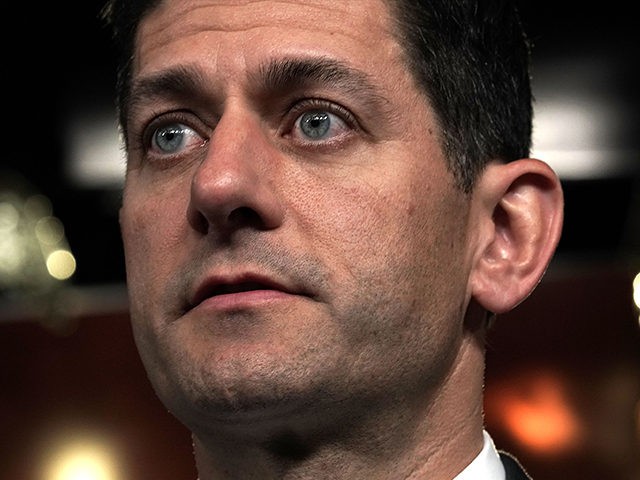 Rep. Paul Gosar (R-AZ) on Monday evening became the first sitting GOP member of the House of Representatives to publicly call for the removal of House Speaker Paul Ryan now, rather than on Ryan’s planned schedule post-election, during an interview onBreitbart News Tonight on SiriusXM.

During a discussion with host and Breitbart News Senior Editor-at-Large Rebecca Mansour about Ryan’s failures on immigration with a looming pro-amnesty discharge petition hanging in the balance, Gosar hammered the entire current leadership team.

Gosar pointed to the founding chairman of the House Freedom Caucus, Rep. Jim Jordan (R-OH), as a solid replacement of Ryan when the time comes. Mansour had asked him about a call from Office of Management and Budget Director Mick Mulvaney—a Freedom Caucus House member before he joined President Donald Trump’s administration—for Ryan to be removed now to force House Democrats to demonstrate in a floor Speakership vote their true allegiance to House Minority Leader Nancy Pelosi.

“There’s a movement of people that are backing Jim Jordan from the Freedom Caucus,” Gosar said. “He would be a great person to get back to having leadership for change and well-statute reform. That’s how you look at this: it’s got to be somebody that is going to bring back good process which brings back good policy which builds good politics. This is problematic.”

News broke this weekend that a group of grassroots conservatives—well more than a hundred of them—are calling to draft Jordan for the speakership.

He further elaborated on his support for Jordan for Speaker.

“I think Jim Jordan is a great person. I think the move is afoot to draft Jim Jordan,” Gosar said. “I think if the votes were already had I think the replacement would have already been there. I think the further this goes down the road—I think this was the latest warning call in regards to that process, on the farm bill. I think it’s time. I think it would energize our base. It would get somebody who would actually get back the jurisdiction and the clout to Congress and the House as equal footings with the Senate and stop taking this crap allowing the Senate to back us into corners and mitigate with ourselves instead of being a fair and equal component like the Senate. This would be the perfect scenario—otherwise we’re going to have the same kind of problems over and over again.”

When Mansour asked again if Gosar was specifically saying call the vote for Speaker now and elect Jordan before the election in November, he replied: “Absolutely.”

“It allows us to pony up but it also allows us to get things done,” Gosar said. “Because we haven’t seen it done.”

Gosar listed a number of things Ryan promised but has not delivered as speaker.

This all comes amid a fraught political time for the House GOP leadership. Ryan, who announced he is not seeking re-election thereby ceding his authority as Speaker by taking a lame duck approach to the midterm elections, is widely viewed as not doing enough to stop an effort by pro-amnesty open borders Republicans to use a discharge petition to force the issue of amnesty onto the floor of the House of Representatives.

“Once again, the damage is done because if you’re a member of the moderates why would you sign onto that when you know you can have the discharge petition come forward if this Goodlatte bill doesn’t come forward? So they’ve played this whole hand out publicly which is totally bananas,” Gosar said.

Meanwhile, Majority Leader Kevin McCarthy—the presumed heir apparent as Speaker—has a major uphill battle ahead of him to convince members like Gosar and other conservatives to vote for him if and when he does have a speakership vote on the floor. While McCarthy is indeed personally close with President Trump, he was thwarted by these same conservatives in his last bid for speakership back in 2015 which cleared the way for Ryan’s ascendancy to third place in the line of the presidential succession. McCarthy could very well win them over in the end, but he has an enormous amount of work to do—and palling around with Ryan, when Ryan is not stopping this discharge petition, does not help his case.

Waiting in the wings is House Majority Whip Steve Scalise, also viewed as a potential contender for the speakership should McCarthy not succeed. Scalise would face many of the same hurdles as McCarthy faces.

It remains to be seen how this all will go down but one thing is certain at this stage: Ryan is in serious trouble, and is very likely to not survive to his desired expiration date at the beginning of next year at the end of this Congress.