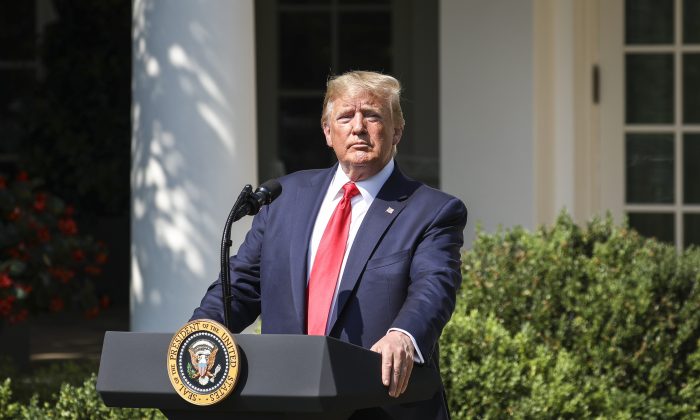 As he addressed the nation in the Diplomatic Reception Room on Aug. 5, Trump also called for the nation to “condemn racism, bigotry and white supremacy.” He said these “sinister ideologies” must be defeated.

The president’s roughly 10 minute long remarks come in the wake of two mass shootings over the weekend in El Paso, Texas, and Dayton, Ohio—committed just 13 hours apart—where more than 80 people were killed or wounded in what Trump described as “2 evil attacks.”

When proposing his plan to better recognize early warning signs, Trump’s first key proposal, he brought up the Parkland shooter in Florida who had multiple red flags but no decisive action was taken.

“I am directing the Department of Justice to work in partnership with local state and federal agencies as well as social media companies to develop tools to detect mass shooters before they strike,” Trump said.

In Trump’s second proposal, he called for an end to the “glorification of violence in our society” and specifically pointed to video games. He noted that cultural change is hard.

“This includes the gruesome and grizzly video games that are now commonplace,” he said. “It is too easy today for troubled youth to surround themselves with a culture that celebrates violence. We must stop or substantially reduce this and it has to begin immediately.”

Trump also warned about the internet and how it provides a “dangerous avenue to radicalize disturbed minds.”

Trump also called on mental health laws to be reformed in his third major proposal. He said the new laws would help to “better identify mentally disturbed individuals who may commit acts of violence.” He also called for such individuals to not only get treatment but, “when necessary, involuntary confinement.”

“Mental illness and hatred pull the trigger, not the gun,” he added.

Trump’s fourth proposal is to enact “Red flag laws” meant to ensure that those who pose a grave risk to public safety do not have access to firearms and if they do, they can be taken “through rapid due process.” Red flag laws are also known as extreme risk protection orders.

In his final proposal, Trump said he would be directing the Department of Justice to propose legislation that would ensure “those who commit hate crimes and mass murders face the death penalty, and that this capital punishment be delivered quickly, decisively, and without years of needless delay.”

Trump concluded his remarks with a call for bipartisanship and said he is “open and ready to listen” to discuss ideas “that will actually work and make a very big difference.”

“Republicans and Democrats have proven that we can join together in a bipartisan fashion to address this plague,” he said.

In Dayton, nine people were killed and dozens more were wounded after a man clad in body armor fired into a downtown district on Aug. 4. He was shot dead by police shortly after opening fire. The suspect, Connor Betts, advocated for gun control and violence against “fascists.”

In El Paso, Texas Gov. Greg Abbott and law enforcement said 20 people were killed and 26 others wounded on Aug. 3 in a shopping center attack. The suspect is currently in custody and his motives are under investigation as a possible hate crime.