Four fundraising events in California over the next two days reflect the amount of support Trump has in the Golden State; chief White House correspondent John Roberts reports.

President Trump sent liberal California activists into a tizzy on Tuesday, as he executed a lunch-dinner-breakfast-lunch fundraising blitz expected to scoop up $15 million from wealthy Republicans in the state in the span of just two days.

A firestorm among Hollywood elites erupted last month as soon as Trump’s Emmy-week visit to the Golden State was announced, with “Will and Grace” star Debra Messing suggesting that anyone attending the fundraising events should be named and shamed publicly. That prompted Trump to call Messing a failed actress dabbling in racism and McCarthyism.

The president’s undeterred push westward came a day after he headlined a fiery rally in New Mexico, long a reliably liberal state that the Trump campaign has hoped to turn red in 2020. Trump has been looking to find the next Wisconsin or Michigan — states that Democrats generally have won in presidential elections but that could surprise under certain conditions, as they did in 2016. Also on the Trump team’s shortlist in the new strategy: Nevada, New Hampshire and Minnesota.

California is decidedly not on that list. Nevertheless, Republican strategists said, the state could still be useful, even if not for its electoral votes.

At his Bay Area fundraiser, Trump told attendees he thinks California is “a beautiful state, but that the system was rigged — the elections were not done fairly — and that it made it very difficult” for him to win, RNC committeewoman Harmeet Dhillon says https://www.mercurynews.com/2019/09/17/trump-arrives-in-bay-area-for-fundraiser-in-first-visit-as-president/ …

Several dozen supporters gathered on the tarmac to watch his arrival while opponents planned demonstrations.

“There’s not been a president in living history that is as unpopular in the state of California as Trump,” said Mike Madrid, a GOP political consultant and outspoken Trump critic. “But, our money spends the same as everyone else’s.”

With protesters not far away, Trump kicked off his moneymaking Tuesday with a $3 million Bay Area luncheon, to be followed by a $5 million Beverly Hills dinner at the home of real estate developer Geoffrey Palmer. He’s expected to bring in an additional $7 million on Wednesday with a breakfast in Los Angeles and luncheon in San Diego.

In all, about 100 protesters lined the road about a mile from Trump’s luncheon site in Portola Valley, with demonstrators inflating giant Baby Trump and Trump Chicken balloons. Protesters were kept at bay along the road by Secret Service agents.

According to The Mercury News, as Trump’s motorcade roared by, filmmaker Ralph King hoisted a hand-written sign reading “you are not welcome here” and said “it’s offensive that Trump is bringing his toxic message into our backyard.” 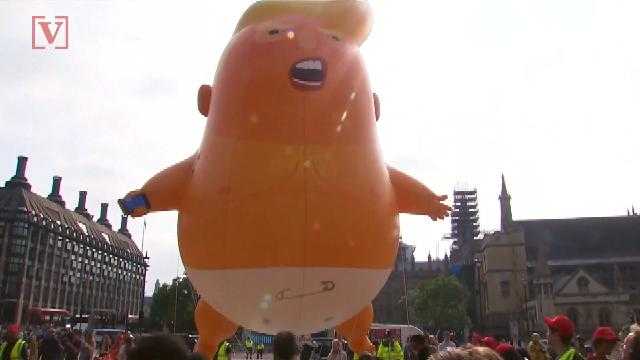 “People think that to be conservative, you’ve got to be racist or rich,” 24-year-old Kenny Camacho, 24, told the paper. “It’s the complete opposite — we’re a silent majority in this country that supports him.”

Trump reportedly told Bay Area supporters that California is “a beautiful state, but that the system was rigged — the elections were not done fairly — and that it made it very difficult” for him to win, RNC committeewoman Harmeet Dhillon said.

California legalized ballot harvesting in 2018. Previously, only a family member or someone living in the same household was permitted to drop off mail ballots for a voter, but the new allowed anyone – including political operatives – to collect and return them for a voter.

Despite holding substantial leads on Election Day, many Republican candidates in California saw their advantage shrink, and then disappear, as late-arriving Democratic votes were counted in the weeks following the election.

“We were only down 26 seats [nationally] the night of the election and three weeks later, we lost basically every California race,” then-outgoing House Speaker Paul Ryan, R-Wisc., told the Washington Post last year. “Point being, when you have candidates that win the absentee ballot vote, win the day of the vote, and then lose three weeks later because of provisionals, that’s really bizarre.” 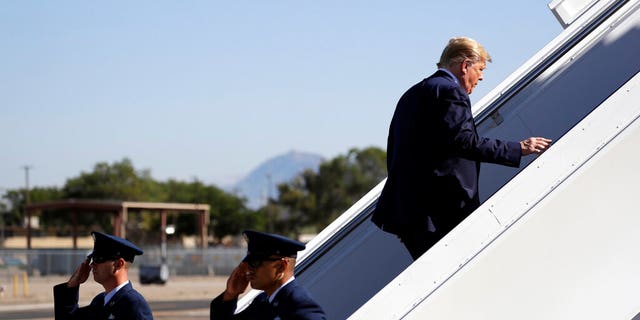 President Donald Trump boarding Air Force One in Albuquerque on his way to California on Tuesday. (AP Photo/Evan Vucci)

The tweet included statistics about the state’s unemployment rate and job creation.

TRUMP OR WARREN? FIGHT ERUPTS OVER WHO HAS THE BIGGER CROWD SIZES

Talking to reporters aboard Air Force One, Trump got in some fresh digs about the state’s problem with homelessness, saying, “We can’t let Los Angeles, San Francisco and numerous other cities destroy themselves by allowing what’s happening.”

Los Angeles Mayor Eric Garcetti, a Democrat, said in a Facebook video post ahead of Trump’s arrival that he hoped the president would work with the city to end homelessness. He said he had not been invited to meet with the president.

The mayor was speaking at one of an eventual 26 housing facilities being built to transition people from life on the streets.

“President Trump: we have to press pause on politics, confront the homelessness crisis, and save lives now,” Garcetti said. “I wanted to talk to him a little bit as if he had come down here to South LA to understand and to hear the challenges we face and ways that Washington, D.C. — instead of demonizing us — might be able to actually come and help us.”

However, Garcetti separately sounded a conciliatory tone when he spoke to reporters. “I know I’m just supposed to punch the president back, but if he is real about it, I’ll believe it when I see it, but I’ll also trust that he wants to save some lives as well,” the mayor said. “Certainly I do. We could do that together.”

California was seen as an incubator for the modern conservative movement that swept the state’s former governor, Ronald Reagan, into the White House in 1980. But, demographic changes and an influx of immigrants and new residents have helped rework the political contours of the country’s most populated state drastically, with the former GOP stronghold of Orange County having more registered Democrats than Republicans as of this summer.

For Republicans, who have been resigned to political irrelevance at the state level, a donation to Trump could amount to its own form of protest. 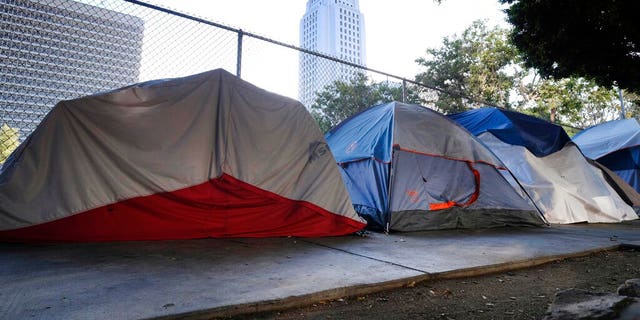 Los Angeles City Hall behind a homeless tent encampment along a street in downtown Los Angeles this past July. (AP Photo/Richard Vogel, File)

“By showing up to a fundraiser deep in the belly of the beast, one is saying: ‘I don’t care what the liberal politicians are saying and I want to show my support for him publicly,'” Dhillon said.

California has long been a key fundraising hotbed for politicians of both parties, which have relied on wealthy industry heads and Hollywood to help finance their political ambitions. But, under Trump, the run-of-the-mill fundraising trip has taken on a complicating dimension because of his harsh criticism of the state’s immigration laws and its forest management practices, which he blamed in part for deadly wildfires.

Earlier this month, Trump fired back at Messing after she tweeted that attendees of the Trump’s California fundraisers should be outed publicly, following a similar push from costar Eric McCormack. 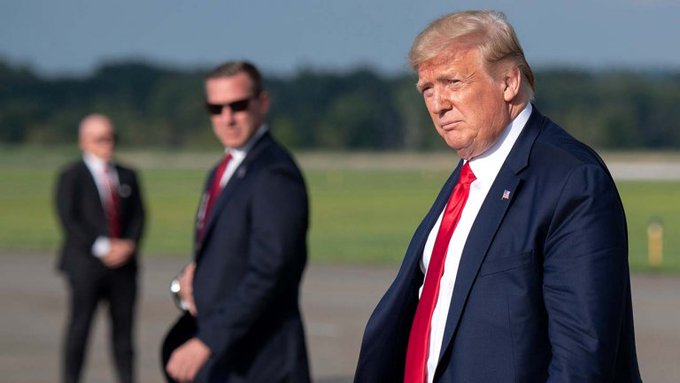 Trump tweeted back: “I have not forgotten that when it was announced that I was going to do The Apprentice, and when it then became a big hit, helping NBC’s failed lineup greatly, @DebraMessing came up to me at an Upfront & profusely thanked me, even calling me ‘Sir.’ How times have changed!”

Bad “actress” Debra The Mess Messing is in hot water. She wants to create a “Blacklist” of Trump supporters, & is being accused of McCarthyism. Is also being accused of being a Racist because of the terrible things she said about blacks and mental illness. If Roseanne Barr….

….said what she did, even being on a much higher rated show, she would have been thrown off television. Will Fake News NBC allow a McCarthy style Racist to continue? ABC fired Roseanne. Watch the double standard!

McCormack later said he never supported blacklists, to which Messing responded, “I couldn’t have said it better.”

Overall, Trump has continued to rake in gobs of cash over a year out from the November 2020 contest, with his campaign and the Republican National Committee pulling in over $210 million since the start of 2019, Federal Election Commission records showed. That’s more than all the current Democrats seeking to replace him raised combined during that period. 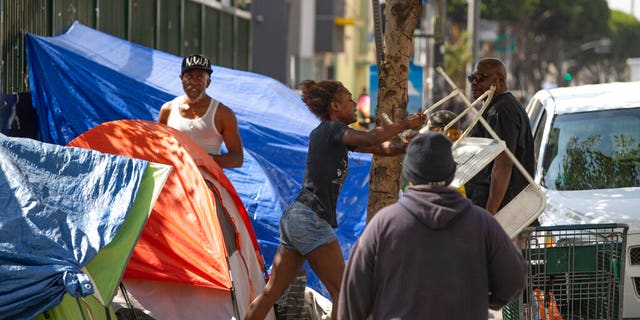 The visit this week marked Trump’s fourth visit to the state during his presidency. Housing and Urban Development Secretary Ben Carson is expected to follow Trump to California, one day behind the president, with visits to San Francisco, Los Angeles and San Diego. A senior HUD official said Carson would speak on a range of issues, including increasing the supply of affordable housing and promoting investment in distressed communities.

Meanwhile, a Republican congressman in California said Tuesday he won’t run for re-election next year, making him the 18th GOP incumbent to bow out of the House of Representatives now that the party is in the minorit

GOP Rep. Paul Cook announced he instead will run for a seat on the San Bernardino County Board of Supervisors in 2020.

California has 53 U.S. House seats, the most of any state. Its Republican congressional delegation was cut in half during the 2018 midterms, leaving the party with just seven of those seats.

Fox News’ Andrew O’Reilly and The Associated Press contributed to this report.