POPE FRANCIS:  “Global financial capital is at the origin of serious crimes not only against property but also against people and the environment,” Francis said, comparing capitalism to “organized crime” committing “ecocide.” Francis added that such crimes committed by corporations should be punished.

~  Capitalism is akin to “organized crime”?!

~  Capitalism must be punished?!

Pope Proposes Making ‘Acts Against The Environment’ A Sin 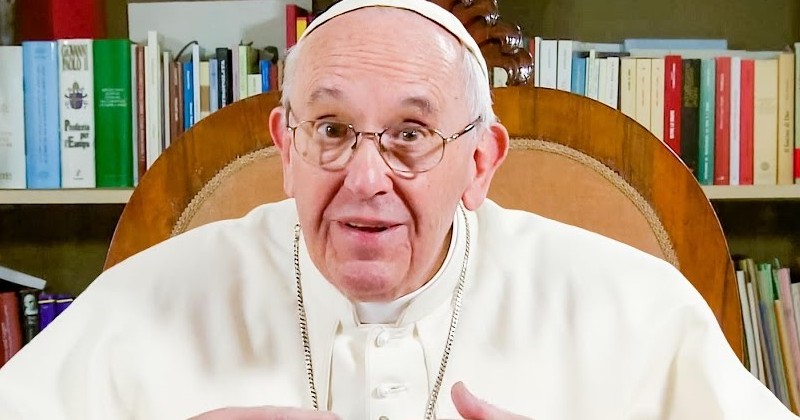 Pope Francis declared Friday that he is considering making it a sin to be un- environmentally friendly, continuing his brand of eco-popery that he has been pushing since becoming the Pontiff in 2013.

Pope Francis, who has made the environment a signature cause of his pontificate, said he was strongly considering adding the category of “ecological sin” to the Catholic Church’s official compendium of teachings.

“We must introduce—we are thinking—into the Catechism of the Catholic Church the sin against ecology, the ecological sin against the common home, because it’s a duty,” the pope said at the Vatican Friday.

He noted that ecological sin would be defined as an “action or omission against God, against others, the community and the environment. It is a sin against future generations and is manifested in the acts and habits of pollution and destruction of the harmony of the environment.”

In the same speech he said that developments in politics and business remind him of dark episodes from humanity’s past, including Adolf Hitler’s Third Reich.

“It is not coincidental that at times there is a resurgence of symbols typical of Nazism,” Francis said as he decried the “culture of waste and hate” represented by contemporary politicians who spew derogatory and racists attacks against homosexuals, gypsies, Jewish people, and others. “I must confess to you,” he continued, “that when I hear a speech (by) someone responsible for order or for a government, I think of speeches by Hitler in 1934, 1936.”

Francis also blamed global capitalism for ‘plundering the earth’ at the expense of the poor and future generations.

“Global financial capital is at the origin of serious crimes not only against property but also against people and the environment,” Francis said, comparing capitalism to “organized crime” committing “ecocide.” Francis added that such crimes committed by corporations should be punished.

The Pope has been talking about environmentalism for some time. In 2015, he described global warming as a major threat to all life on Earth, adding that the use of fossil fuels (presumably put here by God?) should be curtailed.

Furthermore, in 2016, the pope added “care for our common home,” to the Catholic Church’s traditional seven works of mercy, as well as adding it to the Beatitudes, the core set of Christian ideals such as meekness and mercy enunciated by Jesus in the Bible.

He noted that “Blessed are those who protect and care for our common home.”

In June this year, the pope declared a global “climate emergency,” warning of the dangers of ‘global heating’ and said that a failure to act urgently to reduce greenhouse gases would be “a brutal act of injustice toward the poor and future generations”.

He endorsed a “radical energy transition” advocated by the the Intergovernmental Panel on Climate Change, saying that “Future generations stand to inherit a greatly spoiled world.”

“Our children and grandchildren should not have to pay the cost of our generation’s irresponsibility,” he said, adding “Indeed, as is becoming increasingly clear, young people are calling for a change.”

He followed up in September urging governments around the world to take “drastic measures” to combat global warming and reduce the use of fossil fuels, again saying the world was experiencing a climate emergency.

“Governments will have the responsibility of showing the political will to take drastic measures to achieve as quickly as possible zero net greenhouse gas emissions and to limit the average increase in global temperature to 1.5 degrees Celsius with respect to pre-industrial levels, in accordance with the Paris Agreement goals.” he said.

While radicals suggest there are only 12 years left before the world succumbs to total destruction, more serious research posits that reducing carbon emissions to ‘net zero’ would have a devastating impact on many countries, effectively killing their economies, halting development, and immediately triggering social emergencies such as food and energy shortages.