The Democrats have sunk the economy with their anti-Constitutional stay-at-home orders. Consciously so.

Fear tactics used at their Democrat best, scare the heck out of people, sink the economy, and then leave us with more fears; their mode and message is a negative one – one of fear and failure and  powerlessness.

The only power they present is that of themselves – as they step to the mic spouting off our supposed need for their controls over every aspect of our lives – We are too “sheepy” to know what’s best for ourselves, and those misinformed are preyed upon, and easily fall for the verbal trap of the Liberals.

The Liberals are not about to let such a (deliberate) opportunity go to waste,  so they overplayed their hand, using the COVID-19 virus to incite fear, control the masses, tank the stock market and destroy the economy – all to blame Trump, of course!

They continue their desperation, doing whatever it takes to make President Trump appear incompetent, and defeat him. The 2020 Election is breathing down their necks.

~ Their Russian Hoax didn’t work. (It’s backfiring on them big time this week!)

~ Their destroying the economy will not work.

Woe to you Democrats come this fall!

and woe to the main stream media who repeat the Democrat lies and agenda. 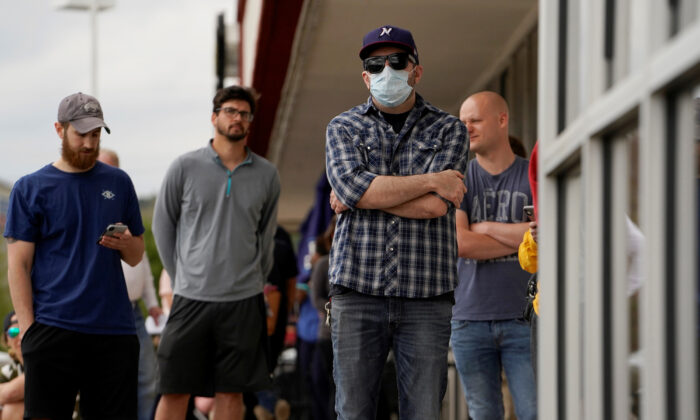 People who lost their jobs wait in line to file for unemployment at an Arkansas Workforce Center in Fayetteville, Ark., on April 6, 2020. (Nick Oxford/Reuters)
ECONOMY

Battering the U.S. economy, COVID-19 shutdowns and destruction of demand have erased a staggering 20.5 million jobs in April, the steepest plunge in nonfarm payrolls since the Great Depression.

In just one month—April—the unemployment rate increased by 10.3 percentage points, which is the largest over-the-month increase in the history of the series, which goes back to January 1948.

The number of unemployed persons, meanwhile, rose by 15.9 million to 23.1 million in April.

“The changes in these measures reflect the effects of the coronavirus (COVID-19) pandemic and efforts to contain it,” the Labor Department said, noting a sharp drop in jobs across all major industries, “with particularly heavy job losses in leisure and hospitality.”

Employment in the hardest-hit sector of leisure and hospitality fell by 7.7 million, or 47 percent, in April, with nearly 75 percent of the drop occurring in food services and drinking establishments.

“Our economy is on life support now,” said Erica Groshen, a former commissioner of the Labor Department’s Bureau of Labor Statistics. “We will be testing the waters in the next few months to see if it can emerge safely from our policy-induced coma,” added Groshen, who is now a senior extension faculty member at the Cornell University School of Industrial and Labor Relations.

In another sign the pandemic continues to wreak havoc on the economy, more than 3 million workers in the United States filed unemployment claims during the week ending May 2, bringing the number to more than 33 million in the past seven weeks, which is around 21 percent of the workforce.

Meanwhile, U.S. private employers laid off a record 20,236,000 workers in April, according to the ADP National Employment Report released May 6 (pdf).

“Job losses of this scale are unprecedented. The total number of job losses for the month of April alone was more than double the total jobs lost during the Great Recession,” said Ahu Yildirmaz, co-head of the ADP Research Institute.

The sharp plunge in private payrolls suggests that the road to economic recovery may be steeper than previously believed.

“One thing for sure is that this pandemic health crisis has produced depression-magnitude job losses, which means this recovery is going to take longer than many are thinking,” said Chris Rupkey, chief economist at MUFG in New York.

“The Great Depression lasted three-and-a-half years, and it will be a miracle if the economy gets anywhere near back to normal within the next couple of years.”

Some argue, however, that April could mark the trough in job losses as more businesses access relief funds, especially those under the Paycheck Protection Program that lets firms not have to pay back loans if they don’t lay off workers.

Treasury Secretary Steven Mnuchin on April 26 said he expects the U.S. economy will “really bounce back” as lockdowns ease and people get back to work.

“I think as we begin to reopen the economy in May and June, you’re going to see the economy really bounce back in July, August, September,” Mnuchin told Fox News.

“And we are putting in an unprecedented amount of fiscal relief into the economy,” he said. “You’re seeing trillions of dollars that’s making its way into the economy, and I think this is going to have a significant impact.”

The longest-ever employment boom in U.S. history started in September 2010 and added some 22 million jobs. It was cut short in February by a shutdown of much of the economy alongside strict social-distancing measures put in place after the outbreak of the CCP virus, commonly known as the novel coronavirus.