“Today, I’m declaring a simple but vital national goal: The United States will be the world’s premier pharmacy, drugstore, and medical manufacturer,” the president said in a speech at the plant. “We’re bringing our medicines back and many other things too.”
– President Trump 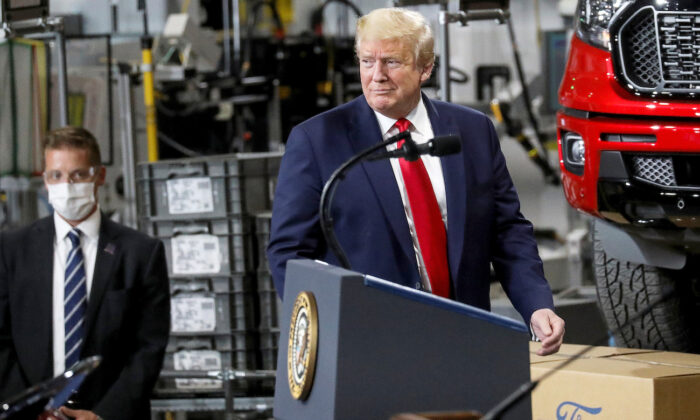 President Donald Trump arrives to speak during a visit at the Ford Rawsonville Components Plant, which is making ventilators and medical supplies, during CCP virus pandemic in Ypsilanti, Michigan, on May 21, 2020. (Leah Millis/Reuters)

Trump Wants US to Be World’s Number One Medical Manufacturer

President Donald Trump on Thursday said he wanted the United States to be the world’s number one medical manufacturer, as he encouraged the reopening of America and praised automaker Ford during a visit to one of its plants in Michigan.

Trump visited Ypsilanti, outside Detroit, to tour a Ford plant that has partly converted to manufacturing ventilators and personal protective equipment (PPE) amid the pandemic caused by the CCP (Chinese Communist Party) virus, a novel coronavirus from Wuhan, China. Earlier in the day, Trump held a roundtable discussion with African American leaders to talk about vulnerable populations hit by the CCP virus.

“Today, I’m declaring a simple but vital national goal: The United States will be the world’s premier pharmacy, drugstore, and medical manufacturer,” the president said in a speech at the plant. “We’re bringing our medicines back and many other things too.”

“We must produce critical equipment, supplies, pharmaceuticals, technologies for ourselves,” Trump added. “We cannot rely on foreign nations to take care of us, especially in times of difficulty.”

Trump said that the global CCP virus pandemic has “proven once and for all that to be a strong nation, America must be a manufacturing nation.”

“True national independence requires economic independence,” Trump said. “From day one, I’ve been fighting to bring back our jobs from China and many other countries.”

At the Ford plant, the president praised the company for its hard work, patriotism, and talent in manufacturing ventilators and PPE for medical personnel and first responders.

“Because of the virus, Ford was forced to stop automobile production for the first time since World War Two,” Trump said. “That’s something. But you did not despair. Your company leadership called up the White House and asked the most American of all questions: ‘How can we help?’”

The United States is now, in part thanks to Ford’s effort, in a position to help other countries with ventilators and other equipment, Trump said.

“Thanks to you, we’ll stockpile over 100,000 new ventilators in the next few months,” he said. “And I’ve offered over 14,000 [ventilators] to friends and allies all around the world, and they desperately need them. Just this week, I spoke to five countries. They call me—is it possible to get ventilators to them. And I’m sending them over.”

“America is very proud of Ford. Right here at the Rawsonville Component Plant, you’re building a great medical arsenal to defeat the virus and cement America’s place as the leading manufacturer and exporter of ventilators anywhere in the world,” Trump said.

Ford in late March said it planned to start production of some 50,000 ventilators on April 20 and was set to deploy 500 United Auto Workers (UAW) union employees.

Trump praised multiple automakers including Ford, General Motors, General Electric, and Fiat Chrysler, for “blazing a trail to safely restart America’s economic engines,” and continued to call for a reopening of America.

“You are demonstrating that we can open our country while taking precautions like social distancing, daily medical screenings, strict hygiene,” he said.

Gary Brabant, a technician at the plant, said that he was initially anxious when called to work at the plant but was promptly reassured.

“I didn’t want to get sick or take it home to my family. However, upon arriving here on the first day, I felt safe due to the new policies and procedures put forth by our UAW health and safety team,” Brabant said. “It’s a great feeling to know everything we are doing here and each assembly we make is saving somebody’s life.”

Ford started resuming operations in the United States on May 18, which includes restarting vehicle production at key plants and bringing back about 12,000 employees who are not able to do their jobs off-site.

Trump said that the United States “wasn’t meant to be shut down,” and earlier told reporters that he believed states have to start opening up.

“A never-ending lockdown would invite a public health calamity. To protect the health of our people, we must have a functioning economy,” Trump told reporters.

“Americans who need and want to return to work should not be vilified; they should be supported,” he later added. “Unlike many politicians and journalists, for those who earn a living with their own two hands, working remotely is just not an option. You don’t have the option of doing that. Our plan emphasizes safety and protection for returning employees.”

Breaking News › Forums › TRUMP: US to Become #1 in Pharmaceuticals and Medical Mfg.