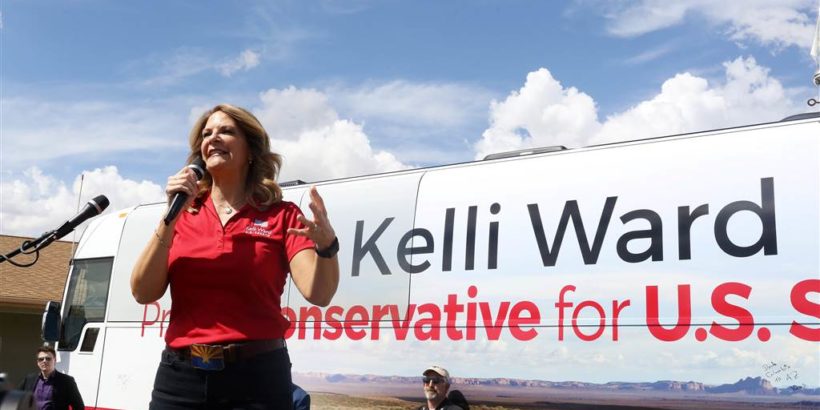 Arizona GOP Chairwoman Kelli Ward said that her state’s Republican Electoral College electors, who on Monday cast their votes for President Donald Trump, believe they are the electors that “represent the legally cast votes in our state.”

Republican electors in seven states, including Arizona, on Monday cast their Electoral College-style votes for Trump, which critics argue are merely symbolic and have no force of law. Meanwhile, in the same seven states, which have officially certified the election for presidential candidate Joe Biden, formally appointed Democrat electors to cast their votes for the former vice president, setting up a possible showdown when Congress meets on Jan. 6 to review the potentially competing sets of electoral votes.

Ward, who serves as one of Arizona’s 11 GOP electors, told NTD in an interview Monday that she believes Republican electors in all the states in question share her perspective that they represent the legitimately-cast votes in the November election, which she said was marred by irregularities and allegations of fraud.

“It was required as part of our duties so that, on January 6, the correct electors can be recognized whenever Congress gets back together,” Ward said. “If the true electors were not sent, then that would also create more chaos than we already have,” she added, echoing the perspective of GOP representatives in other battleground states who described the reasoning behind casting a competing set of electoral votes.

“We took this procedural vote to preserve any legal claims that may be presented going forward,” said Bernie Comfort, Trump’s Pennsylvania campaign chairman, in a statement put out by the Pennsylvania GOP. “This was in no way an effort to usurp or contest the will of Pennsylvania voters.”

David Shafer, the Chairman of the Georgia Republican Party, said in a statement on Twitter that because Trump’s lawsuit contesting the Georgia election is still pending, the Republican nominees for Presidential Elector convened on Monday to cast their votes for Trump and Vice President Mike Pence.

“Had we not [met] today and cast our votes, the President’s pending election contest would have been effectively mooted. Our action today preserves his rights under Georgia law,” Shafer said.

Republican electors in Pennsylvania, Michigan, Arizona, Georgia, Wisconsin, New Mexico, and Nevada all cast alternative votes for Trump on Monday. While these GOP votes did not appear to have the backing of any governor or state legislature, it is presumed these votes will be transmitted to Congress for consideration during the Joint Session of Congress when the House of Representatives and Senate meet on Jan. 6 to count the votes and declare a winner of the presidential contest.

The Epoch Times reached out to the Republican majority leaders in these states asking whether the GOP electoral votes had the formal support of any legislators, but did not immediately get a response.

According to the U.S. Code, when the House and Senate meet, they have to look into “all the certificates and papers purporting to be certificates of the electoral votes.” Several Republican members of Congress have said they would attempt to object to the counting of the Electoral College votes for some states, which would then trigger a series of debates and votes.

According to the York Daily Record, six Republican congressman from Pennsylvania have said they would vote against the formally certified electoral vote in their home state.

“The only date in the Constitution is January 20. So we have more than enough time to right the wrong of this fraudulent election result and certify Donald Trump as the winner of the election,” Miller said on “Fox & Friends,” referring to Inauguration Day.

“As we speak today, an alternate slate of electors in the contested states is going to vote, and we’re going to send those results up to Congress,” he added.

“Under the law, both the House and Senate would need to agree to object to the real electors and accept the fake electors. There is 0.00 chance the House reverses the election,” he wrote on Twitter.

Since Election Day, Trump and third-party groups have pursued legal challenges to the outcome of the election in six states. None of the efforts have so far borne fruit, including an interstate Supreme Court challenge brought by Texas and backed by 19 Republican attorneys general.

Bowen Xiao and Jack Phillips contributed to this report.