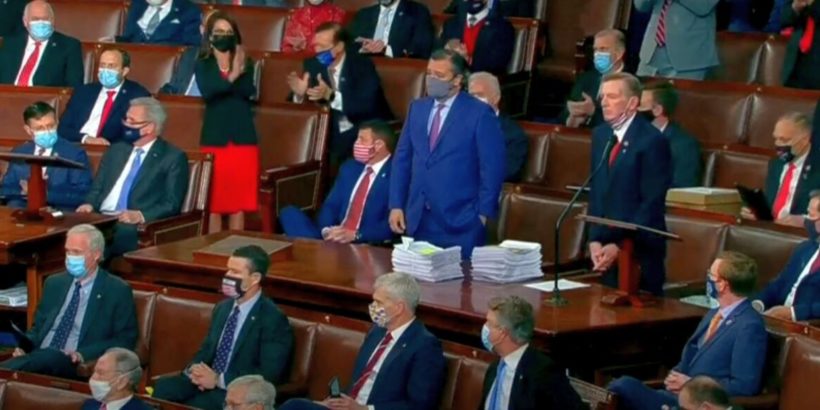 More than 60 Republican House representatives led by Rep. Paul Gosar (R-Ariz.) and one senator objected to Arizona’s 11 electoral votes during the Joint Session of Congress on Wednesday.

Their objection “complies with the law,” said Vice President Mike Pence, the president of the Senate during the Joint Session of Congress.

Gosar said that the GOP representatives and a senator objected “on the ground that they were not under all of the known circumstances, regularly given.”

Sen. Ted Cruz (R-Texas) stood on the floor, meaning he was the GOP senator who objected to Arizona’s votes. Sen. Roger Marshall (R-Kan.) said he would join in Arizona’s electoral objection. Marshall also said he’ll object to the electoral votes in Georgia and Pennsylvania, according to CNN. “That’s absolutely correct,” he told the network about objecting to those three states.

Gosar and Cruz were met with a standing ovation from what appeared to be GOP House members.

Pence then ordered the two chambers of Congress to carry out a debate on the votes in Arizona. A several-hour debate is scheduled on the state’s electoral votes before a simple majority vote is to be held.

Before the session started, Pence released a statement through his office that the Constitution prevents him from rejecting electoral votes, responding to growing pressure from President Trump and other Republicans that he should take action. Some legal experts have said it’s not within the purview of Pence’s office to reject electoral slates.

“It is my considered judgment that my oath to support and defend the Constitution constrains me from claiming unilateral authority to determine which electoral votes should be counted and which should not,” said the vice president.

Over the past weekend, Cruz and about 10 other senators said they would lodge objections to the electoral votes for key states.

“I think we in Congress have an obligation to do something about that; we have an obligation to protect the integrity of the democratic system,” he told Fox Business on Sunday, referring to numerous allegations of election fraud and irregularities. The Republican senator noted that numerous Americans do not believe the Nov. 3 presidential election results were valid as Trump and his team have called for courts and state legislatures to overturn key states’ electoral results.

The move is not supported by all Republican lawmakers. The Senate’s No. 2 Republican, Majority Whip John Thune (R-S.D.), told reporters in December that their effort would most likely fail, while Sen. Mitt Romney (R-Utah) said over the past weekend the objection is an “egregious ploy.”