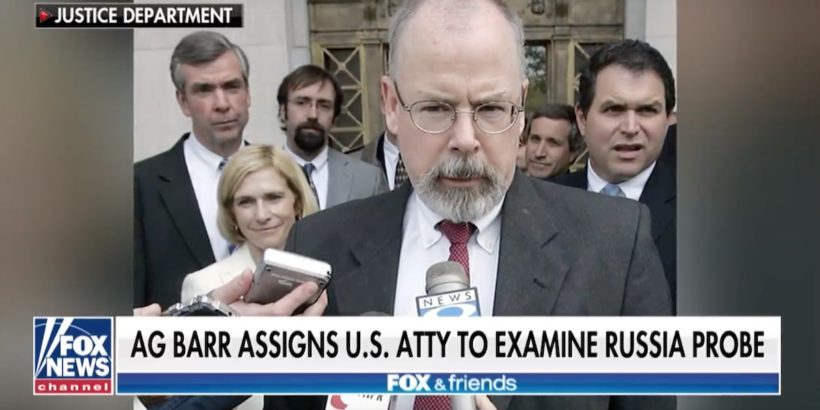 US Attorney John Durham is running an investigation into the Russia hoax that has been almost airtight. A fragment of information on his activities, however, comes our way via Australian media.

Alexander Downer’s meeting with George Papadopoulos at the Kensington Wine Rooms in 2016 played a key role in providing a rationale for an FBI investigation of the Trump campaign, including FISA warrants allowing wiretapping.  At the time, Downer was the Australian High Commissioner (ambassador) to the UK, and had been Australia’s foreign minister earlier, a very senior diplomat to be entertaining a young Trump campaign volunteer.

The meeting, also attended by Aussie diplomat Erika Thompson, elicited the information from Papadopoulos that he had been told by mysterious Maltese Professor Joseph Mifsud that the Russians had a trove of Hillary Clinton’s missing emails. When that information was duly passed along and reached the US, it became justification for investigating “collusion with Russia.”

Over last weekend, Downer sat for an interview with Sky News of Australia, and via paywalled News Corp newspapers, we learn:

Former Australian foreign affairs minister Alexander Downer has reportedly told a US investigator he did not try to bring down Donald Trump during the 2016 US presidential election.

“Try to bring down” is language to could hide a lot of other activity.

US Attorney John Durham, tasked with investigating the origins of the probe into Russian influence in the election, is understood to have interviewed Mr Downer in London last month and reviewed a confidential Australian diplomatic cable to clarify Australia’s role, The Australian reports.

Mr Durham is also believed to have interviewed Australian diplomat Erika Thompson, who arranged and ­attended the Downer-Papadopoulos meeting.

He is understood to have asked Mr Downer whether he knew Joseph Mifsud, the Maltese academic who told Mr Papa­dopoulos the Russian govern­ment had “dirt” on Hillary Clinton.

It is unclear where the above information above comes from, because in the interview with Sky News, Downer dummied up, and cited boilerplate diplomatic language:

In an interview with Sky News on Sunday, Mr Downer dodged questions about his role in spurring the Russian collusion investigation.

Mr Downer said he would not talk about the meeting in London’s Kensington Wine Rooms in 2016 which set off the chain reaction resulting in the investigation.

“There is now in the United States yet another inquiry into this and (Australian Prime Minister) Scott Morrison has said Australia will fully co-operate with that inquiry so that’s what the government is doing and so the plan is to say nothing during the course of that inquiry,” he said.

Papadopoulos has said that he believes his talk with Downer was recorded, something already denied by Aussie diplomats: “Diplomacy isn’t done that way.”

Papadopoulos reacted to news of the Sky News Downer interview on Twitter:

Alexander Downer, the Clinton errand boy whose bizarre behavior at my meeting with him sparked the Durham probe, was on Australian tv today ranting like a lunatic against Trump and me. The probe is closing in on him. He’s feeling the heat.

Stay tuned. Downer’s stonewalling of most questions suggests that he is taking the investigation very seriously indeed.