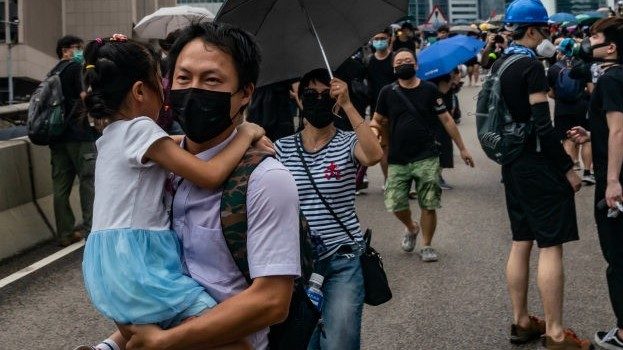 Hong Kong’s juvenile courts are stripping custody from parents of minors who have participated in pro-democracy protests, the city’s RTHK broadcaster reported this week.

Many of the pro-democracy movement’s most prominent members were teenagers when the Umbrella Movement of 2014 began. The current series of protests have attracted even younger demonstrators and resulted in the arrests of individuals as young as 12 years old.

On Monday, the first day of school in the autonomous region, thousands boycotted classes in universities and secondary schools to demand the Communist Party-controlled government address their demands. After thirteen weeks of protests, those calling for greater civic and political freedoms in Hong Kong have pivoted towards demonstration tactics that make it difficult for the government to carry on normally without addressing the protesters.

In response, Hong Kong has deployed police to violently attack those taking to the streets or any bystander unfortunate enough to be in the vicinity of a protest. This weekend, police reportedly stormed Mass Transit Rail (MTR) stations and began beating people sitting in trains without regard for evidence that would either link them to the protest movement of identify them as passersby. Police then banned medical workers from entering the train stations to administer first aid to those they assaulted, triggering a protest by Hong Kong’s healthcare workers.

Seemingly to deter more protest participation, Hong Kong’s courts have now begun stealing children out of their parents’ hands and placing them in government homes. RTHK reported on Saturday that the Juvenile Court at the Kowloon City Magistracy forced three children, ages 13 to 15, into a “juvenile home” after the children were arrested near the Sham Shui Po police station last week. The children were near the vicinity of a public screening organized by protesters of the documentary Winter on Fire, which tells the story of the anti-Russia movement that expelled President Viktor Yanukovych.

“[M]agistrate Joseph To expressed doubt, and questioned why they had to watch the documentary out on the streets, when there were plenty of videos available online. He added that ‘there must be a reason’ why [the children] had been arrested by police,” RTHK reported.

The three children, two girls and a boy, argued that they were walking home when they were arrested and that the gas mask one of them had in their possession was necessary even when not participating in protests because police had become so liberal in spraying tear gas in public. Their arguments did not dissuade the court, however, which decided that “their parents had failed to keep them in check,” according to the broadcaster.

The custody battle sends a chilling message to parents in Hong Kong: allowing your child to speak freely, or even be in the vicinity of someone speaking freely, could result in the loss of legal custody.

As of last week, police had documented the arrest of 15 underaged protesters between the ages of 12 and 15. The 12-year-old was arrested last weekend during a violent crackdown on protesters that featured the first gunshots fired during this round of protests. Police documented the use of 215 rounds of tear gas and 74 rubber bullets against the pro-democracy movement.

The 12-year-old boy was released and sent to a hospital after complaining of a sore throat, a common issue for those attacked with tear gas. He is reportedly scheduled to start school this week. The South China Morning Post reported that police tied up the boy with cable ties and attempted to block social workers from identifying and helping him.

The number of minors arrested likely skyrocketed this week, as police told reporters they arrested 159 people this weekend for participating in pro-democracy events intended to shut down Hong Kong International Airport and the MTR system. The unrest continued on Monday, Hong Kong’s first day of school, as 30,000 people organized at Chinese University of Hong Kong to support the protest movement. Many were university students or incoming first-years.

Speaking to RTHK, one protester, an unidentified girl, said the protests were necessary to avoid Hong Kong’s becoming “like Xinjiang,” the Chinese province where the Communist Party has placed millions in concentration camps.

The Chinese University of Hong Kong was among at least 11 school venues protesters flooded on Monday. According to the South China Morning Post, more than a thousand secondary school students have joined the boycott. Secondary schools in Hong Kong parallel high schools in America, and the students are typically between 12 and 17 years old. The Post found at least one 13-year-old among the protesters.

Hong Kongers began protesting by the millions in early June to oppose a proposed bill that would allow China to extradite individuals, regardless of Chinese citizenship, into the notoriously violent Chinese prison system if accused of violating Communist Party law. Forcing people in Hong Kong to face consequences for not abiding by Communist law violates the “One Country, Two Systems” policy the United Kingdom left in place when it gifted Hong Kong to the Communist Party in 1997.

The Hong Kong protesters are demanding a full withdrawal of the extradition bill, free and fair elections for every seat on the Legislative Council, freedom for political prisoners, an independent probe into police brutality, and an apology from the government for calling the June 12 rally a “Riot.”