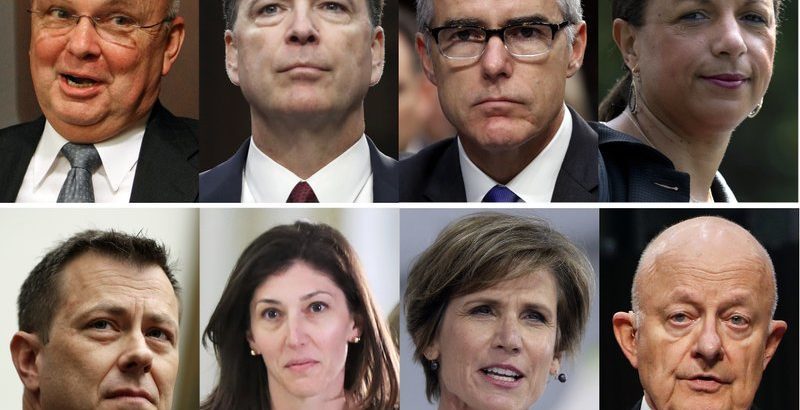 Larry Johnson released an excellent report a few days ago at the Gateway Pundit where he lists the eight cases in the Mueller report where the Deep State tried to tie President Trump and his campaign and administration to Russians.  Of these eight events, six were set ups by the Deep State.

Thanks to Robert Mueller we have clear evidence of a conspiracy against Trump. Mueller’s investigation of Trump “collusion” with Russia prior to the 2016 Presidential election focused on eight cases:

Events at the Republican Convention

One simple fact emerges–six of the eight cases or incidents of alleged Trump Campaign interaction with the Russians investigated by the Mueller team, the pitch to “collude” with the Russian Government or Putin originated with FBI informants, MI-6 assets or people paid by Fusion GPS, not Trump or his people. There is not a single instance where Donald Trump or any member of his campaign team initiated contact with the Russians for the purpose of gaining derogatory information on Hillary or obtaining support to boost the Trump campaign. Not one.

Simply put, Trump and his campaign were the target of an elaborate, wide ranging covert action designed to entrap him and members of his team as an agent of Russia.

We do not need to say anything about Dmitri Simes, who was unfairly smeared by even being named as target in the investigation. And the “non” events at the Republican Convention, were pure nonsense.

THE PROPOSED TRUMP TOWER PROJECT IN MOSCOW, according to Mueller’s report, originated with an FBI Informant–Felix Sater. Mueller was downright dishonest in failing to identify Sater as an FBI informant. Sater was not just a private entrepreneur looking to make some coin. He was a fully signed up FBI informant. Sater’s status as an FBI snitch was first exposed in 2012. Sater also was a boyhood chum of Michael Cohen, the target being baited in this operation. Another inconvenient fact excluded from the Mueller report is that one of Mueller’s Chief Prosecutors, Andrew Weissman, signed the deal with Felix Sater in December 1998 that put Sater into the FBI Informant business.

All suggestions for meeting with the Russian Government, including Putin, originated with Felix Sater. The use of Sater on this particular project started in September 2015.

GEORGE PAPADOPOLOUS. Papadopolous was targeted by British and U.S. intelligence starting in late December 2015, when he is offered out of the blue a job with the London Centre of International Law and Practice Limited (LCILP) , which has all the hallmarks of a British intelligence front. It is Joseph Mifsud, working for LCILP, who introduces the idea of meeting Putin following a lunch with George in London.

And it is Mifsud who raises the possibility of getting dirt on Hillary. During Papadopolous’ next meeting with Mifsud, George writes that Mifsud:

leaned across the table in a conspiratorial manner. The Russians have “dirt” on Hillary Clinton, he tells me. “Emails of Clinton,” he says. “They have thousands of emails.”

More than three weeks before the alleged Russian hack of the DNC, Mifsud is peddling the story that the Russians have Clinton’s emails. Conspiracy?

CARTER PAGE. The section of the Mueller report that deals with Carter Page is a total travesty. Mueller and his team, for example, initially misrepresent Page’s status with the Trump campaign–he is described as “working” for the campaign, which implies a paid position, when he was in fact only a volunteer foreign policy advisor. Mueller also paints Page’s prior experience and work in Russia as evidence that Page was being used by Russian intelligence, but says nothing about the fact that Page was being regularly debriefed by the CIA and the FBI during the same period. In other words, Page was cooperating with US intelligence and law enforcement. But this fact is omitted in the Mueller report. The Christopher Steele dossier was used as “corroborating” intel to justify what was an illegal FISA warrant. The FBI lied about the veracity of that dossier. Conspiracy?

TRUMP TOWER MEETING (JUNE 9, 2016). This is another glaring example of a plant designed to entrap the Trump team. Mueller, once again, presents a very disingenuous account:

On June 9, 2016, senior representatives of the Trump Campaign met in Trump Tower with a Russian attorney expecting to receive derogatory information about Hillary Clinton from the Russian government. The meeting was proposed to Donald Trump Jr. in an email from Robert Goldstone, at the request of his then-client Emin Agalarov, the son of Russian real-estate developer Aras Agalarov.

The real problem is with what Mueller does not say and did not investigate. Mueller conveniently declines to mention the fact that Veselnitskaya was working closely with the firm Hillary Clinton hired to produce the Steele Dossier. Even the corrupt NBC News got these damning facts about Veselnitskaya on the record:

The information that a Russian lawyer brought with her when she met Donald Trump Jr. in June 2016 stemmed from research conducted by Fusion GPS, the same firm that compiled the infamous Trump dossier, according to the lawyer and a source familiar with the matter.

In an interview with NBC News, Russian lawyer Natalia Veselnitskaya says she first received the supposedly incriminating information she brought to Trump Tower — describing alleged tax evasion and donations to Democrats — from Glenn Simpson, the Fusion GPS owner, who had been hired to conduct research in a New York federal court case.

PAUL MANAFORT. If Paul Manafort had rebuffed Trump’s offer to run his campaign, he would be walking free today and still buying expensive suits and evading taxes along with his Clinton buddy, Greg Craig. Instead, he became another target for DOJ and intel community and the DNC, which were desperate to portray Trump as a tool of the Kremlin. Thanks to John Solomon of The Hill, we now know the impetus to target Manafort came from the DNC:

The boomerang from the Democratic Party’s failed attempt to connect Donald Trump to Russia’s 2016 election meddling is picking up speed, and its flight path crosses right through Moscow’s pesky neighbor, Ukraine. That is where there is growing evidence a foreign power was asked, and in some cases tried, to help Hillary Clinton.

In its most detailed account yet, Ukraine’s embassy in Washington says a Democratic National Committee insider during the 2016 election solicited dirt on Donald Trump’s campaign chairman and even tried to enlist the country’s president to help.

In written answers to questions, Ambassador Valeriy Chaly’s office says DNC contractor Alexandra Chalupa sought information from the Ukrainian government on Paul Manafort’s dealings inside the country, in hopes of forcing the issue before Congress.

Manafort was not colluding, but the Clinton campaign and the Obama Administration were colluding with Ukraine.

GENERAL MICHAEL FLYNN.  This is the biggest travesty. Flynn was being targeted by the intel community with the full collaboration of the FBI. Thanks to his new attorney, the Honey Badger Sidney Powell, there is an avalanche of evidence showing prosecutorial misconduct and an unjustified, coordinated effort by the Obama team to frame Flynn as catering to the Russians. It is a lie and that will be fully exposed in the coming weeks.

In summary, Johnson believes the Intel community and the DOJ/FBI may begin throwing each other under the bus in efforts to survive the sinking of the Deep State Titantic –

Any fair reporter with half a brain would see these events as pointing to a conspiracy. But not the liars at the New York Times. But the Times does tip us off to the upcoming mad scramble for life boats. It will it the FBI and DOJ against the DNI, the CIA and NSA. According to the Times:

It is not clear how many people Mr. Durham’s team has interviewed outside of the F.B.I. His investigators have questioned officials in the Office of the Director of National Intelligence but apparently have yet to interview C.I.A. personnel, people familiar with the review said. Mr. Durham would probably want to speak with Gina Haspel, the agency’s director, who ran its London station when the Australians passed along the explosive information about Russia’s offer of political dirt.

There is no abiding affection between the FBI and the CIA. They mix like oil and water. In theory the FBI only traffics in “evidence.” The CIA deals primarily with well-sourced rumors. But the CIA will argue they were offering their best judgement, not a factual conclusion. Brennan and Clapper will insist they were not in a position to determine the “truth” of what they were reporting. It is “intel” not evidence.

The Horowitz report will not deal with the CIA and NSA directly. Horowitz can only point out that the FBI folks insisted that they were relying on the intel community and had no reason not to trust them. This is likely to get ugly and do not be surprised to see the intel folks try to throw the FBI under the bus and vice versa. Grab the popcorn.