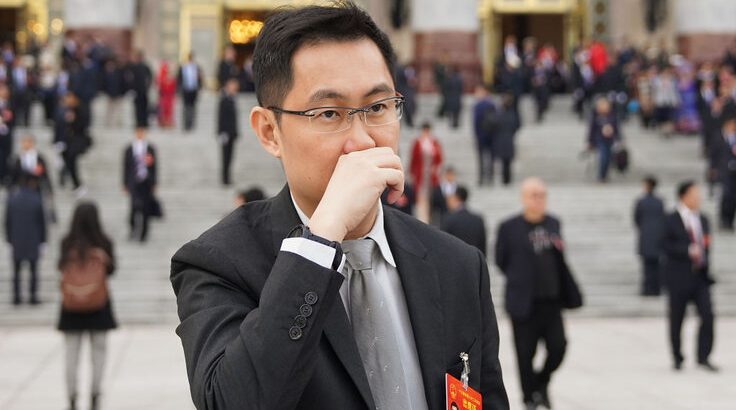 A Chinese tech billionaire whose company censors the internet in China has donated millions of dollars to MIT and Princeton University and advises two Ivy League schools on expanding their presence in China.

Ma Huateng, the founder of Tencent, has given at least $5 million to Princeton through his personal charity since 2017 and $5 million since 2018 to MIT, according to previously unreported Department of Education records. Ma also serves on the advisory boards for the Yale Center Beijing and the Cornell China Center, where he and other Chinese business leaders advise the schools on developing partnerships in China. Tencent’s charity contributed $900,000 to Columbia University in 2017, according to the Department of Education records.

As Ma forged ties to the schools, the Chinese government enlisted Tencent and other tech firms as part of an ambitious plan to dominate the field of artificial intelligence by 2030. The Defense Department said in a report last year that China plans to use technology developed by the firms for both commercial and military purposes.

In addition to national security concerns, the schools’ ties to Tencent are also at odds with their purported liberal values. Tencent, which Ma founded in 1998, has censored criticism of the government on its platforms and snoops on users of its text message service, WeChat. The company reportedly surveilled foreign users of WeChat in order to refine its censorship capabilities in China. Tencent censored National Basketball Association games in 2019 after an executive for the Houston Rockets franchise expressed support for pro-democracy protesters in Hong Kong. The company pulled Boston Celtics games in October after one of the franchise’s players, Enes Kanter Freedom, accused the Chinese Communist Party and leader Xi Jinping of human rights abuses.

There are numerous examples of China buying access to American universities. The Chinese government has given millions of dollars to hundreds of U.S. schools to host Confucius Institutes, which Beijing allegedly uses to push pro-regime propaganda. The Department of Education has investigated several universities that received donations from Chinese tech firms such as Huawei and ZTE. And Chinese military-linked entities funneled $88 million to American schools over a six-year period, according to a Washington Free Beacon analysis.

The Washington Free Beacon reported that the founder of a Communist Party-linked think tank, the China-U.S. Exchange Foundation, is a major funder of the Princeton center. The Ma Huateng Foundation also funded a study by Princeton researchers last year on cybersecurity.

The foundation gave $5 million to MIT on June 11, 2018, according to Department of Education records. It is unclear how MIT used the money, but Tencent in 2019 formed a partnership with the MIT Media Lab to develop computer coding skills for children. Chinese state-run media outlet Global Times reported that the endeavor echoed Beijing’s plan to expand AI education to meet future demand for tech talent.

While Ma’s donations are listed in a Department of Education database, the schools have not publicized the gifts, which have not been previously reported. Princeton mentions the donations from the Ma Huateng Foundation in the center’s annual reports and on one of its web pages, but Ma’s affiliation with Tencent is not disclosed. Ma is more popularly known as “Pony Ma,” making the link to Tencent more difficult to decipher. MIT has not publicized the donation from the foundation.

It is unclear whether Ma has also given money to Yale and Cornell. Both universities have disclosed dozens of anonymous donations from China over the years to the Department of Education. Schools are required to disclose foreign gifts of over $250,000, but the U.S. government only loosely enforced the law until last year. The Department of Education opened investigations in 2019 and 2020 into whether Yale, Cornell, Harvard, and other prestigious schools failed to disclose donations from China, Russia, Saudi Arabia, and Qatar. The department asked Yale and Cornell to disclose records of any donations from Huawei and ZTE, two other Chinese tech firms with close ties to the government.

Ma, who is China’s richest man, joined the advisory board of the Yale Center Beijing in 2015 and the Cornell China Center in 2016. Both schools have held recruitment and tech events with Ma and Tencent.

In November 2017, Ma spoke at an event for Cornell’s technology school about the future of AI. The Cornell Center and Tencent hosted a “Tencent Open Day for Cornell” at the company’s Beijing headquarters on May 27. Cornell said the event was “a career exploration opportunity for students to learn and experience corporate culture, understand corporate development and talents needs, and talk with Cornell alumni working in a variety of Tencent departments.”

The Yale Beijing Center has hosted Ma twice and held events where Tencent executives and Chinese government officials discussed the future of AI. Ma and Ted Snyder, the dean of Yale’s School of Management, met in 2017 and 2018 to discuss “future opportunities for collaboration,” according to the school’s annual reports. In March 2018, Yale hosted an event with officials from Tencent Research Institute and China’s Development Research Center of the State Council entitled “Artificial Intelligence Developments and Policy in the United States and China.”

A year earlier, the State Council, the highest administrative body in the Chinese government, released its national AI plan, which called for the development of “high-end AI talent.” The State Council plan called for the development of technology for use in the civilian and military sectors and a “highly efficient new pattern of civil-military integration.” It also encouraged “domestic innovative talents and the teams to strengthen cooperation with the world’s top AI research institutions.” In 2017, the Chinese government designated Tencent and four other tech companies as “AI national champions” tasked with fulfilling the country’s AI goals.

China’s plan to dominate AI will require hundreds of thousands of tech workers, according to the State Council. The need for so much manpower means China has had to recruit from abroad. While the United States also recruits tech workers from foreign countries, including China, the FBI has warned that the Chinese government uses a talent recruitment initiative, the “Thousand Talents” plan, to covertly steal technology from Western companies and universities. Beijing has increasingly targeted American schools as ripe grounds for recruitment. FBI director Christopher Wray warned of China’s increased use of “nontraditional collectors [of intelligence], especially in the academic setting.”

While Tencent has not been accused of exploiting American schools, the company has employed a “Thousand Talents” expert at its AI Lab. Tencent in 2016 hired renowned AI researcher Tong Zhang to lead its lab. Zhang is also an expert in the “Thousand Talents” initiative.

None of the schools who have received money from Ma responded to requests for comment. Tencent also did not respond to a request for comment.