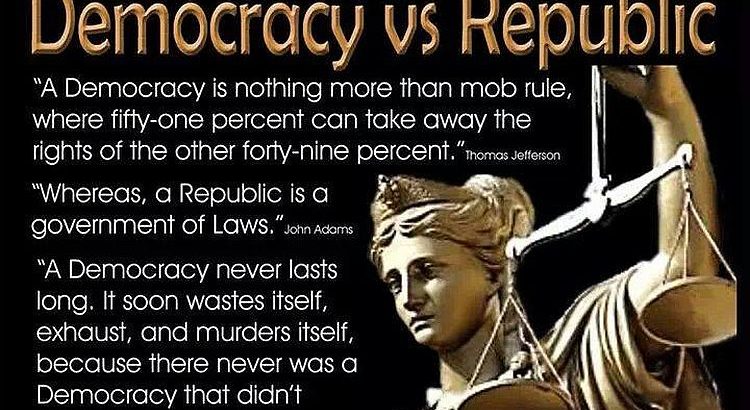 How many people did it take to make Joe Biden’s speech on September 1st look
like the devil himself giving a sermon or perhaps Hitler giving a speech? A cast
of thousands perhaps? But, hey, they made it clear. The kid gloves are off.
We’ve had some warnings. The ridiculous raid on Mar-a-Lago, the SWAT team
invasion of Marjorie Taylor Green’s home, the January 6 unconstitutional
political imprisonments were all intended to frighten us. Last night’s speech was
an escalation. It reeked of, “Sit down, shut up, and do as you’re told, or the
power of the U.S. government will be slammed against you.”

We’re red-blooded Americans. We know we are not a democracy. Nor do we
want to be. We are a representative republic, and we celebrate it. A democracy
is two wolves and a lamb voting on the lunch menu. It is mob rule, and we
denounce mob rule. Our republic is designed to protect the rights of all kinds of
minorities, and I’m talking about much more than skin color here. Skin color is
included, but so is level of wealth, a variety of political and religious beliefs, and
all kinds of other things like the population saturation of the area of the country
in which you live. For example, the Electoral College is designed to prevent “fly
over country” from being dominated by the residents of large cities.

Speaking of dominating, a small minority of the “ruling elite” (Yeah, right!) think
they can dominate and cower the masses of Americans who want us to pay
attention to making our country great again by instituting policies that take care
of America’s best interests first and create opportunity and restore freedom to
our people (and thus set an example for the world once more). No sale! I don’t
buy it, do you?

We know what we’re dealing with. Old Joe tried to transfer the characteristics of
the globalist/administrative state/fraudulently elected government onto us, but
the shoe doesn’t fit. We know who is intolerant of any contrarian idea. We
know who tries to control people against their will. We know who lies and
cheats and has perverted our “law” enforcement agencies and agencies that are
supposed to administer “justice” into tools for the opposite purpose. In addition,
in his speech from the devil, old Joe clearly tried to make us so angry that we
resort to violence. That would play straight into their hands, and give them an
excuse to come after us with a vengeance. Let’s outsmart them.

Fast. That can happen if we the people can elect a U.S. House and Senate full
of America First, MAGA Patriots! Nobody can do that for us. That’s got to be
job one!

What will we face? I don’t know for sure, but I can guess, can’t you?

They’ll continue to trump up charges against President Trump, but we’ll all know
that none of it is true.

They’ll continue to have local SWAT teams descend on the homes of well-
known MAGA Patriots. Steve Bannon got the treatment again the night of
old Joe’s speech from Hell. Steve just said, “Bring it! You’re NOT going to
intimidate me!” (Yeah, let’s hear it for Steve Bannon! You go, MAGA Patriot!)

Our attempts to ensure honest elections will be stonewalled. Many of us who
attended Mike Lindell’s “Moment of Truth Summit” either in person or via live
stream on Lindell TV are already experiencing it. A loosely formed group of us
in North Carolina are trying to get the Cast Vote Records from the 2020 election
before the records are destroyed. People from at least 7 North Carolina
counties have been denied access, and in every case I know about, the same
paragraph in the NC Statutes has been quoted. Instructions have come from
the NC Board of Elections legal department to the Directors of Elections in the
counties directing them as to the wording to use in their denials. I believe they
are willfully misinterpreting the law. We’re trying to find an attorney to file a
lawsuit and request an emergency injunction to preserve the records until the
truth can be sorted out.

There are similar groups all around the country. Find one and get to work if
you’re not already working. The Republican Party is another resource. They
are recruiting poll workers and poll observers to work INSIDE the polling area
during voting, and they typically do the training needed to know what you can
and cannot do if you see hanky-panky going on — and how to recognize said
hanky-panky. (No, “hanky-panky” is not an official term, but maybe it should
be.)

I think there will be attempts to use fear to control us and to shut down, or alter
the rules of the election. For example, they might “mandate” the new (never
tested on a human being I’m told) “vaccine” in order to shop, work, or VOTE.
Gosh, and how many deaths were caused by the previous “vaccines?” How
many miscarriages? How many heart problems? Flex your “NO” muscles,
Patriots! We’re going to need them! Watch carefully; we need to figure out how
to head this off at the pass.

Remember this; keep on keeping on. Steel your spine. Buckle up your resolve.
Stay calm. Support our fellow, Patriots. Refuse to quit. Refuse to cave to
threats, or to one of those 87,000 new IRS agents. Well, yeah, they’ll be sent
“to straighten us out” if we don’t get those MAGA folks in Congress. Life as we
know it will be OVER if we don’t win this one. Failure is not an option.

I’d be happy to hear your thoughts at raynor@cctaxpayers.com.