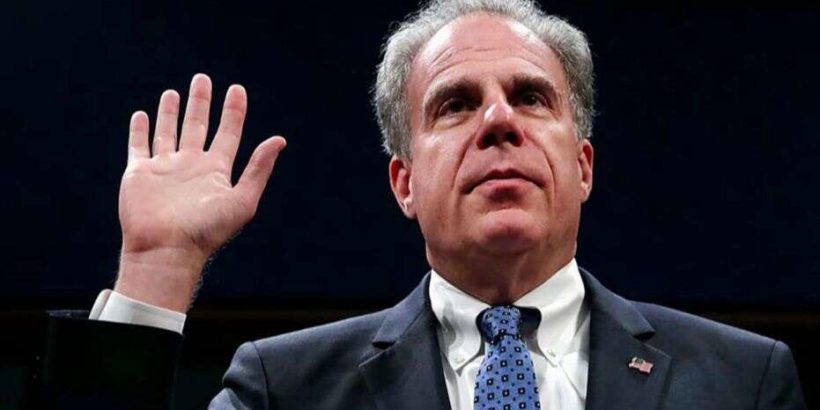 The lawyer, who has been identified as Kevin Clinesmith in media reports, had been incorrectly portrayed by many members of the media as a “low-level” or junior member of the FBI’s legal team.

Text messages obtained by Horowitz, covered in a June 2018 report, showed that Clinesmith had a strong bias against Trump, texting “Viva le resistance,” following Trump’s election as well as: “my god damned name is all over the legal documents investigating his staff.”

Clinesmith worked on both the Hillary Clinton email probe and the Trump-Russia investigation. He would also later become a member of special counsel Robert Mueller’s team and was one of the FBI officials—along with FBI agent Peter Strzok—who was removed by Mueller after Horowitz discovered FBI text messages expressing political bias against Trump.

The New York Times reported on Nov. 22 that Clinesmith was removed from the special counsel’s Russia investigation in February 2018 and resigned from the FBI “about two months ago.”

Clinesmith has reportedly been referred for criminal prosecution by Horowitz for altering “an email that officials used to prepare to seek court approval to renew the wiretap”—also known as the FISA (Foreign Intelligence Surveillance Act) renewal—on Page, the NY Times reported.

The Department of Justice (DOJ) obtained an initial FISA warrant on Page on Oct. 21, 2016, along with three subsequent renewals, with the final FISA warrant expiring in September 2017.

According to the NY Times article, the “paperwork associated with the renewal applications contained information that should have been left out, and vice versa.” Clinesmith reportedly altered an email that “was a factor during the wiretap renewal process.”

Clinesmith allegedly “took an email from an official at another federal agency that contained several factual assertions, then added material to the bottom that looked like another assertion from the email’s author, when it was instead his own understanding.”

This altered email was then included in a package that was prepared for another FBI official to read in “preparation for signing an affidavit” to be submitted to the FISA court “attesting to the facts and analysis” in the application.

The IG’s findings regarding Clinesmith’s email alteration have reportedly been sent to John H. Durham, the federal prosecutor assigned by Attorney General William Barr to examine the origins of the FBI’s Trump-Russia investigation. The finding may have formed a partial basis for the elevation of Durham’s investigation to a criminal investigation from an administrative review.

The NY Times noted that the specific “details of the email are apparently classified” and may not be made public even when the Inspector General releases his report on Dec. 9.

Clinesmith was described as “FBI Attorney 2” in the June 2018 IG report titled: “A Review of Various Actions by the Federal Bureau of Investigation and Department of Justice in Advance of the 2016 Election.”

But Clinesmith played a far more critical role in the FBI’s counterintelligence investigation of the Trump campaign. Clinesmith was cited in the IG report as being “the primary FBI attorney assigned to that investigation beginning in early 2017.” As noted previously, Clinesmith then transitioned to the special counsel investigation until his removal by Mueller upon the discovery of certain instant messages by Horowitz.

Clinesmith was cited in the 2018 IG report for sending politically driven messages and had an entire section, named FBI Attorney 2 Instant Messages, devoted to his actions and text messages.

One example of Clinesmith’s messages showing bias was sent on Oct. 28, 2016, immediately following a letter sent by then-FBI Director James Comey to Congress, in which he notified them of the reopening of the agency’s investigation into the Clinton Midyear Exam:

He also wrote the following:

“I just can’t imagine the systematic disassembly of the progress we made over the last 8 years. ACA is gone. Who knows if the rhetoric about deporting people, walls, and crap is true. I honestly feel like there is going to be a lot more gun issues, too, the crazies won finally. This is the tea party on steroids. And the GOP is going to be lost, they have to deal with an incumbent in 4 years. We have to fight this again. Also Pence is stupid.”

On Nov. 9, 2016, the day after the election, and following Hillary Clinton’s unexpected loss, Clinesmith sent an instant message to Sally Moyer, a unit chief at the Office of General Counsel, who was also known as Attorney 1 in the IG report, that read: “I am so stressed about what I could have done differently.”

Clinesmith’s messages cited in the 2018 IG report also included a notable concern and admission, “Plus, my god damned name is all over the legal documents investigating his staff.”

The term, “his staff” appears to relate directly to the individuals employed by Trump.

On Nov. 22, 2016, Clinesmith sent another instant message to Moyer, “commenting on the amount of money the subject of an FBI investigation had been paid while working on the Trump campaign.”

Moyer responded, “Is it making you rethink your commitment to the Trump administration?”

Clinesmith replied, “Hell no,” and then added, “Viva le resistance.”

Besides attempting to portray Clinesmith as a low-level FBI employee who had little or no bearing on the actual decision-making process, there has also been speculation that Clinesmith’s document alterations may have been limited to underlying Woods documents.

Woods files, which provide facts supporting allegations made in a FISA application, are attached to every application and are provided by the originating FBI agent in each case.

A FISA warrant allows for some of the most invasive methods of spying on an American citizen and must receive formal approval from the Foreign Intelligence Surveillance Court (FISC), which requires that there be probable cause to believe the proposed target is a foreign power or an agent of a foreign power.

When asked by Congress in an Oct. 3, 2018, testimony about the FISA process, James Baker, who was the highest-ranking FBI lawyer at the time of the Carter Page application, described a FISA warrant as allowing for “a set of highly intrusive surveillance techniques” that are used “to provide the FBI with foreign intelligence information.”

During his testimony, Baker was asked about why the FBI failed to disclose the political motivations of Christopher Steele, who was paid, through Fusion GPS, by the Clinton campaign to produce a dossier on Trump. The dossier, which consists of a number of memos written by Steele, was extensively used by the FBI in the Page FISA application.

Baker testified that this fact should have been vetted during lower levels of preparation.

“So the people filing the FISA application and the people who checked the Woods file to verify that the way this works is that they would not have had any information that was derogatory about Source #1 at the time that this was submitted,” Baker said.

“That there might exist in the files of the FBI or in somebody’s memory some interaction that might be derogatory and that it didn’t make it into the files, I don’t know that that happened or didn’t happen. That kind of thing in theory, in theory could happen. So, but the people responsible for this FISA should have believed that that was accurate at the time and should have had documentation to support that assertion.”

However, as previously reported in an earlier Epoch Times article, Moyer (listed as Attorney 1 in the IG report) told lawmakers that only the originating agent and the supervisory special agent in the field actually look at the Woods file during the preparation of a FISA application:

Somers: “Did you review the Woods’ file in the Carter Page application?”

Moyer told investigators that “the person that’s signing the application is relying on the individuals who have signed the Woods form that they have the Woods file.” These individuals would be the case agent and the supervisory special agent in the field.

Somers: “Okay. So beyond the case agent, who looks at a Woods’ file?”

Moyer: “The supervisory special agent in the field.”

Somers: “In the field. But no one else out of the field of that chain looks at a Woods’ file in general?”

Moyer: “That is correct, except both of those individuals sign the Woods’ form indicating that the facts are true and accurate and that they have documents to support those facts.”

Moyer stipulated that in some cases, the supervisory special agent at FBI headquarters who is signing off on an application might choose to review the Woods file, but that it was not done for the Page FISA.

Somers: “Do you know if that happened in the case of Carter Page?”

In other words, Moyer’s testimony shows that besides the case agent and the field agent, no-one—including Clinesmith—even looked at the Woods files. Furthermore, the change to the email by Clinesmith was reported to be of significance to the FISA renewal.

As stated above, the “email Mr. Clinesmith handled was a factor during the wiretap renewal process,” the NY Times reported.

It isn’t yet known which FISA renewal was affected by the alleged email alteration of Clinesmith, or if he did so at anyone’s direction. The inspector general’s report of FISA abuse, currently scheduled to be released Dec. 9, is expected to shed more light on this matter.