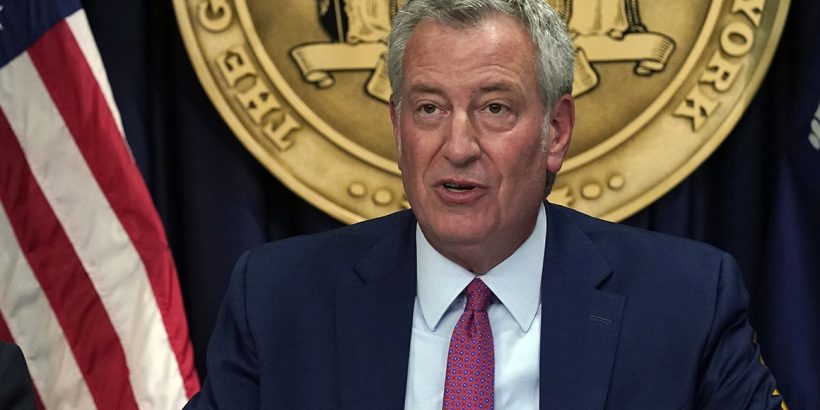 After eight years in office, New York City Mayor Bill de Blasio has finally given the public something to celebrate. He’s leaving.

New York has had weird mayors and incompetent mayors, but de Blasio has paired the two in a particularly charmless way.

He is oblivious to the level of vitriol directed toward him. The lowest he ever deigned to get consistently near everyday New Yorkers was the two hours he spent at his Park Slope YMCA, a 12-mile jaunt from the mayor’s Upper East Side Gracie Mansion residence. There he would ride a recumbent bike and ignore the plebes who dared approach him to ask about his monumentally terrible policy to deal with the city’s persistent and ever-growing homeless problem.

In a cringeworthy 2018 exchange, Hizzoner was confronted while stretching on a gym mat by a homeless activist, Nathylin Flowers Adesegun, who asked: “Out of 300,000 units in your affordable housing program, only 5% will go to the homeless: Can you look me in the eye and tell me why?”

He could not. Before the pandemic hit, the homeless shelter population was up 17% during his tenure. The single-adult shelter population remains up more than 60%. According to Crain’s New York Business, “Spending on shelters doubled between 2014 and 2018, but a record number of New Yorkers — 60,000 — were homeless by mid-2021.”

So much for that 2019 promise to get all of the city’s homeless off the streets and out of the subways in the next five years. De Blasio remained fixated on what he called a “right to shelter” and relied on New York’s harsh winters to force the homeless elsewhere.

But he had a cure for the black eye he was giving the city: just cut quality-of-life policing so on paper it looked as though crime was falling as the city was becoming less dystopian.

In June 2017, a new law allowed officers in the New York Police Department to issue civil summonses instead of criminal sanctions for quality-of-life offenses such as urinating or drinking alcohol in the streets. The direct and immediate result was that by October, officers had given just 4,370 criminal sanctions compared with the more than 55,000 during the same period the year before. It solved nothing, but people couldn’t complain about the lack of public restrooms if de Blasio turned all of Manhattan into one.

Disorder goes hand in hand with a struggling economy, and de Blasio’s tenure demonstrated it. His insistence that the city would simply bounce back on its own, because it had before, was the perfect indication that he just assumed things run themselves. Perhaps that was why, as former aides told the New York Post, de Blasio would come back from the gym to treat himself to a midmorning workday nap.

By the fall of 2020, business leaders had to spell it out for him. Executives at finance houses, real estate firms, and businesses such as JetBlue and Pfizer wrote a letter to de Blasio warning of “widespread anxiety over public safety, cleanliness and other quality of life issues that are contributing to deteriorating conditions in commercial districts and neighborhoods across the five boroughs.” The business leaders implored the mayor to “send a strong, consistent message that our employees, customers, clients and visitors will be coming back to a safe and healthy work environment. People will be slow to return unless their concerns about security and the livability of our communities are addressed quickly and with respect and fairness for our city’s diverse populations.”

It’s easy to see what worried them. More than a year after that letter was written, the city’s unemployment rate was nearly double the national average as New York struggled to regain lost jobs. Meanwhile, de Blasio had presided over a 37% rise in murders through 2020.

Failure combined with de Blasio’s weirdness during eight long years in office have made a humiliating spectacle of the Big Apple.

It is difficult to remember a mayoralty so obsessed with animals. De Blasio killed a groundhog in 2014 and tried to put carriage horses out of work. He wanted to kill a deer in Harlem, but it ended up dying of stress while he feuded with ex-Gov. Andrew Cuomo. And who could forget his $32 million quest to reduce the city’s rat population?

Trying to get horse-drawn carriages off the streets was a naked attempt to appease a campaign donor. When he fatally fumbled and dropped the groundhog, he was trying to play statesman on Groundhog Day. The deer was deemed by de Blasio a health menace when it migrated from a park to a nearby housing project, the punishment for which is execution. The rat request was Hizzoner’s empty gesture at cleaning up the city, leading to a psychotic video of de Blasio grinning wildly as he watched a team of city workers gas a rodent colony in Bushwick, declaring he wanted “to make the greatest city on Earth the worst place in the world to be a rat.”

Everything he tried was an abject failure. Reported rat sightings increased year over year by 6,000 through November. The city hit a 15-year high in cases of leptospirosis, an ailment likely spread by rat urine.

De Blasio’s reaction to his repeated face-planting was to assume he was destined for greater things and announce his run for president. He made his impassioned pitch to the 15 Iowa voters who showed up at his event in August 2019. The following month, a poll of presidential candidates found the mayor getting zero percent in his own city.

In announcing his withdrawal from the presidential race in September 2019, de Blasio said: “I feel like I’ve contributed all I can to this primary election.” Given that he contributed nothing, his words were technically true.

Now, hilariously, there’s talk that he’s considering a run for New York governor in 2022. He said his New Yorkers for a Fair Future committee “is a vehicle that I’ll be using to get the message out about things we need to do differently in New York City and New York state.”

If — sorry, when — his gubernatorial ambitions burn up on the launchpad, perhaps de Blasio can fall back to a career as a pitchman. Look no further than his hamburger salesman gimmick to urge New Yorkers to get a COVID-19 vaccine. In May, in a morning news briefing in front of the press corps, de Blasio touted the city’s vaccination incentives, one of them being a Shake Shack gift card, by munching on a burger and saying, “I want you to look at this and think about — again some people love hamburgers, some don’t, I really want to respect all ways of life — but if this is appealing to you, just think of this when you think of vaccination.” And through a mouthful of burger, he added: “Mmmm, vaccination. I’m getting a very good feeling about vaccination right at this moment.”

2022 brings a reset at City Hall. Goodbye, Bill de Blasio, a memorable mayor in all the wrong ways.

Elisha Maldonado is on the editorial board of the New York Post and a senior fellow with the Independent Women’s Forum.