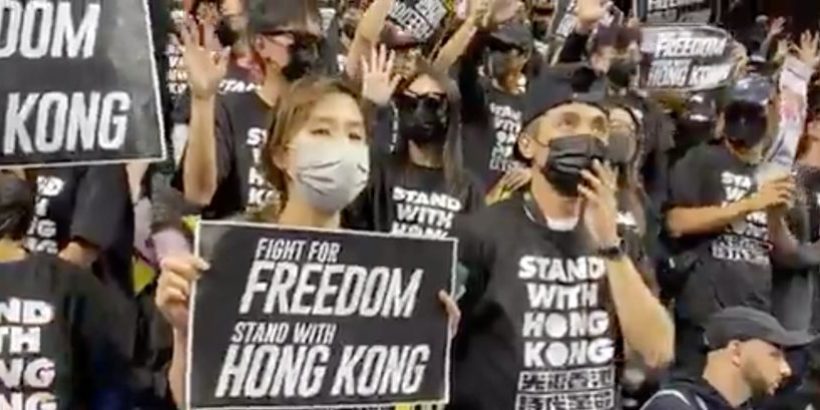 An estimated 10,000 Hong Kong medical workers and activists filled the bustling financial center on Oct. 26 for a peaceful evening rally as the anti-government protests entered the 21st weekend.

“Hongkongers, resist!” They shouted as the organizer, Michael Lau, concluded a speech at the packed Chater Garden in the evening. Lau accused police of inflicting unnecessary injuries and harassing hospital staff who tried to treat injured protesters.

What began as public outrage in June against a now-withdrawn extradition bill has since grown into calls for greater freedom in the city and opposition against the long arms of Chinese regime control.

Police have escalated their aggression toward protesters as the unrelenting movement continued, attacking them with tear gas, water cannons, rubber bullets, and occasional live rounds. Thousands have been arrested for their activism. A newly-installed anti-mask law also prohibits anyone from wearing facial coverings during public gatherings, in an attempt to deter demonstrators.

The evening rally, which was authorized to go on from 6:00 p.m. to 9:00 p.m., saw many activists from all walks of life relaying their experiences of police mistreatment.

A man who did not give his name said that the police arbitrarily arrested him while he was walking on a pedestrian road. “The police struck me down to the ground without caring about whether I could breathe. I didn’t even know what crime I committed,” he told the rally participants. “Since then every time going home I have the fear that someone would come from behind and run me down.”

He said that the pepper spray from the police burned the skin on his chest. The police also hit him on his left leg four times, after which he walked with a limp for a week, he said.

The man also recounted police abuse while in detention, including being stripped naked at the police station and denied access to lawyers or medical treatment.

“When I experienced such humiliation, I still told myself I did nothing wrong,” he said. “You can abuse my body, but you can’t break my will.”

The rally attendees, many with their masks on in defiance of the new ban, also held up American flags and banners condemning the police force.

Around 22 percent of protesters who were treated had bone injuries, according to the data released at the rally. The medical personnel present said that they were pained to see the injured civilians and protesters opting for underground medical help or even no treatment at all, owing to fears that they could be arrested for seeing doctors. They noted that regular patients at the hospital also refused to wear masks due to the mask ban, which could lead to a spike in seasonal flu cases.

The rally organizers also showcased an array of close-ups of protester injuries, including swollen eyes and dislocated hands.

Paul Au Yiu-kai, a surgeon with Doctors Without Borders, told The Epoch Times in a recent interview that as many as 90 percent of the injured protesters are likely not seeking the hospital treatment they need, which would reveal their identities. Yiu-kai is currently in Hong Kong to provide humanitarian aid.

“Our Hong Kong really is sick today,” a 10-year-old who was arrested during an Oct. 6 protest said during a speech. About 10 hours following his arrest, his head swelled up so much that he was sent to the hospital, he said. He also expressed gratitude to the medical professionals who treated him, “without whom he would not have made it home in whole.”

“I never thought that even medical workers would one day stand up and fight,” said Wong Lok Yu, an emergency physician at the Queen Elizabeth Hospital. “All Hongkongers wanted to be peaceful and rational at the very beginning, but when more and more facts come into view … we need to protect ourselves.”

Around 300 Christians joined for a prayer meeting at Chater Garden earlier in the day to express the hope that the people in power would heed public opinion. They also prayed for the best for the young people, who have been at the forefront of the ongoing pro-democracy movement.

The Hong Kong Bureau of The Epoch Times contributed to this report.