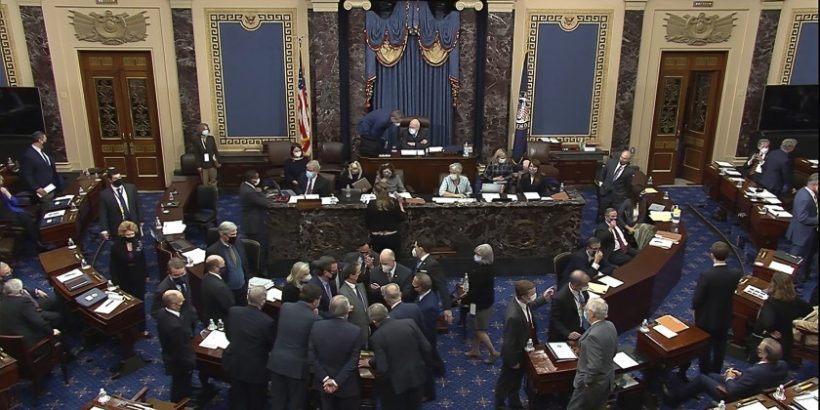 For Democrats, their impeachment and trial of President Trump is a bust.

All their their pious — “democracy is an extremely rare and fragile and precarious and transitory thing” flapdoodle — and hopes for a grande finale Getting Trump … isn’t drawing an audience. It’s a dud. A re-run. And almost nobody’s watching.

Voice of America, citing Nielsen, noted how bad it was, citing the House-side 3-million viewer fiasco:

WASHINGTON – The U.S. Senate’s impeachment trial of President Donald Trump couldn’t have higher stakes, but as an historic two-week-long televised event, it has been something of a ratings bust.

The third impeachment trial in the history of the United States Senate hasn’t come close to toppling viewership records, according to the Nielsen rating agency.

So far, the live coverage of President Trump’s Senate impeachment hearings has garnered fewer television viewers than the audiences that tuned in to see other historic congressional hearings, including appearances by James Comey, Brett Kavanaugh, Michael Cohen and Robert Mueller.

The Senate trial isn’t much better. Day one drew 12 million viewers, with the bulk concentrated on left-wing CNN and MSNBC. Fox News roped in just 1.4 million.

These guys? 12 million at best. For sure it’s a bust. Even Joe Biden is trying to distance himself from this bloviating crap, claiming: “I have a job.”

The lack of public interest is a bad sign for Democrats, who against all common sense as a new administration comes in, wanted this as their apex moment.

One expert, cited by Voice of America, said it was likely because the public already knew the outcome it.

Which is true enough. But it’s like the sheer dishonesty displayed is a turn-off, too. Members of the public have told the press it’s coming off as a Democrat informercial.

Who the hell would want to watch a trial, with, for-starters, a judge-and-jury combo presided over by Rep. Tim Leahy? This guy, whose nickname is “the nastiest Democrat” is a judge who can be impartial? The only reason he’s there is because Democrats couldn’t get a real judge, Supreme Court Chief Justice John Roberts for a second run at the gavel and podium. Roberts wanted no part of this.

But the substance of the trial itself is showing dishonesty, too, amazing dishonesty, really, from people supposedly sworn to tell ‘the truth, the whole truth, and nothing but the truth’ and forget about the ‘God’ part. Democrats are the party that boos God.

Some have compared it to a Democrat infomercial.

Look at how many factual issues have come to the fore, to start:

Number one, the deceptively edited video, where Trump’s words to his crowd were that they demonstrate peacefully. That part was cut out, just as is done in a sleazy campaign ad. Who the heck wants to watch a trial with that?

Two, the lies so bad they had to be struck from the record.

Democrats made up out of thin air a supporting argument that President Trump had tried to persuade a senator to delay the electoral process. According to Fox News:

Sen. Mike Lee, R-Utah, succeeded Wednesday in having a Democrat’s statements about him withdrawn from the record during the second day of former President Trump’s Senate impeachment trial.

Lee objected to claims from Rep. David Cicilline, D-R.I., that Lee said former President Donald Trump was trying to convince Sen. Tommy Tuberville, R-Ala., to delay the certification of the presidential election on Jan. 6 as a pro-Trump mob stormed the Capitol. Lee previously said that Trump called him asking for Tuberville and that he handed his phone to Tuberville for a conversation with the former president. But Lee has not said what the conversation between Trump and Tuberville was about.

“They are contrary to fact,” Lee said, disputing Cicilline’s remarks, during the trial. “I am the only witness.”

“Tonight the House impeachment managers made false statements mischaracterizing Sen. Lee’s account of a phone conversation between President Trump and Senator Tuberville,” a Lee spokesman told Fox News. “Sen. Lee objected and asked that the false statements be stricken from the record. The House managers agreed to withdraw those statements.”

The whole thing is disgusting. And it’s far from an anomaly, here’s another one, from John Solomon’s JustTheNews:

The author of a tweet introduced by Democrats at the Senate impeachment trial said Thursday her statement “we are bringing the Calvary” was a clear reference to a prayer vigil organized by churchgoers supporting Trump and not a call for military-like violence at the Capitol riot as portrayed by Rep. Eric Swalwell.

Jennifer Lynn Lawrence also said she believes the California Democrat and House impeachment manager falsified her tweet, adding a blue check mark to the version he introduced at the trial suggesting she was a verified Twitter user with more clout when in fact her Twitter account never had a blue check and has never been verified.

“I noticed when they put my tweet on the screen that all of a sudden my tweet had a blue checkmark next to it,” she said during an interview on the John Solomon Reports podcast. “… This way, if he entered that into congressional testimony, it’s a verified account, and it has, it could be applicable in law. Secondly, he wanted to show that my Twitter account had more gravitas than it actually did. He wanted to show that the president was trying to use me to bring in the cavalry.”

Just makin’ it up about Trump and his supporters, once again.

This is low-grade lies, easily found out, and completely disgusting to see in a supposed trial of any sort. This is the kind of thing dirty political operatives pull on their opposition. Free? Fair? Not at this trial.

Another issue is witnesses — some have claimed to the press that Trump himself incited them to riot, just as the impeachment charges claim. Such as him but there are others. It wouldn’t have anything to do with their calls to pardons from Trump went ignored, would it? Or more specifically, the fact that they are facing long jailtimes and willing to say anything to get out of it, now, would it? Somehow the press is incurious, oblivious, and credulous about them, but normal people can see the obvious motive.

Which must be at least one reason why, at this Roberts-less Senate trial, there also are to be no witnesses. If there were, supposedly supporting the Democrats’ dirty false claims, the GOP would be able to call in the FBI to testify about the pre-planning of some of the rioters, as Sen. Lindsey Graham noted. “opening a can of worms.” How could Trump incite a riot when the business started the day before? Democrats have begun moving the goal-posts, by claiming Trump incited riots all through his presidency now, which is rather expanding the scope of the claims. Yet for Democrats, the fear of real live witnesses is far stronger than the pleasure of bringing in desperate, jailtime-facing rioters and watching them point the finger at Trump.

Bottom line here is that this is one helluva low-grade trial. It’s not fair, it’s completely rigged, pretty much like the 2020 election, which Trump complained so bitterly about. It’s very likely to backfire, too, but for now, it ought to concentrate their hate-filled minds that voters are tuning them out, bored at their re-run, and not interested in listening to selectively edited, invented and presented rounds of spin and lies.

Photo illustration by Monica Showalter, with use of image by Tom Childers, via Flickr // CC BY-SA 2.0 and public domain image.