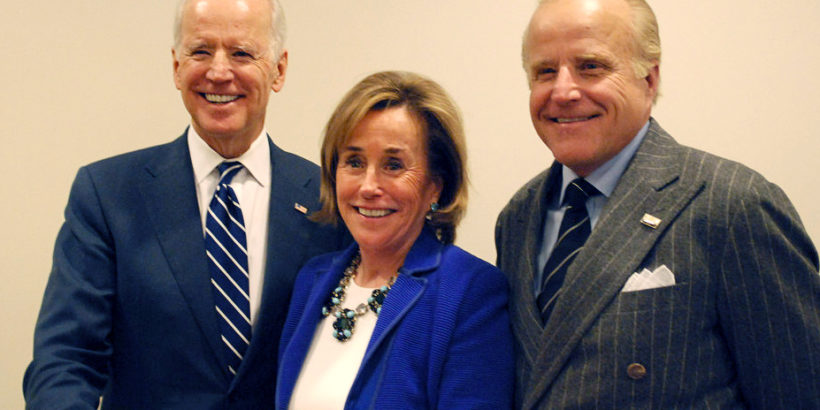 Valerie Biden Owens, the sister of former vice president Joe Biden (D), who served as the campaign manager for his past presidential campaigns, directed $2.5 million from “Citizens for Biden” and “Biden for President Inc.” to her own consulting firm during her brother’s 2008 presidential bid alone, Breitbart senior contributor and Government Accountability Institute (GAI) President Peter Schweizer’s investigative blockbuster Profiles in Corruption: Abuse of Power by America’s Progressive Elite reveals.

Biden’s political tenure, as Schweizer’s book extensively details, has largely remained a complicated family affair, resulting in little-known financial benefits for not just his son Hunter Biden, but for his sister Valerie.

Her role as a senior partner in the political messaging firm Slade White & Company coincided with her participation in Biden’s various political campaigns. She was only one of two executives – the other being Joe Slade White – at the firm and has remained the Executive Vice President for 15 years.

However, the lines between her role as leading her brother’s political campaigns and working at the firm blurred, as the firm “received large fees from the Biden campaigns that Valerie was running,” Profiles in Corruption reveals:

The firm received large fees from the Biden campaigns that Valerie was running. Two and a half million dollars in consulting fees flowed to her firm from Citizens for Biden and Biden For President Inc. during the 2008 presidential bid alone. Keep in mind that Joe Slade White & Company worked for Biden campaigns over eighteen years.

The report demonstrates a pattern, as Schweizer’s book shows, of the complex, albeit largely unknown, dynamics of the Biden family and the financial benefits reaped, which purportedly stem from the presidential hopeful’s varying positions in government throughout his life.

“These are not a few disparate enterprises, but rather moneymaking ventures that appear to be part of a well-organized family business,” Profiles in Corruption details.

Biden has previously denied, particularly on the campaign trail, the allegations that his family members have cashed out in various ways over the course of his political career.

“I’ve never discussed with my son or my brother, or anyone else anything having to do with their businesses, period,” Biden told reporters in August 2019 amid further allegations of his family members using his political leverage for personal gain.

“As we will see, this is an impossibility, “ Schweizer writes.

The latest revelation, detailing Valerie’s direction of millions of her brother’s campaign dollars to her consulting firm, follows the eye-opening discoveries detailed in Schweizer’s New York Times #1 bestseller Secret Empires, which effectively “blew the lid off the Biden-Burisma scandal in Ukraine, wherein Hunter Biden made up to $83,000 a month with Ukrainian energy giant Burisma as his father led U.S.-Ukraine policy while vice president,” as Breitbart News detailed.

Profiles in Corruption also exposes “the Biden 5,” detailing how Hunter Biden’s firms scored business deals with figures and entities tied to the governments of Russia, China, and Kazakhstan. It also reveals how Biden’s brothers seemingly benefited from his political stature. As Schweizer reveals, James Biden’s firm received $1.5 billion in government contracts despite a lack of experience in the international development industry. Profiles in Corruption also details Frank Biden’s connection to projects receiving millions in taxpayer loans over the course of the Obama administration.

Biden will continue to face mounting questions surrounding the benefits his family reaped as a result of his political influence as the Iowa caucuses kick off the Democrat primary election next week. While he is thought by some to be the Democrat party frontrunner, the RealClearPolitics average shows Sen. Bernie Sanders (I-VT) slowly closing the gap. The socialist Sanders has overtaken him in key early state polls over the last week.