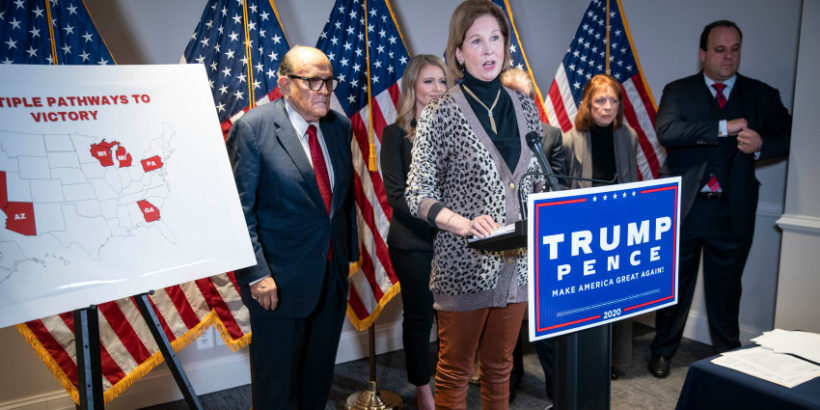 Lawyer Lin Wood announced he will represent fellow attorney Sidney Powell after voting machine manufacturer Smartmatic demanded that she retract statements alleging the company was involved in voter fraud during the Nov. 3 election.

“Knowing my background & experience in defamation law, Sidney [Powell] asked me to represent her & respond to SmartMatic litigation threat,” Wood wrote on Twitter. “Since everything Sidney is saying about election fraud is documented TRUTH, my response to SmartMatic was simple & to the point.”

Smartmatic previously sent out a letter demanding retractions from Newsmax, OAN, and Fox News, according to a statement. It appears that Fox News’ Lou Dobbs and Newsmax issued responses after the letters were sent.

Wood, who successfully defended a number of high-profile individuals in defamation lawsuits, posted an email response to J. Erik Connolly with Benesch, Friedlander, Coplan & Aronoff LLP, the firm representing Smartmatic. Wood also posted the letter the firm sent to Powell that had demanded the retraction.

In the letter, Wood wrote that he “carefully reviewed your letter on December 15, 2020. I am not impressed. Ms. Powell retracts nothing.”

“File your lawsuit,” he added. Wood’s message was re-tweeted by Powell on Sunday to her more than 1 million followers.

The letter (pdf) to Powell said she “engaged in a concerted disinformation campaign against Smartmatic” and “appeared on numerous news networks, including but not limited to, Fox News, Fox Business, and Newsmax, and told millions of viewers that Smartmatic was created under the direction of Hugo Chávez, that its software was designed to fix elections, and that Smartmatic conspired with others to defraud the American people and fix the 2020 U. S. election by changing, inflating, and deleting votes.”

It asked her to retract her comments, alleging that she engaged in defamation that impacted the company’s business. The letter suggests that Smartmatic, via its lawyers, will file a defamation lawsuit.

The firm added that its software and systems were only used in Los Angeles County during the Nov. 3 election, adding that it has no ties with Dominion Voting Systems.

“Its software was not used by any other company for the 2020 U.S. election, including Dominion. Dominion did not use Smartmatic’s software in any county where its voting technology was used in the 2020 U.S. election. Smartmatic has never provided Dominion with any software, hardware, or other technology. There are no ties between Smartmatic and Dominion, including ownership ties, software licensing, or business at all,” according to the letter.

Last week, Dominion also sent a letter to Powell and demanded a retraction. The firm has frequently denied that its machines can switch votes or that it has ties to foreign governments.