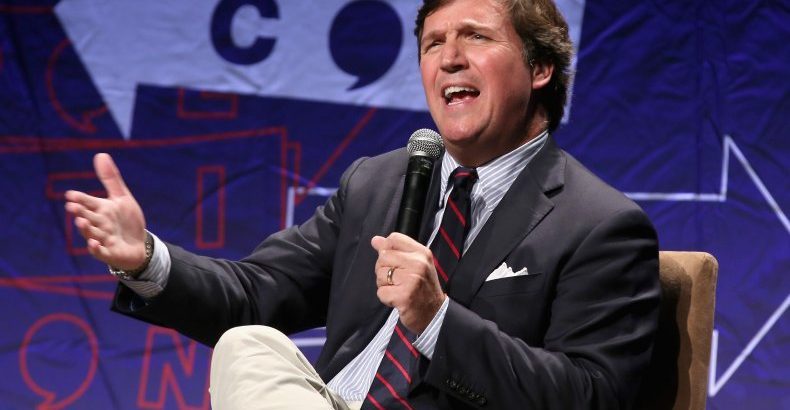 The U.S. Marines said they “messed up” after joining in attacks lobbed by military officials at Fox News’s Tucker Carlson.

The official Twitter account for the II Marine Expeditionary Force Information Group used a pejorative in responding to Carlson’s recent statements on how the military should be focused more on adversaries and less on culture issues.

The Marines shared a picture of a female soldier carrying a male one and tagged Carlson, writing that the photo showed “what it looks like in today’s armed forces.”

“Get right before you get left, boomer,” the account said, using a widely considered pejorative.

After intense pushback for using an official military account to attack a private citizen, the Marines group said: “We are human and we messed up. What was intended as a tweet in support of our female Marines and sisters serving in uniform was clearly not aligned with our standard practices or an appropriate representation of the Marine Corps. We will do better and serve the people.”

“We can do better and we will collectively take a knee, review our procedures and get back in the fight. Our focus is to train, fight and win and we have a hard time doing that without your support,” the Marines added in another tweet.

The Department of Defense’s inspector general didn’t immediately respond to a request for comment.

The situation was the latest development in an ongoing clash between Carlson and the military, with some of the force’s highest officials lambasting the Fox News host for his views.

Carlson on March 9 on his show played comments from President Joe Biden, who has made elevating women in the military a priority in recent weeks.

In remarks on International Women’s Day the day prior at the White House, Biden highlighted how he’d nominated two women for four-star command positions in the armed forces. The nominations will underscore to young women just beginning their careers in the military that “no door will be closed to them,” Biden said.

Military leaders realize “there’s much, much more work to be done to ensure that women’s leadership is recognized and we have more diverse leaders” and that “all women feel safe and respected in our military,” he continued, adding: “Some of it is relatively straightforward work where we’re making good progress designing body armor that fits women properly; tailoring combat uniforms for women; creating maternity flight suits; updating—updating requirements for their hairstyles.”

Carlson then told viewers: “So we’ve got new hairstyles and maternity flight suits. Pregnant women are going to fight our wars. It’s a mockery of the U.S. Military. While China’s military becomes more masculine as it’s assembled the world’s largest navy, our military needs to become, as Joe Biden says, more feminine, whatever feminine means anymore since men and women no longer exist. The bottom line is it’s out of control, and the Pentagon is going along with this.”

The segment drew criticism from John Kirby, the Department of Defense’s press secretary. He told reporters that “the diversity of our military is one of our greatest strengths.”

“We are better and more effective not only when we represent the American people—all the American people—but also, when we have the moral courage to include other perspectives and ideas into our decision-making; perspectives that, as the secretary himself noted Monday, are based on lived experience. It’s that experience, and the professionalism and commitment of our people, that has always been our decisive advantage,” he said, adding that one contributor to that advantage is the women who serve in the military but that the armed forces need to work on making the military more inclusive.

“We pledge to do better and we will. What we absolutely won’t do is take personnel advice from a talk show host or the Chinese military. Now maybe those folks feel like they have something to prove; that’s on them. We know we’re the greatest military in the world today, and even for all the things we need to improve, we know exactly why that’s so,” Kirby also said.

Defense Secretary Lloyd Austin “shares the revulsion of so many others to what Mr. Carlson said in his opening statement,” according to the press secretary.

In addition, the Space Force Command’s senior enlisted leader Marine Corps Master Gunnery Sgt. Scott Stalker, while wearing his uniform, said in a video that Carlson’s opinion is “based on zero days of service in the armed forces.” Army Sgt. Major Michael Grinston was among other officers criticizing Carlson.

Carlson on March 11 said the Pentagon had effectively “declare[d] war on a domestic news operation.”

He also amped up his critique of what he described as the military’s focus on identity politics, noting that Biden recently announced the Pentagon would pay for gender reassignment surgery for active duty personnel.

“Here’s a reminder: the US military exists to fight and win wars. That’s its only purpose. The U.S. military is not an NGO. It is not a vehicle for achieving ‘equity.’ It’s not a social experiment. It’s definitely not an employment agency. Nobody has a God given right to work in the military. No one does, and then includes all of us.”