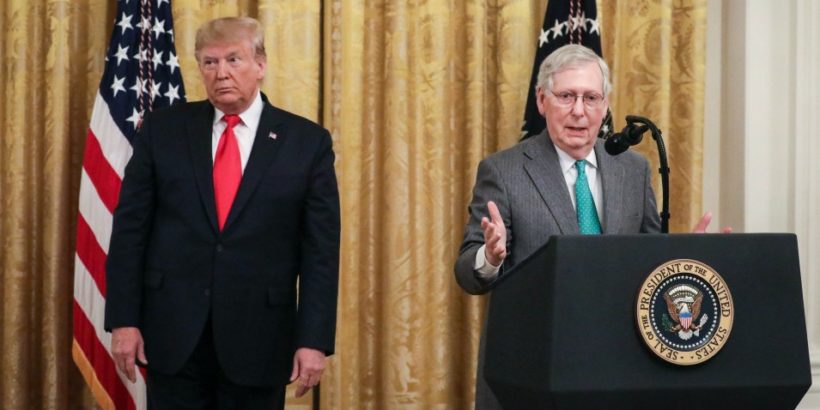 Senate Majority Leader Mitch McConnell (R-Ky.), who has offered few comments during the impeachment trial of President Donald Trump, said the two articles against the president fail to meet the lofty standard laid out by the framers of the Constitution.

Impeachment “cannot rest alone on the exercise of a constitutional power combined with concerns about whether the president’s motivations were public or personal and a disagreement over whether the exercise of the power was in the national interest,” McConnell said on the Senate floor after about two weeks of arguments from both Trump’s legal team and the House impeachment managers.

The Senate will hold a final vote on impeachment Wednesday, and barring any unforeseen developments, Trump is likely to be acquitted for abuse of power and obstruction of Congress, although Democrats will likely argue that the trial wasn’t legitimate after the Senate voted down calling additional witnesses and subpoenaing documents. The Senate requires a 67-vote supermajority to convict a president, which has never been done before in U.S. history, although former President Richard Nixon resigned before the House could hold a vote to impeach him in the early 1970s.

McConnell said the two articles were “absurd,” “dangerous,” and “constitutionally incoherent.” His comments were the first he’s delivered on the Senate floor since the event began last month, although media reports and GOP senators have said that he worked behind-the-scenes to keep his caucus together and vote along party lines.

The Republican from Kentucky then urged senators to reject both articles of impeachment.

“We must vote to reject the House abuse of power, vote to protect our institutions, vote to reject new precedents that would reduce the framers’ design to rubble,” McConnell said. “I urge every one of our colleagues to cast the vote … clearly required, vote to acquit the president of these charges,” McConnell added.

House impeachment managers, during their inquiry, rushed the process to try and politically harm Trump before Christmas 2019, he said, noting that in prior impeachments, it took House investigators sometimes years to come up with a case against a president.

He said Democrats view Trump as a proverbial “bull in the china shop … so [Democrats] are going to drive a bulldozer through the China shop to get rid of him.”

Senate Minority Leader Charles Schumer (D-N.Y.), speaking after McConnell, accused the GOP leader of being “afraid” of calling in new witnesses and documents during the trial.

“The idea that that means you shouldn’t have witnesses and documents when we’re doing something as august, as important as an impeachment trial fails the laugh test,” Schumer said on the floor. “It makes people believe, correctly in my judgment, that the administration, its top people and Senate Republicans are all hiding the truth.”

A day before that, House managers warned that Trump might abuse his power after being acquitted.

“When the history books are written about this tumultuous era, I want them to know I stood up to tyranny,” House manager Adam Schiff (D-Calif.) said on the floor. Schiff added, “It’s not too late for us to honor ours, to wield our power to defend our democracy.”

Trump is slated to give his annual State of the Union address to Congress today, where he might make mention of the impeachment case against him. He’s repeatedly said that he did nothing wrong in his dealings with Ukraine, while Democrats have said he withheld military aid to Kyiv to secure investigations into a potential political rival.

During an interview with Fox News’ Sean Hannity on Sunday, the president said he will “talk about the achievements that we’ve made,” namely the burgeoning U.S. economy.

On Wednesday, when the Senate votes on impeachment, it’s still not clear if there will be bipartisan consensus to acquit. Sen. Joe Manchin (D-W.Va.), whose state overwhelmingly voted for Trump in 2016, told the Senate that he’s still not sure whether he will convict the president, but suggested censuring Trump rather than impeaching him.