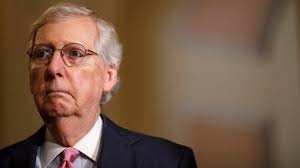 Senate Majority Leader Mitch McConnell (R-KY) has launched an ad on social media with a message that he will end the impeachment effort against President Donald Trump should the House pass Articles of Impeachment and send them to the upper chamber.

“Nancy Pelosi is in the clutches of a leftwing mob,” McConnell said in a fundraising video on his re-election campaign Facebook page. “They finally convinced her to impeach the president.”

“All of you know your Constitution,” McConnell said. “The way that impeachment stops is with a Senate majority with me as majority leader.”

This comes after McConnell said he would have to at least initiate an impeachment trail in the Senate, as the Constitution requires.

“It’s a Senate rule related to impeachment, it would take 67 votes to change, so I would have no choice but to take it up,” McConnell said in a recent interview on CNBC. “How long you’re on it is a whole different matter.”

But in the fundraising ad posted late last week on his campaign Facebook page McConnell made it clear his goal for the impeachment effort in the Senate is to stop it in its tracks.

McConnell is running for reelection next year and regularly plays up his ties to Trump, who easily carried y in 2016 and remains popular in the state,” AP said in its report on the ad. “McConnell campaign manager Kevin Golden said the impeachment inquiring has fired up the senator’s supporters.”

“Few issues energize conservative voters like liberal overreach and the Democrats’ latest outrageous attempt to impeach President Trump has activated our base to new heights,” Golden said in a statement issued on Saturday.