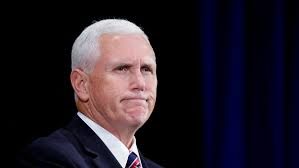 Vice President Mike Pence refused to cooperate with Democrats’ subpoena for documents related to a controversial call made by the president.

Pence sent a letter to a letter to House Democrats indicating that he questioned the legitimacy of their impeachment inquiry.

The letter asserted that “the purported ‘impeachment inquiry’ has been designed and implemented in a manner that calls into question your commitment to fundamental fairness and due process rights.”

Democrats have used the claims of a whistleblower about allegedly improper demands from President Donald Trump in a phone call to the Ukrainian president to bolster their impeachment inquiry.

“Instead of being accountable to the American people and casting a vote to authorize what all agree is a substantial constitutional step, you have instead attempted to avoid this fundamental requirement by invoking the Speaker’s announcement of an ‘official impeachment inquiry’ at a press conference,” the letter continued.

Democratic Rep. Ted Deutsch of Florida excoriated Pence for his refusal to comply.

“Vice President Mike Pence doesn’t think that Congress or the American people deserve to know if he was involved in the effort to ask Ukraine to interfere in our elections,” he tweeted.

“There is no privilege that allows anyone in the WH to cover up wrongdoing,” he concluded.

Earlier on Tuesday, House Speaker Nancy Pelosi (D-Calif.) announced that Democrats would not be taking a vote to authorize an impeachment inquiry.