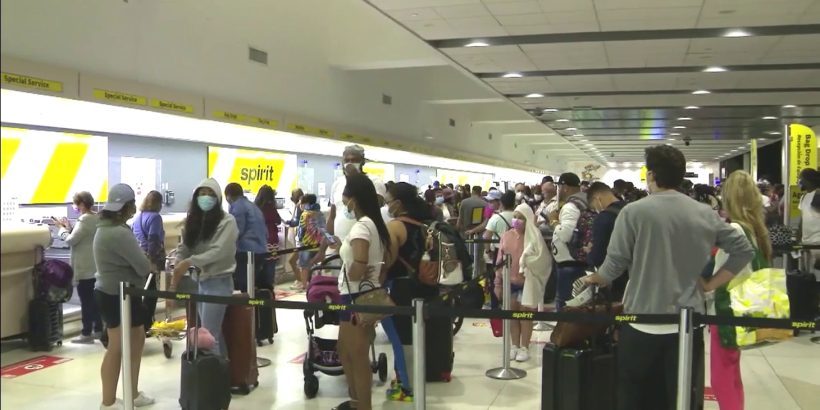 Multiple airlines across the United States canceled hundreds of flights on Christmas eve, citing a nationwide surge in Omicron cases which has directly impacted employees and flight crew.

The cancellations come as more than 109 million Americans are expected to travel 50 miles or more via airplanes and other forms of transportation to visit friends and family over the festive period.

That figure is an almost 34 percent increase from 2020, with 27.7 million more people traveling than last year, bringing the number of people traveling during the season to pre-pandemic levels, according to the American Automobile Association (AAA).

A spokesperson from United Airlines told ABC News that the nationwide spike in Omicron cases this week has directly impacted flight crew and employees.

“As a result, we’ve unfortunately had to cancel some flights and are notifying impacted customers in advance of them coming to the airport,” United said in a statement. “We’re sorry for the disruption and are working hard to rebook as many people as possible and get them on their way for the holidays,” the airline added.

“We are really managing this day by day,” Freed told the Times. “There may be some more flight cancellations for Saturday. It’s possible.”

Meanwhile, Delta Air Lines told ABC that it had canceled around 90 flights on Friday, just one day before Christmas.

The airline said in a statement that the “flight cancellations are due to a combination of issues, including but not limited to, potential inclement weather in some areas and the impact of the Omicron variant.”

“Delta teams have exhausted all options and resources—including rerouting and substitutions of aircraft and crews to cover scheduled flying—before canceling around 90 flights for Friday,” Delta said. “We apologize to our customers for the delay in their holiday travel plans. Delta people are working hard to get them to where they need to be as quickly and as safely as possible on the next available flight.”

Alaska Airlines also canceled nine flights on Friday, as per Flight Aware, although reasons for the flight cancellations are not immediately clear.

The Epoch Times has contacted United Airlines, Delta, and Alaska Airlines for comment.

American and Southwest Airlines told CBS DFW on Thursday that they do not plan to cancel any flights over the coming days due to COVID-19 staffing issues.

The cancellations come after the Centers for Disease Control and Prevention (CDC) said on Monday that the new Omicron COVID-19 variant now makes up at least 73 percent of new cases in the United States.

World Health Organization (WHO) chief Tedros Adhanom Ghebreyesus this week warned that holiday gatherings over Christmas could see a surge of COVID-19 cases, and urged people to cancel or delay planned events in light of the new Omicron variant.

Ghebreyesus told reporters on Monday there was now “consistent evidence” that Omicron is spreading faster than the Delta variant, and that it was more likely that people who have been vaccinated or recovered from COVID-19 could be infected or reinfected.

“There can be no doubt that increased social mixing over the holiday period in many countries will lead to increased cases, overwhelmed health systems, and more deaths,” he said during a briefing in Geneva.

The WHO chief said that, in some cases, this could mean “canceling or delaying events,” adding that “an event canceled is better than a life canceled.”

“It’s better to cancel now and celebrate later than to celebrate now and grieve later. None of us want to be here again in 12 months’ time,” Ghebreyesus said.