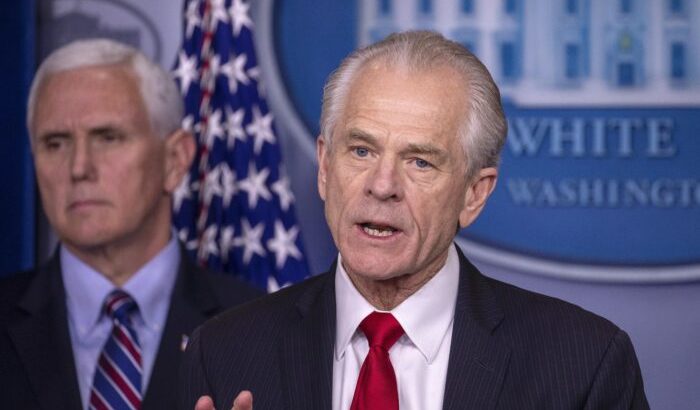 White House trade adviser Peter Navarro on Tuesday released the second volume of his report that documents what he believes is evidence of the Democratic Party’s extensive efforts to “steal” the election from President Donald Trump.

Navarro’s latest release, titled “Art of the Steal,” follows the Dec. 17 publication of volume one of the report, “The Immaculate Deception,” on alleged irregularities across key battleground states in the 2020 presidential election, which was praised by the president last month.

His sequel attempts to provide a “comprehensive, objective assessment of the fairness and integrity of the 2020 election,” and describes how Democrats took a “two-pronged” approach to effect Democratic presidential nominee Joe Biden’s “narrow and illegitimate ‘victory’” in the Nov. 3 election.

There “may very well have been a coordinated strategy to effectively stack the election deck against the Trump-Pence ticket,” Navarro’s report states.

Navarro argues that “the observed patterns of election irregularities are so consistent across the six battleground states they suggest a coordinated strategy to, if not steal the election outright, strategically game the election process in such a way as to ‘stuff the ballot box’ and unfairly tilt the playing field in favor of the Biden-Harris ticket.”

The report refers to the states of Arizona, Georgia, Michigan, Nevada, Pennsylvania, and Wisconsin.

The Democrats’ “strategy,” Navarro wrote, relied on the expansion of voter access to mail-in and absentee ballots and easing ballot verification protocols and other setbacks to voter registration.

“It is important to point out here that much of what the Democrats did was legal; but some of what they did at times also bent, and arguably sometimes broke, the rules or the law,” Navarro wrote.

“The practical result of the Democrat Party’s two-pronged Grand ‘Stuff the Ballot Box’ Strategy was to flood the six key battleground states with enough illegal absentee and mail-in ballots to turn a decisive Trump victory into a narrow alleged Biden ‘victory.’”

The report’s release came a day before Congress is set to convene in a joint session to count electoral votes.

The president has said that he will join a planned Jan. 6 Washington rally, which he has described as a “historic day.” He is set to give a speech at a “Save America Rally” on the Ellipse near the White House at 11 a.m.

Trump has for weeks has been urging his supporters to attend the event, which has an expected turnout of 1.5 million people.

“Volumes 1 and 2 of the Navarro Report—’The Immaculate Deception’ and ‘The Art of the Steal’—together make the strong case for a full investigation of the election irregularities and strategic gaming of our political process that in all likelihood have led to a stolen presidential election,” Navarro said.

“Any such investigation must begin immediately as this nation simply cannot risk the inauguration of a president who will be perceived by a large segment of the American people as illegitimate.”