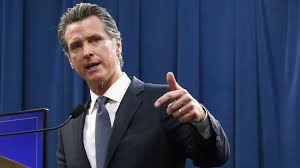 Gov. Gavin Newsom on Friday signed new gun control laws that expand the availability of gun violence restraining orders and place stricter limits on the number of firearms Californians can buy each month.

Starting in July 2021, Californians will be allowed to purchase one long gun per month. People younger than age 21 won’t be allowed to obtain those weapons, with few exceptions for law enforcement officers and military service members.

Former Gov. Jerry Brown vetoed similar proposals in 2016, 2017 and 2018, and the California Rifle & Pistol Association announced shortly after Newsom signed SB 61 that it plans to sue the state over concerns the law violates people’s Second Amendment right to obtain guns.

Under a separate law, the state will soon allow teachers and co-workers to request a court take a gun away from someone they believe to be dangerous. Currently, only law enforcement agencies and immediate family members are able to ask for a so-called gun violence restraining order.

California has seen three dozen mass shootings thus far into 2019, according to data from the Gun Violence Archive, a nonprofit organization tracking the issue. More than 12,000 people died in the state from firearms between 2014 and 2017, data from the Centers for Disease Control and Prevention shows.

“Gun violence is an epidemic in this country, one that’s been enflamed by the inaction of politicians in Washington,” Newsom said in a statement. “While Washington has refused to act on even the most basic gun safety reforms, California is once again leading the nation in passing meaningful gun safety reforms.”

Ting said it was his third time trying to expand gun violence restraining order, as Brown had vetoed a pair of similar bills in recent years.

“The biggest difference is we’ve got a new governor,” Ting said.

Among the package of 15 bills Newsom signed Friday morning were ones that extend the duration of gun violence restraining orders to a maximum of five years and require law enforcement agencies to establish written protocols surrounding the use of the petitions.

“We need to continue to do a better job of getting the word out, but now that the universe of people (able to request a GVRO) has been expanded, that will start to spread,” Ting said.

Data from the California Department of Justice show that 20 counties have yet to secure a gun violence restraining order, as of December 2018. Between 2016 and 2018, San Francisco had just one petition approved, while San Diego County obtained 203 in the same time period.

Newsom acknowledged the lack of consistency in how counties utilize the program and said California is trying to do more to train leaders across the state to address “that legitimate and appropriate concern.”

Newsom also approved a law requiring ammunition vendors at gun shows to adhere to the same regulations already in place for firearms dealers. Additionally, he signed off on a plan that would prohibit Californians from selling a large number of guns if they are not licensed to do so.

As of Friday morning, there are still a couple hundred bills on the governor’s desk. If he doesn’t take action on them by Sunday night, they’ll become law.

“We’re getting into the tougher territory,” Newsom said of the pending decisions he’ll have to make. “There are some easy ones I know I’ll be working through, and then we’ve got three marathon sessions.”