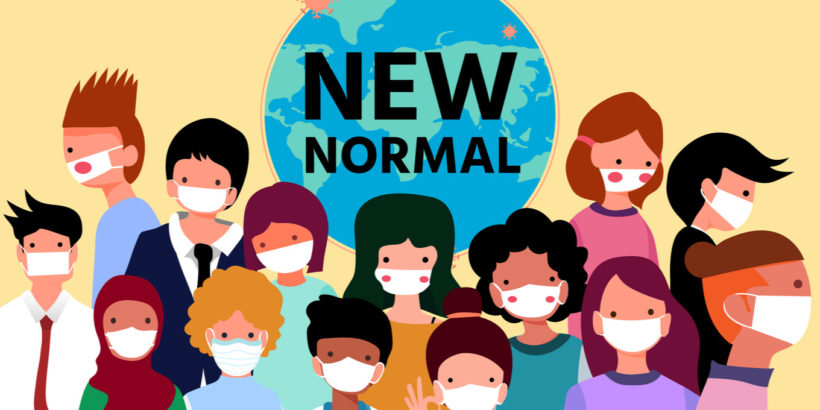 Listening to the media today, one sometimes hears the phrase “new normal.” The dictionary defines normal as “conforming to a norm or standard.” That means it is society that determines what is normal and what is not, depending on what is happening in the country.

As we begin 2021, with the usual hope and optimism, we must reflect on the year which has just passed, for 2020 also began on an extremely positive note. The economy was roaring, factories and jobs were coming back to America, the stock market was doing well, and unemployment among minorities and women was at the lowest rate ever recorded. Then “the plague” struck at the end of January, and subsequently, our world came crashing down around us; a situation which was only aggravated by George Floyd’s death.

All of us have seen and heard things during this past year that would have been unimaginable in 2019, but which today are almost a daily occurrence. We call these transformative events “the new normal.”

Apparently, our elected representatives in the House and the Senate believe the Sudanese national debt and the education of women in Pakistan are more important than their constituents. The late publisher William Randolph Hearst addressed this very issue nearly a century ago, on May 7, 1924, when he wrote: “The day when this nation ceases to shape its foreign policy primarily for the safety and welfare of the American people will be the day on which its national doom is sealed – and its international doom too.” These are only a few of the many examples of the new normal that assault and numb our senses daily.

If there is one issue that stands out in terms of importance, it would be defunding or re-imagining the police, for no civilized society can function without order, safety, and security. It is no accident that the “peaceful protesters” have made the police the number one target for vilification. This is especially true in blue states and cities where state and local governments, along with radical district attorneys, have acquiesced to all the protesters’ demands, refusing to prosecute them for their crimes and allowing them free rein to do exactly as they wish. This has resulted in their states and cities sliding even further into chaos and anarchy, as their tax base continues to move away in ever-increasing numbers.

Any normal person would stop and re-think their failed strategy but not these people. If anything, they double down on their ideology. Some might conclude they are irrational, but there is a method to their madness. It is a method that has been used before.

During the heyday of the Cultural Revolution in China, mobs of Red Guards rampaged through the streets of Beijing and other Chinese cities unencumbered by any police restraint. They assaulted anyone they deemed counter-revolutionary. Bloodied and beaten, with placards hung around their necks denouncing them for their crimes, these hapless individuals were hauled before a forum called a “struggle session” where various individuals, sometimes even their own children, would take turns denouncing them for every imaginable offense, up to, and including, “thought crimes.” The actual number of people killed during the Cultural Revolution is unknown, but it is believed to be in the millions. The purpose of all this was twofold. The first was to solidify Mao’s position as absolute ruler of China. The second was to cow an entire population into submission and obedience through fear, terror, and intimidation. It is a very effective tactic. Every single totalitarian state throughout history has used similar methods to ensure its continued rule.

The U.S. is on the verge of becoming a country in decline, ceding to China the position of dominant world superpower. One could say that this is part of the ebb and flow of history. Every single great civilization from the Greeks, Egyptians, and Romans in ancient times to the Aztec, Inca, and Mayan civilizations in our own hemisphere has gone through this process. Even the once-mighty British Empire, which at one time controlled a third of the world, and of whom it was said, “The Sun Never Sets On,” has withered away into near obscurity.

If you were to “time warp” back to Moscow in 1990 and tell the first Russian you met that within a year his country would implode, he would look at you as if you were crazy. The collapse of a great civilization can occur slowly over time as it did with Rome and Britain, or it can happen suddenly, as with the Soviet Union. Great civilizations go through an aging process and right now, ours is looking very old.

However, aging doesn’t mean dead. We can buck the historic trend. It’s true that we have forgotten the ideals that once made us great, and replaced the “old normals” of liberty, individual responsibility, equality, and unity with the “new normals” of identity politics, wokeness, cancel culture, and critical race theory.

In a speech on May 14, 1920, over a century ago, President Warren G. Harding warned the nation that: “America’s present need is not heroics but healing; not nostrums but normalcy; not revolution but restoration.” It’s time again for Americans to assert normalcy and restoration. And then, yes, America can and will be great again.