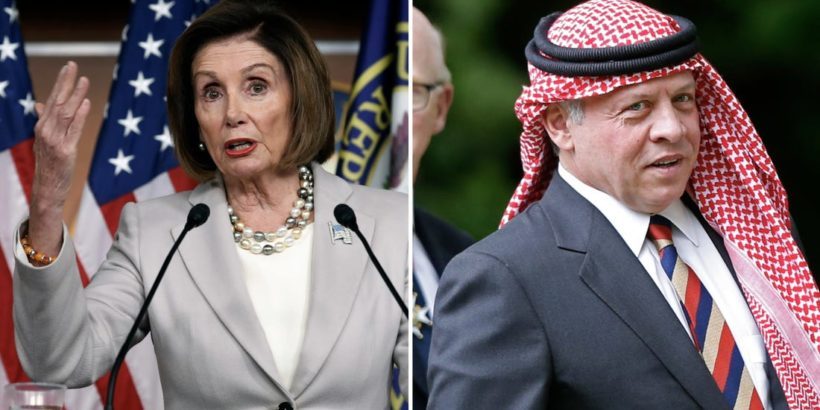 House Speaker Nancy Pelosi (D-Calif.) and a delegation of mostly Democratic lawmakers are in Jordan to meet with top Jordanian officials on Syria.

Thornberry, who is not seeking reelection, is the only Republican to join Pelosi. He is a ranking member of the House Armed Services Committee.

She said that they “expressed our continued appreciation for the strategic partnership between the U.S. and Jordan and engaged in a constructive dialogue on regional stability, counterterrorism, security cooperation, Middle East peace, economic development and other shared challenges.”

She then noted that the delegation is visiting Jordan amid the crisis in Syria and Turkey’s incursion.

“Our delegation has engaged in vital discussions about the impact to regional stability, increased flow of refugees, and the dangerous opening that has been provided to ISIS, Iran and Russia,” Pelosi said.

Jordan is located directly south of Syria, and the two countries share a 233-mile border.

On Friday, President Donald Trump hailed a ceasefire that was brokered between Turkey and Kurdish forces in the region.

“We’ve had tremendous success I think over the last couple of days,” Trump said on Friday, reported The Associated Press, adding that “we’ve taken control of the oil in the Middle East.”

At the Pentagon, Defense Secretary Mark Esper said U.S. troops are continuing their withdrawal from northern Syria. He also said no U.S. ground troops will participate in enforcing or monitoring the cease-fire. “The force protection of our service members remains our top priority and, as always, U.S. forces will defend themselves from any threat as we complete our withdrawal from the area,” Esper told reporters.

Trump’s plan to withdraw troops from the region has drawn backlash from a number of lawmakers, Republican and Democrat alike.