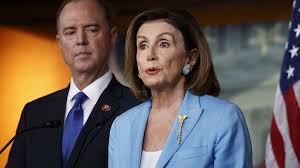 McCarthy sent a letter on Oct. 3 to Pelosi asking her to suspend the impeachment inquiry into President Donald Trump until she puts into place “transparent and equitable rules and procedures.”

He said there was a slew of issues with the inquiry, including the lack of a vote on whether to launch it. Pelosi announced the inquiry on Sept. 24.

In a letter responding to McCarthy (pdf), Pelosi said that there is no need for a vote to launch an impeachment inquiry.

“The existing rules of the House provide House Committees with full authority to conduct investigations for all matters under their jurisdiction, including impeachment investigations,” she wrote.

“There is no requirement under the Constitution, under House rules, or House precedent that the whole House vote before proceeding with an impeachment inquiry.”

“As you know, our Founders were specifically intent on ensuring that foreign entities did not undermine the integrity of our elections,” she continued. “I received your letter this morning shortly after the world witnessed President Trump on national television asking yet another foreign power to interfere in the upcoming 2020 elections. We hope you and other Republicans share our commitment to following the facts, upholding the Constitution, protecting our national security, and defending the integrity of our elections at such a serious moment in our nation’s history.”

McCarthy’s letter to Pelosi came after the revelation that Rep. Adam Schiff was aware of information in the whistleblower’s complaint—the trigger for the impeachment inquiry—before the complaint was filed, sparking outrage from a number of lawmakers who said he should step down from his chairman position. Schiff said he regretted “not being more clear.”

Pelosi in the letter was referring to Trump on Wednesday saying he thinks China and Ukraine should probe the past actions of former Vice President Joe Biden and Biden’s son, Hunter Biden, who was involved with an energy company in Ukraine until earlier this year and is still active in an investment company in China.

Asked if he asked Chinese President Xi Jinping to help probe the Bidens, Trump replied: “I haven’t, but it’s certainly something we can start thinking about.”

“I would say [Ukrainian] President [Volodymy] Zelensky, if it was me, I would start an investigation into the Bidens because nobody has any doubt that they weren’t crooked,” he also said. “[Hunter Biden] had no knowledge of energy, didn’t know the first thing about it, all of a sudden he’s getting $50,000 a month plus a lot of other things.”