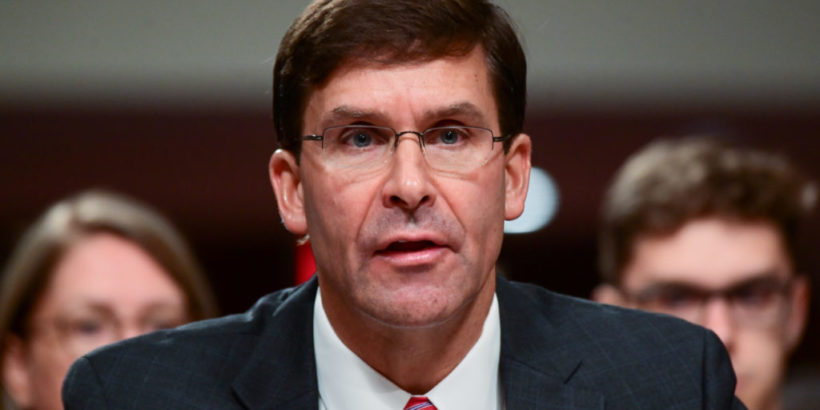 China steals Western capabilities, intimidates smaller nation states and seeks “advantage by any means and at any cost,” U.S. Defense Secretary Mark Esper cautioned on Saturday as he cast the world’s most populous nation as a disruptive threat to world order.

Esper used an address at the 2020 Munich Security Conference in Germany to give a comprehensive condemnation of China that he said topped the Pentagon’s list of potential adversaries, followed by Russia and “rogue states” such as North Korea and Iran.

“The Chinese Communist Party is heading even faster and further in the wrong direction – more internal repression, more predatory economic practices, more heavy-handedness, and most concerning for me, a more aggressive military posture,” he said.

He said Beijing has made clear its long-term intentions and said Europe and the rest of the world must “wake up” to the threats that China poses.

He also accused Beijing of deploying a “nefarious strategy” through the telecommunications firm, Huawei.

The warnings follow a similar one made last September in London when Esper cautioned European allies to be wary of China’s growing global influence, as Breitbart News reported.

On that occasion Esper said countries that grow too dependent on Chinese investment and trade become susceptible to coercion and retribution when they cross Beijing.

Esper was making the case for the Trump administration’s argument for doing more to counter what he called efforts by China and Russia to “disrupt the international order” to gain advantage.

He returned to that theme again on Saturday, oulining the risks involved.

“The Communist Party and its associated organs, including the People’s Liberation Army, are increasingly operating in theaters outside its borders, including Europe, and seeking advantage by any means, and at any cost,” he said.

“While we often doubt the transparency and forthrightness of Beijing, when it comes to their security aims, we should take the Chinese government at its word,” he said. “They have said that by 2035, the PRC intends to complete its military modernization, and, by 2049, it seeks to dominate Asia as the preeminent global military power.”

With words that echoed the Trump administration’s criticisms of Iran, Esper said China represses its people and threatens its neighbors.

“We want China to behave like a normal country,” Esper said, adding “and that means the Chinese government needs to change its policies and behaviors.”

Chinese Foreign Minister Wang Yi, speaking at the conference later in the day, dismissed the U.S. criticisms, and accused Washington of engaging in a “smear campaign” against Beijing.

Wang said Esper’s comments about the Communist single-party state’s intentions were “not based on facts.”

“I can categorically say that all accusations against China are lies,” Wang said, adding: “But if we replace the subject of the lie from China to America, maybe those lies become facts.”

AP contributed to this report