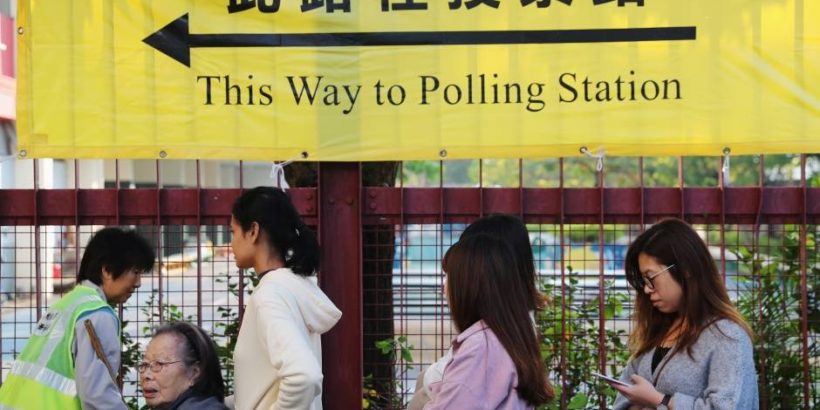 Hong Kong’s pro-democracy camp has coasted to a landslide majority in the city’s district elections on Nov. 24, indicating a groundswell of support for the ongoing protest movement against the Chinese regime’s encroachment.

Democratic candidates secured more than half of the 452 district council seats for the first time as residents turned out in record numbers on Nov. 24 to cast votes.

The election has widely been seen as a referendum on the pro-democracy protests that have rocked the city for almost six months.

Democratic Party member Ted Hui, who won the seat of Chung Wan and is a supporter of the ongoing movement, said the poll results showed that the people are “for democracy.”

“I see myself as one of the protesters, and now, people voted for me, they voted for protesters. That is the message,” he told local broadcaster RTHK. Hui was recently arrested for allegedly trying to stop police from arresting a couple during clashes between protesters and police.

Since June, demonstrators have taken to the streets in droves to voice their discontent at Beijing’s interference in the city’s affairs. Tensions between protesters and the Hong Kong government and police have escalated amid mounting allegations of police brutality against protesters.

As of 7 a.m. local time, pro-democracy groups had secured a total of 334 seats, while the pro-establishment camp scored 37. A record 1,104 candidates were vying for 452 seats.

On Nov. 24, a record number of about 2.94 million people went to the polls, with a record turnout rate of 71.2 percent. The turnout was two times as large as the last district election in 2015.

Jimmy Sham, a candidate for the Civil Human Rights Front, which organized some of the largest rallies, won his electoral contest and said the turnout should be a sign to the government that it should listen to their voices.

“This election is special because it is a formal confrontation between pro-establishment and pro-democracy parties after months of unrest caused by the misstep of government,” he said, standing with crutches just weeks after he was beaten by men with hammers during a rally in October.

“It is a victory for the people of Hong Kong.”

Other successful pro-democracy candidates included Lester Shum, who was a student leader of the Umbrella Movement in 2014, and Kelvin Lam, who stood in after activist Joshua Wong was barred from running.

“[Hong Kong leader Carrie Lam] said that she represents the majority of the Hong Kong people. But the result of the election shows the other way. If I was Carrie Lam, I should prepare for the speech of my resignation,” pro-democracy activist and legislator Leung Kwok-hung said.

“We won a small battle today but it shows that Hong Kong people have a chance to win the war. We will fight on,” said Civic Party member Henry Sin Ho-fai, a pro-democracy candidate who won by 5,194 votes.

Several pro-Beijing incumbents were unseated in shock defeats, including legislator Junius Ho, who lost his seat in the Lok Tsui district council of Tuen Mun to his rival by about 1,200 votes. He said in a Facebook post that the poll result was “unusual” and had “turned heaven and earth upside down.”

Ho has courted controversy over his conduct during the protests. In July, he was seen shaking hands with individuals allegedly linked to a mob attack on train passengers, many of whom were protesters, at the Yuen Long metro station. About 100 men wearing white shirts indiscriminately attacked passengers with sticks and metal poles, leading to 45 injuries.

His defeat was celebrated by more than 100 pro-democracy supporters in Tuen Mun, who cheered and popped open champagne bottles. Similar scenes were repeated throughout the city, with crowds reveling in pro-establishment groups’ defeat.

“This is only the beginning of the battle,” he said, while expressing appreciation to young voters for their support.

The election saw around 58,000 new voters in the age range of 18 to 20, according to the Registration and Electoral Office.

The lead-up to the election was marred by the arrests of multiple pro-democracy candidates, as well as attacks on politicians and activists. Pro-democracy lawmaker Andrew Chiu, whose ear was partially bitten off by knife-wielding assailants, secured a second term in Taikoo Shing with 4,390 votes.

Millions of Hongkongers stood in lines stretching for blocks on Nov. 24 to cast their votes in the city’s district council elections, which was widely seen as a test of support for the government amid a months-long pro-democracy movement that has racked the city.

Hong Kong’s Chief Executive Carrie Lam said she was “pleased” to see a “relatively peaceful and calm environment” to conduct the elections, adding that she hoped the election will show “we want a way out of this crisis so that we can have a fresh start.”

“To say no to tyranny, the ballot on our hand is very important,” Anson Chan, former chief secretary of the Hong Kong administration, told The Epoch Times before casting her vote. She said the election was an opportunity to show the government the real public sentiment.

David Alton, a member of the House of Lords and vice chair of the Westminster Friends of Hong Kong, was among a number of international observers in Hong Kong to monitor the election proceedings. He hailed Hongkongers’ “unprecedented enthusiasm.”

“Many people expressed their desire to be able to hold to account the city’s leaders, through the ballot box—especially in preserving basic freedoms, autonomy and the rule of law—not rule by law,” he wrote in a Facebook post.

Pop singer and activist Denise Ho said that the vote is an “indirect referendum” and part of the protest movement.

She told Epoch Times affiliate NTD earlier in the day that since the pro-democracy movement began, Lam and pro-establishment parties “have been trying to deliver this message that those who are on the streets, and who are fighting for the freedoms, are the minority.”

She said if the pro-democracy camp dominates the election, “that would be a clear message to the government that we are not the minority here.”