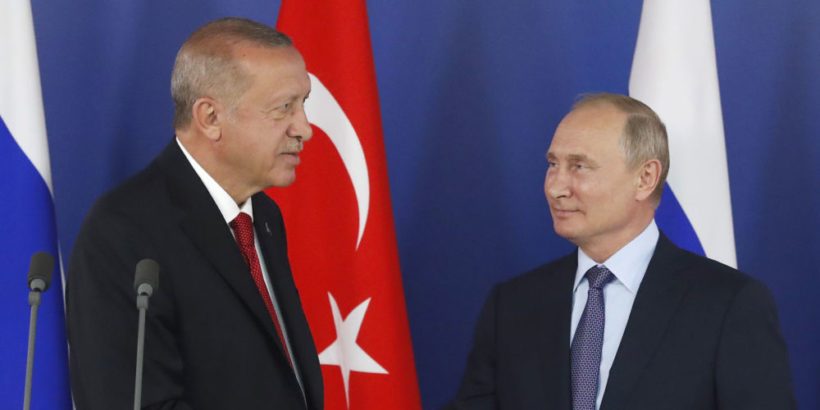 After several hours of talks, the two leaders said a “safe zone” would be implemented in northeastern Syria, and they would initiate joint patrols in the area. The announcement comes days after Turkey incurred into northern Syria on Oct. 9 to remove Kurdish fighters that it has described as “terrorists” from the area.

According to the deal, starting on Wednesday, Russian forces and Syrian border guards will “facilitate the removal of [Kurdish] YPG elements and their weapons to the depth” of 30 kilometers (20 miles) from the Turkish-Syrian border.

After five days, Russian and Turkish patrols “will start in the west and the east of the area of Operation Peace Spring with a depth of 10 kilometers (6.2 miles), except Qamishli city,” said a memorandum of understanding between the two nations.

Russia and Turkey, it added, will also work to contain “terrorist elements” from springing up in the area. The memorandum didn’t elaborate.

The YPG, the key component in the Syrian Democratic Forces (SDF) that have for years fought alongside U.S. troops against ISIS, will also leave the towns of Tel Rifaat and Manbij under the deal, Reuters reported.

“This operation also guarantees Syria’s territorial integrity and political unity… We never had any interest in Syria’s land and sovereignty,” Erdogan said at the press conference. “The main aim of the operation is to take out PKK/YPG terror organizations from the area and to facilitate the return of Syrian refugees,” he remarked.

The move comes about two weeks after the White House announced the withdrawal of American forces from the border area, precipitating Turkey’s incursion into the Syrian border region. However, U.S. officials, including Secretary of State Mike Pompeo, said President Trump is prepared to use military force again.

“We prefer peace to war,” Pompeo said on Monday. “But in the event that kinetic action or military action is needed, you should know that President Trump is fully prepared to undertake that action.”

Trump told reporters at a Cabinet meeting that American “never agreed to protect the Kurds for the rest of their lives.”

“We’re not going to take a position. Let them fight themselves,” Trump said, referring to the Turkish-Kurdish conflict.

On Monday, Trump authorized $4.5 million in direct support to the Syria Civil Defense to continue its “important and highly valued work” in Syria.

“The United States encourages our allies and partners to join us in our support for the SCD and in our efforts to protect civilians, religious and ethnic minorities, and other innocent victims of the Syrian conflict,” the White House said in a statement.