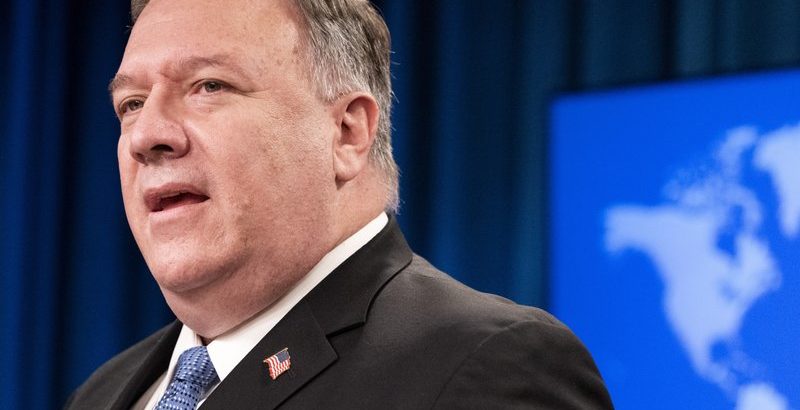 In an interview with The Epoch Times’ “American Thought Leaders” program, Secretary of State Mike Pompeo elucidated on the Trump administration’s efforts to reconnect modern America to its founding origins based on God-given rights and described the present administration’s foreign policy of keeping America safe from the worldwide threat of communism.

At the outset of the interview, host Jan Jekielek asked Pompeo why it took so long for the United States to sanction the Chinese Communist Party for gross human rights violations against practitioners of the meditation group Falun Gong.

Pompeo explained that the reason for the disregard of the CCP’s (Chinese Communist Party) grave human rights violations was a great extent due to the existence of a belief that if the United States engaged in fair and reciprocal trade and engagement, the situation would ameliorate, however, reality showed that the idea was clearly “false all the way through.”

He continued to answer by saying that President Donald Trump understood the failure of that engagement policy from the outset and changed the American stance fundamentally, adding that it was not just the United States that has changed its view of China, but the whole West.

“Even when you look at Europe and Australia and Southeast Asia, they know to, they know that the Chinese Communist Party is up to no good.”

Pompeo added that while dissidents were sending out warnings about the CCP’s wrongdoings, the United States was involved in very serious counterterrorism operations and the focus was taken off the CCP.

“We took our eye off this enormous threat and now it’s now upon us. It’s now inside the gates, the Chinese Communist Party is here in America, and the Trump administration has begun in every dimension to turn the ship in the right direction, to get America to once again do the right thing and protect itself from this communist threat in China.”

Pompeo was then asked why he has been more focused on religious freedom than any other Secretary of State.

“It’s at the center of every civilization, this idea that human beings have inherent dignity because of their humanness. And if you get that piece wrong, bad things flow from that.”

Pompeo said that under Trump’s leadership, they have focused on religious freedom not just in China but particularly with the CCP.

“We’ve seen what they’re doing to the Uyghurs in the western part of the country. We’ve seen what they’ve done to Tibetans. We now see them doing the same thing to other ethnic minorities, including the people in Mongolia and the north part of China. And then Christians throughout the entire country,” Pompeo said.

“These things that are fundamental affronts to human dignity are something that is a hallmark of authoritarian regimes and General Secretary Xi Jinping is no different. He knows that he has to extend ever-increasing power and control in order to maintain his capacity to rule. And that shuts out the important space that religious freedom should have for every human being in the world,” he continued.

Pompeo said the administration has done their best to shine a light on these violations and is confident that: “The world will keep up this drumbeat, demanding simply that the Chinese Communist Party permit people to exercise their God-given rights to practice, and not practice their faith in the way that they so choose.”

He explained why he has emphasized a clear difference between the Chinese Communist Party and the Chinese people, explaining that the people who live there are good but are sadly “under the jackboot of an authoritarian regime.”

“Chinese people who live all across the world, including here in the United States of America, we want to honor them, and we admire them. And we hope that they too will join the call to change the nature of how this regime behaves in its international activities,” Pompeo said.

Pompeo clarified that people around the world are now seeing more clearly that the CCP is up to no good, “I’m confident that this pressure that is now on the Chinese Communist Party is real. And not just because leaders are demanding it, because people all across the world can see it, the true face of the Chinese Communist Party has been exposed.”

Trading with China fairly or having Chinese students in the United States is not a problem, he said, as long as they don’t break rules that would compromise American security or freedom.

Pompeo stated the reason for his distrust of the CCP: “Every experience I’ve had, in my six years as a member of Congress, in now four years serving in the Trump administration, would suggest that anything but distressing anything that comes from the Chinese Communist Party, is folly. They’ve broken promise after promise after promise.”

At the last section of the interview, he was asked about the importance of the Commission on Unalienable Rights (pdf).

He explained that it is about reconnecting to the idea upon which the United States was founded—the intrinsic and natural God-given rights that were provided to humans and recognized by the Founding Fathers, not created by them.

“It reminds us of the greatness of America and how smart and capable our founders were and why that is so central to the successes that our nation has had,” Pompeo said, “I wanted to get us back to that tradition.”