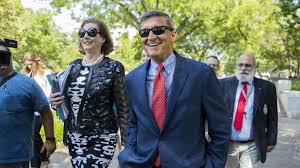 She informed Barr that she was intending to demand production of a large volume of evidence and suggested “a just resolution” to the Flynn case “if the evidence shows what we believe to be true.” She also made several requests, including for Barr to replace the prosecution team on the case and to determine “when, how, and on what basis the first investigation of General Flynn began.”

The letter, marked confidential and dated June 6, was released by the Flynn case prosecutors with minor redactions on Oct. 1 (pdf).

Flynn, former head of the Defense Intelligence Agency and former national security adviser to Trump, pleaded guilty on Dec. 1, 2017, to one count of lying to FBI agents during a Jan. 24, 2017, interview.

The letter outlines a plethora of documents that Powell believed would show that the agents didn’t have a proper reason to interview Flynn to begin with.

“It is increasingly apparent that General Flynn was targeted and taken out of the Trump administration for concocted and political purposes,” she said. “We believe there is specific evidence of that fact. He was the tip of the spear aimed at President Trump.”

Powell demanded that prosecutors produce dozens of pieces of evidence in an Aug. 30 court filing that to a degree mirrors the June letter. She also moved to have the judge hold the government in contempt of court for withholding the documents.

On Oct. 1, the prosecutors responded by refusing to produce anything in response to the request (pdf). Of the 49 points of evidence, they said 20 have already been provided and that the rest were mostly not relevant of helpful to the defense. Only on two points, though, did they say the document didn’t exist or the government didn’t have it. Three points were marked as overly broad.

The prosecutors focused on the fact that Flynn already pleaded guilty and on their assertion that most of the requested documents were not related to Flynn’s alleged offense—lying to the FBI.

Instead, they labelled as “conspiracy theories” Powell’s suspicions that the government and the prosecutors behind the Flynn case in particular acted improperly and with improper motives.

Flynn has until noon on Oct. 22 to file his response.

Fruit of the Russia Probe

Powell’s suspicions are backed by several factors suggesting Flynn was one of the targets in the 2016 FBI counterintelligence investigation targeting Trump campaign associates.

That investigation was taken over in 2017 by special counsel Robert Mueller, who in his final report in March noted that the FBI had opened an investigation into Flynn “based on his relationship with the Russian government” sometime prior to Dec. 30, 2016 (pdf).

The probe failed to establish that anybody from the Trump team colluded with Russia to meddle in the 2016 election, the report said.

Barr confirmed that the Trump campaign was spied on by the government in 2016 and said he would look into whether that surveillance was properly predicated.

Powell alleged in her letter that two former CIA officials, David Shedd and Mike Vickers, might have been responsible for setting up payments from a secretive Defense Department think tank to Stephan Halper, a Cambridge lecturer who was de facto outed as an FBI informant used to snoop on Trump campaign associates.

A Russian-born UK-based historian, Svetlana Lokhova, filed a defamation suit against Halper in May, alleging that he spread lies to the media, which led to a flurry of stories starting in late 2016 that left many people with the impression that Lokhova was a Russian spy who engaged Flynn in a relationship, or possibly an affair, on behalf of Russian intelligence.

Powell also suggested the Special Counsel’s Office (SCO) manipulated media to hold back in 2017 on reporting about text messages between then-FBI officials Peter Strzok and Lisa Page until after Flynn entered his plea. Strzok, formerly the FBI’s deputy assistant director, was in the leadership team on the Russia counterintelligence probe and was one of the two agents who interviewed Flynn.

The texts showed that Strzok held a strong animus toward Trump and led to his getting fired from the Mueller team and eventually from the FBI. He later filed a lawsuit protesting the firing.

Powell said the government “appears to have” had the texts since July 2017, but only told Flynn about them on Nov. 30, the day before he pleaded guilty. Moreover, Flynn was only told that “electronic communications” of one agent “showed preference for one of the candidates for President” and that the Justice Department’s Inspector General (IG) was probing whether that constituted misconduct.

After Mueller was told by the IG about the texts, Mueller went to then-Deputy Attorney General Rod Rosenstein “to get authority to target [Flynn’s son,] Michael Flynn, Jr.” for allegedly violating the Foreign Agents Registration Act (FARA). Flynn was told he could also face the charge, even though FARA violations are almost never prosecuted (only seven cases in more than 50 years).

“The government told defense counsel in the summer of 2017 that it was going to indict the FARA case then, had obtained authorization to target Michael Flynn Jr.—who had a newborn—and had seized all his electronic devices,” Powell said in a Sept. 30 court filing (pdf).

“Suddenly, SCO was making extreme threats and placing enormous pressure on General Flynn to enter a guilty plea,” Powell said in her letter, also stating that he “was threatened with the public arrest, search of his home, the indictment of his son.”

The day after Flynn’s plea, On Dec. 2, 2017, The Washington Post ran a story on the Strzok-Page texts.

Powell suggested somebody from the Mueller team, possibly prosecutors Brandon Van Grack and Andrew Weissmann “persuaded the press to sit on the Strzok story.” The prosecutors dismissed that suggestion.

On Dec. 7, U.S. District Judge Rudolph Contreras recused himself from the case for undisclosed reasons. The Page-Strzok texts reportedly show that the FBI officials knew Contreras and in July 2016 discussed organizing a dinner party as a cover to meet him upon learning that he was appointed to the secret court that approves government spying warrants under the Foreign Intelligence Surveillance Act (FISA). It’s not clear whether the dinner party took place.

Powell suspected the government took out a FISA warrant on Flynn, though that hasn’t been confirmed. She’s requesting documents related to any such warrant.

District judges are assigned cases at random. The one to get the case after Contreras was Judge Emmet Sullivan.

The FARA case against the Flynns was based on a lobbying job their now-defunct consultancy firm, Flynn Intel Group (FIG), did in 2016 for Kamil Ekim Alptekin, a businessman with ties to the Turkish government.

Flynn’s statement of offense accompanying his plea acknowledged that FIG falsely stated in its FARA registration forms that it “did not know whether or the extent to which the Republic of Turkey was involved in the Turkey project.”

Prosecutors ultimately did bring charges in that case, yet not against the Flynns, but against Flynn’s former business partner in FIG, Bijan Rafiekian. They only did so, however, more than a year after the Flynn indictment, “just a few days before Mr. Flynn was to be sentenced in this Court—when the government was concerned that Mr. Flynn would withdraw his plea,” Powell said in the Sept. 30 filing.

Flynn was supposed to testify in that case, but when Van Grack wanted him to say he signed FIG’s FARA forms knowing there were falsities in them, he refused, saying he only became aware of the falsities later. That “prompted a heated tirade from Mr. Van Grack,” Powell said.

The prosecutors called off Flynn’s testimony and instead wanted to brand Flynn a co-conspirator, putting Flynn Jr. on the witness list as well.

That didn’t pan out. In the end, the prosecutors in the Rafiekian case didn’t include any testimony from the Flynns. The prosecution didn’t think Flynn’s testimony “would be of any use” to the jurors, Assistant U.S. Attorney James Gillis said during his July 22 closing statement.

The judge in the Rafiekian case, Anthony Trenga, acquitted Rafiekian on Sept. 24.

Trenga’s opinion, Powell said, “renders meaningless the FARA-related section” of Flynn’s statement of offense and further “magnifies” the significance of her requested documents “in the overall government misconduct in this case.”