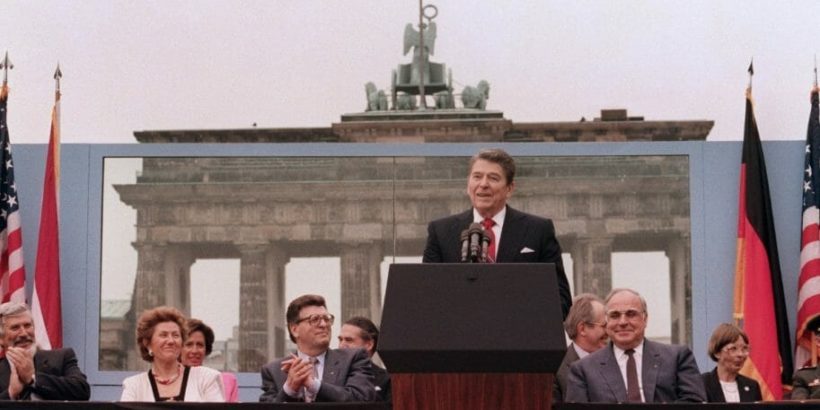 As Germans celebrate the 30th anniversary of the fall of the Berlin Wall—the iconic collapse of communism in Europe—some of them worry that the spirit of Marx stirs in the shadows of the Iron Curtain.

Berliners on Saturday rejoice that what’s left of the slabs of concrete that for decades cut their city in two—one free, one oppressed—is today an artifact on which to display memories, like Regan calling on Gorbachev to “Tear Down this Wall!”

In today’s Europe, however, some worry that freedom is once again at risk.

Former East German political prisoner Vera Lengsfeld, who witnessed the fall of the Berlin Wall, argues that socialism in Germany is looking to stage a comeback.

“After the collapse of the state-led economy in what was then East Germany, policymakers are now busy trying to introduce new state plans in the economy,” Lengsfeld told The Epoch Times. As examples, she cited the German Renewable Energy Sources Act, which introduced a green electricity feed-in tariff scheme, as well as recent calls for collectivization by a youth movement within Germany’s co-ruling Social Democratic Party (SPD).

Earlier this year, Kevin Kühnert, the head of “Jusos” or Young Socialists, told the German weekly Die Zeit that the state should take over major German companies like BMW.

Kühnert added what’s key is that there would no longer be a “capitalist owner” of the company.

He also lashed out at people who rent out property for profit.

“Thinking it through logically, everyone should own no more living space than they themselves live in,” Kühnert said, calling for policies that would see the German state take away huge swaths of housing stock from rightful owners.

His comments sparked a backlash, also from major figures in the SPD, most memorably from Johannes Kahrs, a member of the more economically liberal arm of the party, who tweeted: “What terrible nonsense. What was he smoking? It can’t have been legal.

But while even the General Secretary of SPD, Lars Klingbeil, said in a tweet that Kühnert was describing a “social utopia,” there were those in the party that said his rhetoric fell squarely within the party’s principles.

Ralf Stegner, the SPD’s deputy leader, also downplayed the controversy as a “storm in a teacup,” revealing perhaps that the goalposts have shifted left, and what once was considered radical has been pushed into the mainstream.

Lengsfeld, who after German reunification became a politician representing both the Alliance 90/The Greens and then the CDU in the Bundestag, sees Kühnert’s comments as signposts on a road lined with the horrors of socialism.

“A huge part of German elites have simply not learned the lessons of history,” she insists, “otherwise they would be clear that state-controlled property and industry leads not to wealth for all, but poverty for all.”

“All the experiments Kevin Kühnert is asking for have been carried out in the Soviet Union and it was a disaster.”

Lengsfeld said she believes that, for the most part, the people nostalgic about communism or dream of a “socialist paradise” in Germany are either former East German elites who drew benefits from the resources and power they controlled, or naive Germans who never experienced it firsthand but are enamored with utopian notions about social justice, reduced inequality, and greater social welfare. She said ordinary people who suffered under communism generally hate the idea of its resurgence.

Kai Weiss, a Research Fellow at the Austrian Economics Center and a board member of the Hayek Institute, is more pessimistic.

“As in most other parts of the Western world, Germany has also seen a resurgence in socialist thought in recent years,” Weiss told The Epoch Times.

“Kühnert’s example is particularly illuminating: he was born in West Berlin, at the doorsteps of the Communist regime, but only in 1989, months before the fall of the Berlin Wall. He still embraces socialism,” Weiss explained. “The issue is that young people have a much easier time embracing these ideas, because they have never lived through or experienced the consequences of these disastrous ideas.”

“It is not only young people, however,” Weiss argues. “There is a certain sense of nostalgia among East Germans of the ‘good old days.’”

“This is perhaps because expectations of the post-communist world were too high and there were too many promises made to East Germans,” Weiss said. “To this day, they earn (often much) less than West Germans.”

“Socialism has been tried a gazillion times and the results are always the same: mass poverty, destruction, misery, tyranny, and death. And it can’t work, as economists like Ludwig von Mises and Friedrich von Hayek have shown many decades ago already,” Weiss said. “Socialists will, of course, say that examples like the Soviet Union, Venezuela, or Cuba have not actually been socialism. But there is a strange progression among socialists that whenever a socialist project starts, they will celebrate the Chavez’s and Castro’s of this world. But then when poverty reigns, breadlines come into being, and the government fights its own people, it’s suddenly not socialism anymore.”

Jeff Nyquist, author of “Origins of the Fourth World War” and outspoken critic of Karl Marx, argues that his ideas didn’t lead to disaster due to poor implementation but that “it was Marx’s intention to destroy.”

“He was a malevolent person,” Nyquist told The Epoch Times. “Maybe he was a malignant narcissist, maybe a sociopath.”

“You look at his own life, the marks of badness. Wherever his ideas, his spirit, goes, it’s also bad. Because what people need is freedom. They need to be able to develop and to work out their lives, not to be burdened with all this nonsense, with the state having an excuse to domineer and to control everybody and everything.”

Nyquist dismissed notions that socialism would have worked if, as modern proponents claim, it had been implemented “correctly.”

Nyquist points to some 100 million deaths in the 20th century attributed to communism, as well as to other forms of desolation.

In the Shadow of the Iron Curtain

Describing life under communism, Lengsfeld said that while East German elites enjoyed power and privilege, everyday people had it hard.

“It was a dictatorship,” she said. “There were no democratic freedoms or rights.”

Basic necessities were in short supply, she said, not to mention “luxuries” like cars, washing machines, or bathroom tiles.

“The economy was guided by a state plan and this never works. It certainly didn’t work in East Germany,” Lengsfeld said, citing routine shortages.

“We didn’t starve like in the 40s, but there was a constant lack of certain products and you had to have lots of time to get everything you wanted. You had to wait about 10 years to get a car. At the end of East Germany, you had to wait 15 years for a car. Or you had to wait 5-10 years for an apartment. For other goods, a washing machine for instance, you had to wait 1 or 2 years. If you needed tiles for your bathroom, you had to find out where there was going to be a delivery and stand in line for 48 hours. And then you had two types to choose from—white or blue.”

People who dared to oppose the state had it the worst.

“Anyone who acted against the dictatorship endured repression,” she said. “You could lose your job, as I did. You were forbidden from traveling freely. You couldn’t leave the country, not even to other socialist countries. My apartment was raided by the secret police—called the Stasi.”

Peaceful forms of protest, like publicly drawing attention to rights ostensibly guaranteed in the Constitution, were punished harshly.

Lengsfeld was arrested in January 1988 in East Berlin carrying a poster featuring Article 27 of the Constitution of East Germany, which said: “Every citizen has the right to express his opinion freely and openly.”

She was thrown into Hohenschönhausen, a prison complex used by the secret police.

“It was a very special prison because it was set up for complete isolation. Really complete. A prisoner didn’t know where he or she was,” Lengsfeld recounted. “I was taken to prison blindfolded and I was never told where I was. I never met, never heard, never had any contact with other prisoners.”

“It was totally silent at this prison,” she said.

“There was nothing inside my cell except a wooden plank, washing basin, a small table, and a stool,” she said.

“Nothing to read, nothing to write, no window, only stones with a small gap for fresh air.”

She said she was interrogated repeatedly but never beaten.

“It was policy that political prisoners were not to exhibit torture marks,” she said, explaining that this was done to minimize evidence of mistreatment and prevent claims of abuse. “This was only the case with inmates at this particular prison, though,” she added, saying that if prisoners were later moved to regular prisons, they faced physical abuse.

Psychological pressure that bordered on mental torture, however, was this prison’s expertise.

“They took me out for 30 mins a day into an open air cell, which was 8 meters long, 4 meters wide. The walls were 4 meters high. One could see the sky, nothing else. Guards walked across a bridge over top of the cell, armed.”

Isolation, she said, was a tool of manipulation.

The psychological trick, she explained, was that if a human is kept in solitary confinement for long enough, he or she will speak to any human being, even it’s their interrogator. Three days of isolation, she said, and she was ready to talk.

“I asked him right away whether he knew that solitary confinement is regarded as torture under international law,” she said.

“Oh no, nothing like that, we were just looking for an appropriate cellmate for you and it took a little time,” replied a man Lengsfeld described as an “expert in psychology.”

Lengsfeld said that when she was led back to her cell after the interrogation, a cellmate was there waiting.

“She was my age, she had three children like me, she had a similar academic career, and faced similar charges,” she said. “I was suspicious of her.”

“During the next interrogation I was asked, ‘How do you like your new cellmate?’” Lengsfeld recounted.

She said she replied, “I find her very cordial and I hope the comrade will get money for her stay in my cell because it must have been hard for her.”

“Zero reaction,” Lengsfeld said of her expert interrogator, saying that he quizzed her for another few hours but never again brought up her cellmate.

She said when she was taken back to her cell, the woman was gone.

Lengsfeld was eventually given a choice at trial to either face six months in prison or leave the country. She chose to leave, only to return to East Berlin on Nov. 9, the day the wall fell.

She said when she arrived at a checkpoint at around 10 p.m., there was already a huge crowd.

“All the border guards stood motionless,” she said. “People covered them with flowers, tied colorful bows in their caps, attached them to their buttons.”

“They didn’t move, they were like wax puppets with machine guns, weapons slung over their shoulders.”

“I went to the senior officer in that row. I looked into his eyes and asked ‘How do you feel?’ but he didn’t reply, didn’t move a muscle.”

She said the crowd then descended on a quiet bus station, surprising a lonesome bus driver.

“He was shocked to see us and came out of his bus,” she said and asked where all these people had come from.

“From the East, the border is open!” Lengsfeld said people shouted.

“Come into my bus!” he offered, Lengsfeld recounted. “He then left his route and gave us a spontaneous bus tour of Berlin.”