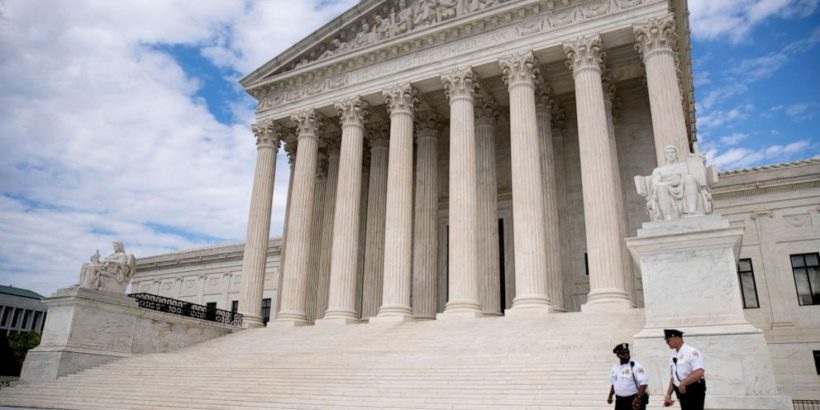 The Supreme Court on Monday rejected to hear the Trump administration’s request to strike down several provisions of a California “sanctuary” law that limits the cooperation between state and local law enforcement and federal immigration agents.

The Trump administration appealed to the high court after lower courts refused to enjoin several provisions of the California Values Act, or Senate Bill 54 (SB 54).

The top court decision to deny the administration’s petition to review the case leaves in place a federal appeals court decision that upheld portions of the Californian law (pdf). The court did not provide any reasons for the denial but noted that Justices Clarence Thomas and Samuel Alito would have granted the petition for review.

The administration had asked the courts to strike down SB 54 provisions (pdf) that prohibit state and local law enforcement officers from sharing information about an illegal immigrant’s release from custody, personal information, and physical description to immigration agents. Moreover, the law also bars state and local officers from transferring these individuals to immigration agents unless in exempted circumstances like under a court warrant.

The federal government argues that SB 54 “concededly ‘frustrate[s]’ and ‘obstructs’ federal immigration enforcement,” as it eliminates the chance for immigration agents to take illegal immigrants into custody prior to release.

“The ‘supremacy of the national power’ in this area ‘is made clear by the Constitution, was pointed out by the authors of The Federalist in 1787, and has been given continuous recognition by this Court,’” the petition stated.

Moreover, the U.S. government also argued that not striking down the SB 54 provisions has “significant real-world consequences.” The court of appeal had acknowledged that SB 54 requires federal officers to stake out a jail in order to try to make a public arrest, which presents risks to the arresting officer and general public.

“When officers are unable to arrest aliens—often criminal aliens—who are in removal proceedings or have been ordered removed from the United States, those aliens instead return to the community, where criminal aliens are disproportionately likely to commit crimes,” the government argued.

The Ninth Circuit U.S. Circuit Court of Appeals upheld the SB 54 provisions in their decision in April 2019 (pdf). The three-judge panel rejected the government’s arguments for striking down the provisions, ruling that the 10th amendment anti-commandeering doctrine applies. The doctrine prescribes that the federal government from forcing states or local governments to enforce federal policies.

Along with SB 54, the lawsuit had also asked the court to grant a preliminary injunction for two other California laws. One law required employers to alert employees before federal immigration inspections, while the other imposes inspection requirements on facilities that hold civil immigration detainees. The lower courts held that those provisions were likely invalid, according to the petition.

In response to the Trump administration’s petition, Californian officials argued that it was not necessary to review the lower court’s decision because the federal law does not stop states from defining circumstances where state and local officials may use state resources to participate in the enforcement of federal immigration law.

They argued that SB 54 only limits cooperation with federal immigration officials and does not obstruct them in their work.

“To be sure, petitioner would prefer that States and localities provide immigration authorities with any assistance requested by the federal government,” they argued (pdf). “But especially where Congress contemplated the possibility of voluntary state and local aid but did not purport to mandate it, a State does not intrude on federal prerogatives by volunteering help in some circumstances but not in others.”

Californian officials also argued that the Trump administration would exceed their federal power if they prevent states from limiting state and local participation in federal immigration enforcement activities, citing principles from the Tenth Amendment of the Constitution, which says the federal government may not compel state officials to enforce or administer federal policies.

In another brief (pdf) on Jan. 2, the Trump administration disputed some of California’s arguments, saying that the state’s position “misunderstands both federal immigration law and the Tenth Amendment.”

The Justice Department did not immediately respond to The Epoch Times’ request to comment.