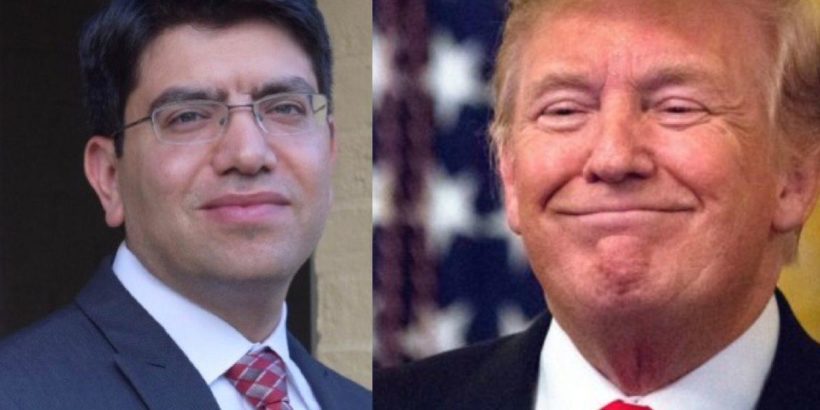 President Trump is one of the most peaceful presidents ever. He uses his amazing negotiation abilities to get what he wants without going to war and creating endless conflicts around the globe.

President Trump is one of the most peaceful presidents ever. He uses his amazing negotiation abilities to get what he wants without going to war and creating endless conflicts around the globe.

Of course, we have a vengeful, biased and hysterical media so he doesn’t get the credit he deserves.

Look at the success President Trump achieved with North Korea…He brought a “madman” to the table to talk about peace and prosperity.

The left and fake news media hate Trump so much, they’d rather watch America fail than give Trump credit for anything.

But that’s okay, we don’t need their worthless validation.

Because other people who actually matter do notice Trump’s peaceful accomplishments and want him to receive the credit he so richly deserves.

One of those groups is an American-Syrian movement led by Dr. Tarek Kteleh, from Indiana.

He’s the board member of a group that promotes national security issues in Syria, called “Citizens for a Secure and Safe America,” and he is leading the charge to nominate President Trump for the Nobel Peace Prize.

Dr. Kteleh wants Trump nominated for his successful efforts to convince President Putin to scale back on his plan to seize the Syrian refugee city of Idlib.

He says Trump thwarted an attack that could have killed 3 million people.

A Syrian American doctor is spearheading an initiative to nominate President Trump for a Noble Peace Prize after Trump managed to convince Putin to throttle back on plans to seize the Syrian refugee city of Idlib in 2018, an attack that could have potentially killed upwards of 3 million civilians.

Dr. Tarek Kteleh, a rheumatologist in Indiana and board member of a group that promotes national security issues in Syria called Citizens for a Secure and Safe America, told Fox News Thursday that Trump “deserves credit” for preventing the potentially deadly attack on one of the last remaining cities not under the control of Syrian dictator Bashar al-Assad.

The Syrian military and their Russian and Iranian allies surrounded Idlib, a sanctuary city that nearly 4 million civilians fled to, ready to attack and push out the Syrian rebels by the end of summer 2018. The small province of land was a necessary stronghold for rebel forces, vital to preventing the dictator from accessing control of the Northern portion of the Middle East.

Kteleh and president of their group, Dr. Rim Al-Bezem, a cardiologist from New Jersey, met Trump at a fundraiser in Indiana specifically with the intention of bringing attention to the plight in Syria.

Al-Bezem explained to Trump the potential slaughter of innocent lives, almost a quarter of whom were children and Trump assured them that he was “not going to let this happen,” Kteleh told Fox News.

Kteleh admits he was skeptical that Trump would take action, instead believing he was trying to appease himself and Al-Bezem, both of whom had families living in Idlib at the time. [Fox News]

It’s time to bring credibility back to the Nobel Peace Prize. When Obama was essentially “gifted” the coveted award, it diminished the Peace Prize, and turned it into a PR tool.

Obama was awarded the prize in 2009 for his “extraordinary efforts to strengthen international diplomacy and cooperation between people.”

Obama turned out to be a foreign policy nightmare on so many fronts. From Benghazi to “Fast and Furious” to “JV Team ISIS” to the Arab Spring, he was a mess and totally out of his element.

Obama’s win diminished the value of the Nobel Peace Prize – and it didn’t help this year, when teenage climate kook Greta Thunberg was nominated. Thank goodness she didn’t win.