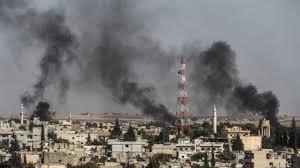 Amid claims that Turkey is committing “war crimes” in northern Syria, President Donald Trump on Sunday said that he’s considering “powerful sanctions” as a solution.

The president said he is speaking with Sen. Lindsey Graham (R-S.C.) and others in Congress about sanctioning Turkey. The U.S. Treasury “is ready to go” on the sanctions while “additional legislation may be sought. There is great consensus on this. Turkey has asked that it not be done. Stay tuned!”

In an earlier tweet, he said that Turkey and the Kurds have been fighting for a considerable amount of time, saying that Turkey considers the Kurdistan Worker’s Party, or PKK, to be the “worst terrorists of all.”

“Others may want to come in and fight for one side or the other. Let them! We are monitoring the situation closely. Endless Wars!” he tweeted.

The series of comments came after Defense Secretary Mark Esper noted that Turkey may be committing war crimes in the region.

“It appears to be,” Esper agreed on CBS’s “Face the Nation” Sunday when host Margaret Brennan asked about whether its conduct against Kurdish forces constitutes a war crime.

“It’s a very terrible situation over there, a situation caused by the Turks. Despite our opposition, they decided to make this incursion,” Esper said.

Esper also confirmed that about 1,000 U.S. soldiers would be withdrawn from northern Syria.

“Turkey committed this action despite our protestations, all of our warnings,” Esper added. “We are doing what’s in the interest of our service members not to put them in harm’s way.”

On Saturday, the White House announced the United States will send $50 million in stabilization assistance to Syria.

“We hope regional and international partners will continue their contributions as well,” the statement continued. “Ensuring the freedom and safety of ethnic and religious minorities remains a top priority for this Administration.”

“After we launched our operation, we have faced threats like economic sanctions and embargoes on weapons sales. Those who think they can make Turkey turn back with these threats are gravely mistaken,” Erdogan said in a televised speech via Al Jazeera.

On Thursday, France and Germany announced the embargoes to Turkey.