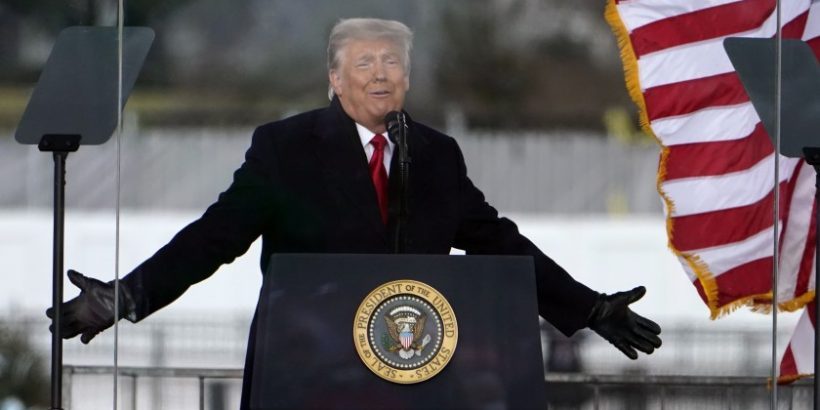 Former President Donald Trump’s second impeachment trial is set to kick off in the Senate on Tuesday, with Democrat prosecutors alleging Trump incited an insurrection and committed the “most grievous constitutional crime,” while lawyers for the former president have dismissed the trial as “political theater.”

With senators gathered as the court of impeachment, the trial will begin Tuesday with a debate and vote on whether it’s constitutionally permissible to prosecute the former president.

Under an agreement between Senate Majority Leader Chuck Schumer (D-N.Y.) and Republican leader Mitch McConnell (R-Ky.), the opening arguments will begin at noon Wednesday, with up to 16 hours per side for presentations.

After that, there are hours for deliberations, witnesses, and closing arguments. No witnesses are expected to be called at the trial and Trump has declined a request to testify. The trial was set to break Friday evening for the Jewish Sabbath, but Trump’s defense team withdrew the request, and now the trial can continue into the weekend and next week.

As the trial opens, Trump’s lawyers insist in filings that Trump is not guilty on the sole charge of “incitement of insurrection,” calling his rhetoric in a speech on Jan. 6—the day a crowd breached the Capitol—a mere figure of speech.

“Trump used the word ‘fight’ a little more than a handful of times and each time in the figurative sense that has long been accepted in public discourse when urging people to stand and use their voices to be heard on matters important to them; it was not and could not be construed to encourage acts of violence,” they argued in the filing.

While Trump said in his Jan. 6 speech that “we fight like hell and if you don’t fight like hell, you’re not going to have a country anymore,” the former president called on supporters to “peacefully and patriotically” make their voices heard during the joint session of Congress and later denounced the day’s violence.

Trump’s lawyers also contend that the incitement of insurrection charge against Trump is not rooted in fact.

Further, the lawyers argued that the trial is unconstitutional as Trump is no longer in office.

“The Senate is being asked to do something patently ridiculous: try a private citizen in a process that is designed to remove him from an office that he no longer holds,” the wrote.

House impeachment managers, in their own filings, argued that the trial is constitutional, claiming that Trump had “betrayed the American people” and there is “no valid excuse or defense for his actions.”

“His incitement of insurrection against the United States government—which disrupted the peaceful transfer of power—is the most grievous constitutional crime ever committed by a president,” the Democrats said.

The Democrat impeachment managers also pushed back against the argument that Trump was exercising his First Amendment rights.

“The House did not impeach President Trump because he expressed an unpopular political opinion. It impeached him because he wilfully incited violent insurrection against the government,” they argued.

Last month, the House voted 232–197, including 10 Republicans, to impeach Trump on the sole charge of inciting an insurrection.

Trump’s acquittal in the Senate, however, is near certain as 17 Republicans would have to join all Democrats in voting to convict.

According to a tally by The Epoch Times, 35 Republican senators have suggested or committed to voting to acquit Trump.

“The trial is already over. They don’t have the votes to convict,” Sen. Rand Paul (R-Ky.) told reporters on Feb. 4. “This is just, I think, continuing to embitter the public. It’s divisive, and it does nothing to promote unity. I think it’s a big mistake on the Democrats’ part.”

If Trump were to be convicted, the Senate could hold a subsequent vote to bar him from ever holding office again. Unlike an impeachment conviction, which requires two-thirds of the Senate to be adopted, only a simple majority would be required to ban Trump from future office.