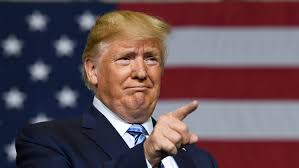 President Donald Trump has increased his criticism of the Democrats’ impeachment inquiry, comparing the process to a “coup.”

“As I learn more and more each day, I am coming to the conclusion that what is taking place is not an impeachment, it is a COUP,” Trump wrote on Twitter on Tuesday, Oct. 1.

The president wrote that the investigation into his alleged abuse of power is “intended to take away the Power of the People, their VOTE, their Freedoms, their Second Amendment, Religion, Military, Border Wall, and their God-given rights as a Citizen of The United States of America!”

House Democrats last week formally launched an impeachment inquiry against Trump in the wake of a call with the Ukrainian president in which Trump asked the foreign leader to investigate Democratic presidential candidate Joe Biden and his son, Hunter Biden.

The White House last week released a transcript of the July 25 call between Trump and Ukrainian President Volodymyr Zelensky, during which Trump appeared to refer to a video in which Biden brags about forcing the firing of a Ukrainian prosecutor by withholding $1 billion in U.S. loans. At the time of the firing, the prosecutor was investigating Burisma, the Ukrainian natural gas firm that paid Hunter Biden $50,000 per month as a member of the board of directors. The prosecutor, Viktor Shokin, told a European court in a sworn affidavit that he was removed because he refused to drop the Biden investigation.

A whistleblower complaint made public last Thursday claims that Trump’s request that Ukrainian authorities “look into” alleged misconduct by the Bidens amounts to abusing his office for political gain. The Democrats, in pressing ahead with the impeachment inquiry, have adopted the reasoning that Trump’s call for an investigation amounted to abuse of power.

The Department of Justice, meanwhile, has reviewed the allegations in the whistleblower complaint and determined no further action is necessary.

Democrats have indicated they are prepared to move quickly toward impeachment.

Earlier, Trump said that “almost everything” the whistleblower said about his call with Ukraine’s president was off the mark and called accusations of abuse of power “just another Democrat hoax.”

“So if the so-called ‘Whistleblower’ has all second-hand information, and almost everything he has said about my ‘perfect’ call with the Ukrainian President is wrong (much to the embarrassment of Pelosi & Schiff), why aren’t we entitled to interview & learn everything about the Whistleblower, and also the person who gave all of the false information to him,” Trump said in a statement on Twitter on Oct. 1.

“This is simply about a phone conversation that could not have been nicer, warmer, or better. No pressure at all (as confirmed by Ukrainian Pres.). It is just another Democrat Hoax!”

Trump has repeatedly sought to link the current impeachment inquiry to the years-long probe of the Russia-Trump collusion theory, which concluded earlier this year when special counsel Robert Mueller’s team said it could not establish cooperation or conspiracy between Trump or his campaign and Russian actors.

The president has labeled both inquiries as “witch hunts.”

ICIG Admits to Changing Whistleblower Form Due to Media Scrutiny

The whistleblower who triggered the impeachment inquiry filed his or her complaint with the Office of the Intelligence Community Inspector General (ICIG) on Aug. 12. The complaint consists almost entirely of secondhand accounts, media reports, and other publicly available information. Trump and Republicans have focused on that point to cast doubt on the credibility of the whistleblower.

The ICIG admitted on Sept. 30 that media scrutiny contributed to its decision to make a significant change to the whistleblower form tied to the complaint.

A detailed statement was issued by the ICIG addressing questions about why the office removed language from a whistleblower form that advises complainants that their requests wouldn’t be forwarded to Congress unless they provided firsthand information.

“In the process of reviewing and clarifying those forms, and in response to recent press inquiries regarding the instant whistleblower complaint, the ICIG understood that certain language in those forms and, more specifically, the informational materials accompanying the forms, could be read—incorrectly—as suggesting that whistleblowers must possess firsthand information in order to file an urgent concern complaint with the congressional intelligence committees.”

The older version of the form features a section in the instructions entitled, “First Hand Information Required,” which advises complainants that “the ICIG must be in possession of reliable, firsthand information” in order to process the complaint, in accordance with the Intelligence Community Whistleblower Protection Act (ICWPA).

“If you think wrongdoing took place, but can provide nothing more than secondhand or unsubstantiated assertions, ICIG will not be able to process the complaint or information for submission as an ICWPA,” the old version of the form stated.

The ICIG clarified in its Sept. 30 statement that the office’s review determined that the whistleblower had “direct knowledge of certain alleged conduct.” The ICIG didn’t respond to a request to clarify which “alleged conduct” the statement refers to.