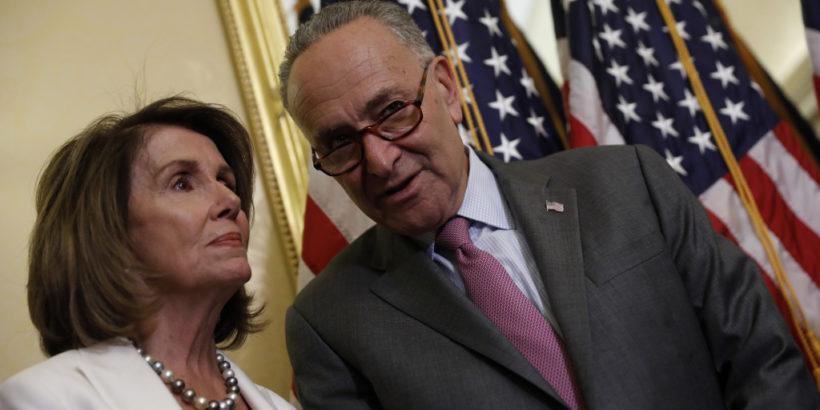 House Speaker Nancy Pelosi (D-Calif.) and Senate Minority Leader Chuck Schumer (D-N.Y.) signaled that they are open to increasing the amount for the stimulus checks after President Donald Trump threatened to veto the COVID relief bill unless the direct payment was increased to $2,000 per individual.

“Republicans repeatedly refused to say what amount the President wanted for direct checks. At last, the President has agreed to $2,000—Democrats are ready to bring this to the Floor this week by unanimous consent. Let’s do it!” Pelosi wrote on Twitter on Tuesday.

“We spent months trying to secure $2,000 checks but Republicans blocked it. Trump needs to sign the bill to help people and keep the government open and we’re glad to pass more aid Americans need. Maybe Trump can finally make himself useful and get Republicans not to block it again,” Schumer wrote on Twitter shortly after Pelosi issued her message.

In a video message issued earlier on Tuesday, the president threatened to veto the $2.3 trillion omnibus spending and pandemic relief bill.

“Congress found plenty of money for foreign countries, lobbyists, and special interests,” the president said, “while sending the bare minimum to the American people who need it.”

“It wasn’t their fault. It was China’s fault.”

Trump said that lawmakers need to send him a suitable piece of legislation by his standards—or else the next administration will have to sign off on the measure.

“And maybe that administration will be me,” he added.

The president pointed to hundreds of millions of dollars tagged for the Egyptian military, Cambodia, Burma, “gender programs” in Pakistan, and numerous other countries. These provisions were also singled out by progressives and conservatives alike as an example of pork-barrel spending.

On Monday night, a number of lawmakers griped that they didn’t have enough time to look through the approximately 5,500-page bill (pdf).

Trump also noted that tens of millions of dollars are going to the Kennedy Center in Washington D.C. “which is not even open for business,” as well as the National Gallery of Arts and the Smithsonian.

Other non-pandemic measures were included, such as combatting the spread of Asian carp in the Great Lakes area, construction projects at the FBI, and others.

The president said he would also veto the bill because stimulus payments are being doled out to “illegal aliens” and their families.

“Despite all of this wasteful spending, the $900 billion package provides hardworking taxpayers only $600 [to Americans] in relief payments,” he said, arguing that not enough cash is being provided to small business owners who have suffered during the pandemic induced lockdowns.