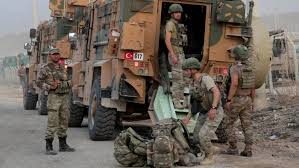 The delegation will seek to “achieve a deal” in the coming days to end the full-scale battle that erupted when Turkish president Recep Tayyip Erdogan permitted his forces to invade Syria following an announcement by President Donald Trump that he is removing American forces from the region.

The troop withdrawal, which has been criticized by both Republican and Democratic leaders, set the stage for a renewed wave of violence in Syria that U.S. officials say has threatened to erase American gains in defeating ISIS terrorists.

The Turkish incursion into Syria “has upturned one of the real success stories” of the U.S.-led coalition to defeat ISIS, according to one senior administration official who briefed reporters on the latest developments early Monday evening. “These are crucial diplomatic and security interests for us and the region.”

The United States has now been left to “restore the situation as best we can,” the officials said.

The U.S. delegation being sent to Ankara is a sign the Trump administration recognizes that it is “the only party with the gravitas to arbitrate with both sides,” according to a second senior administration official, who also spoke only on background about the still developing response.

“Erdogan refused to listen to our repeated warnings” about what would happen if he moved his military forces into Syria, according to a third senior administration official who briefed reporters.

The situation has gotten out of hand, the officials said. In addition to ISIS being rejuvenated, the incursion has interfered with American efforts to isolate Iranian forces in the region and stop them from bolstering Syrian strongman Bashar al-Assad, who has been sheltered by top Iranian commanders on the ground.

On Monday afternoon, Trump made good on his repeated promises to economically penalize Turkey for its bloody invasion.

The United States halted all negotiations with Turkey surrounding a $100 billion trade deal, officials confirmed, and issued a bevy of new sanctions on current and former Turkish officials. Tariffs were also brought up to 50 percent.

Secretary of State Mike Pompeo said sanctions would bite Turkey if it does not go along with U.S. efforts to negotiate a ceasefire.

“Trump has now signed an executive order to press Turkey to halt its military offensive against northeast Syria and adopt an immediate ceasefire,” Pompeo said in a statement. “The executive order gives the Department of Treasury and the Department of State, the authority to consider and impose sanctions on individuals, entities, or associates of the government of Turkey involved in actions that endanger civilians or lead to the further deterioration of peace, security, and stability in northeast Syria. Three senior Turkish officials, the ministry of energy, and the ministry of defense have been designated for sanctions under these authorities, concurrent with the signing of the executive order.”

“Turkey’s actions in northeast Syria severely undermine the [Defeat]-ISIS campaign, endanger civilians, and threaten the security of the entire region,” Pompeo said. “If Turkey’s operation continues, it will exacerbate a growing and daunting humanitarian crisis, with potentially disastrous consequences.”

In a letter sent Monday afternoon to both the House of Representatives and the Senate, Trump declared a “national emergency” due to the situation in Syria.

“I have taken this action because recent actions by the government of Turkey undermine the campaign to defeat the Islamic State of Iraq and Syria, or ISIS, endangers civilians, and further threatens to undermine the peace, security, and stability in the region, and thereby constitute an unusual and extraordinary threat to the national security and foreign policy of the United States,” Trump said in his letter. “I have also announced that steel tariffs will be increased back up to 50 percent, the level prior to reduction in May.