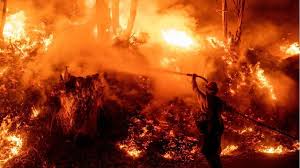 Trump Warns California on Wildfires: ‘Get Your Act Together’

President Donald Trump renewed his threat to cut off federal aid to California as numerous wildfires raged across the state, telling Gov. Gavin Newsom, a Democrat, to improve the state’s forest management.

“The Governor of California, Gavin Newsom, has done a terrible job of forest management. I told him from the first day we met that he must ‘clean’ his forest floors regardless of what his bosses, the environmentalists, DEMAND of him. Must also do burns and cut fire stoppers,” Trump wrote on Twitter on Sunday.

“Every year, as the fire’s [sic] rage [and] California burns, it is the same thing—and then he comes to the Federal Government for $$$ help. No more. Get your act together Governor. You don’t see close to the level of burn in other states,” he continued.

What’s more, he said, federal workers are working together to put out the wildfires in the state.

“Great firefighters! Also, open up the ridiculously closed water lanes coming down from the North. Don’t pour it out into the Pacific Ocean. Should be done immediately. California desperately needs water, and you can have it now!” he added.

Several wildfires are currently burning in both Northern and Southern California.

The Kincade Fire, for example, is the largest active fire in the state, burning more than 77,000 acres since it started last month. It’s now about 74 percent contained, according to a map from the Los Angeles Times.

“The most recent fire is the Sobrante fire, which started on Nov. 1. It is 0 percent contained and has burned 35 acres so far,” the L.A. Times noted.

Firefighters in Ventura County said that the Maria Fire is only about 30 percent contained after burning about 15 square miles, CBS News reported. All evacuation orders were lifted on Saturday afternoon.

Meanwhile, in Northern California, residents cannot enter the area of the Kincade Fire to clean their property after an order was handed down by officials in Sonoma County.

“The burnt remains of building materials, such as siding, roofing tiles and insulation results in dangerous ash that may contain asbestos, heavy metals and other materials that are hazardous to health,” according to a news release from Dr. Celeste Philip, the County’s health officer, CBS also reported.