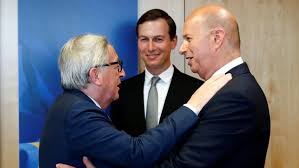 An attorney for Ambassador Gordon Sondland says the State Department has directed Sondland not to appear for his scheduled interview before a joint House committee taking depositions in the impeachment probe of President Donald Trump.

Sondland had previously agreed to appear voluntarily Tuesday to answer the committee’s questions in a closed session. He would have been the second current or former State Department to testify, following former U.S. special envoy to Ukraine Kurt Volker.

Sondland’s attorney Robert Luskin said that as the sitting U.S. ambassador to the European Union and an employee of the State Department, Sondland is required to follow the department’s direction. No reason for the direction was cited, he said.

Luskin said Sondland “is profoundly disappointed that he will not be able to testify.”

Sondland “believes strongly that he acted at all times in the best interests of the United States,” the attorney added.

Luskin is also representing Stefan Halper, who spied on the Trump campaign, in a defamation lawsuit that was filed by Svetlana Lokhova, a historian.

The State Department has not confirmed Luskin’s account of the situation with Sondland. Trump later Tuesday said he wanted Sondland to testify.

“I would love to send Ambassador Sondland, a really good man and great American, to testify, but unfortunately he would be testifying before a totally compromised kangaroo court, where Republican’s rights have been taken away, and true facts are not allowed out for the public to see,” he said in a statement.

Messages between Sondland and another ambassador were released along with other selected messages last week by House Democrats, who argued that the messages “reflect serious concerns by a State Department official about the detrimental effects of withholding critical military assistance from Ukraine and the importance of setting up a meeting between President Trump and the Ukrainian president without further delay.”

Trump asked Ukrainian President Volodymyr Zelensky in July to look into CrowdStrike, a technology firm hired by the Democratic National Committee after the committee suffered a security breach. Trump also asked Zelensky to probe the past actions of former Vice President Joe Biden and his son Hunter Biden, who served on the board of the energy company Burisma from 2014 to 2019.

Joe Biden admitted last year that he threatened to withhold $1 billion in aid to Ukraine in 2016 unless then-President Petro Poroshenko ousted a prosecutor who was probing Ukraine.

Trump said he has the right to ask other countries to help probe corruption and said the requests for help have nothing to do with the 2020 campaign. Joe Biden is a Democratic presidential contender.

In one set of messages, Volker told Sondland several days later that he wanted special attention paid to the interference in the 2016 U.S. elections, including the alleged involvement of some Ukrainian politicians.

In another set of messages, Ambassador Bill Taylor and Sondland disagreed over the negotiations with Ukraine.

“The message to the Ukrainians (and Russians) we send with the decision on security assistance is key,” Taylor wrote on Aug. 9. “With the hold [of military aid], we have already shaken their faith in us. Thus my nightmare scenario.”

Sondland said he never said he was “right” about the situation, adding: “I said we are where we are and I believe we have identified the best pathway forward. Let’s hope it works.”

“As I said on the phone, I think it’s crazy to withhold security assistance for help with a political campaign,” Taylor replied.

“Bill, I believe you are incorrect about President Trump’s intentions. The president has been crystal clear, no quid pro quos of any kind,” Sondland told Taylor.

“The president is trying to evaluate whether Ukraine is truly going to adopt the transparency and reforms that President Zelensky promised during his campaign. I suggest we stop the back and forth by text.”