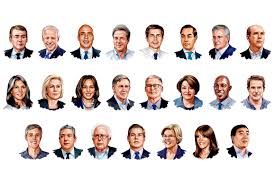 The intelligence community inspector general testified Friday to congressional investigators that the so-called “whistleblower” who mischaracterized President Donald Trump’s call with the leader of Ukraine had a previous “professional relationship” with a 2020 Democrat candidate, according to the Washington Examiner.

“The IG said [the whistleblower] worked or had some type of professional relationship with one of the Democratic candidates,” one person with knowledge of inspector general Michael Atkinson’s testimony told the Examiner’s Byron York.

In another conversation with York, a second source revealed: “What [Atkinson] said was that the whistleblower self-disclosed that he was a registered Democrat

‘Whistleblower’ Had ‘Professional Relationship’ with 2020 Democrat

and that he had a prior working relationship with a current 2020 Democratic presidential candidate.”

According to York, Atkinson did not reveal the Democrat presidential candidate’s identity or touch on the nature of the working relationship.

The Examiner’s report raises further questions about the so-called “whistleblower” and his complaint, which alleges President Donald Trump pressured Ukrainian President Volodymyr Zelensky to investigate allegations of corruption against former Vice President and 2020 White House hopeful Joe Biden and his son, Hunter Biden. In an August 26th letter, Atkinson said the officer was found to have harbored “political bias” in favor of a rival political candidate to President Trump. York’s report contradicts a claim by CNN anchor Jake Tapper, who stated last week that the so-called “whistleblower’s” political bias was that he was a “registered Democrat.”

The officer’s alleged political bias isn’t the only glaring issue with his complaint. Last week, Fox News reported the anonymous Deep Stater concealed his communications with a House Intelligence Committee aide from Atkinson, who told lawmakers he possessed “no knowledge” of the officer’s contacts with the Capitol Hill staffer. As Breitbart News reported, the development suggests the officer failed to follow the law for protecting intelligence community members seeking to report alleged wrongdoing.

The Trump-Zelensky call sparked House Democrats to launch a so-called impeachment inquiry into the president — despite the fact that the two have both denied any pressure was applied to investigate the Biden family. In a nod to transparency, the White House released a transcript of the call to illustrate no wrongdoing took place.

” I think you read everything. I think you read text. I’m sorry, but I don’t want to be involved to democratic open elections, elections of USA. No, sure, we had I think good phone call. It was normal. We spoke about many things, and I — so I think and you read it that nobody pushed me,” Zelensky told reporters at the United Nations earlier this month.

However, questions still remain about Hunter Biden’s business dealings in Ukraine and China and whether he benefited personally while his father was vice president. As Breitbart News reported, Hunter Biden’s investment firm secured a $1.5 billion investment deal with the Bank of China after traveling with his father on Air Force Two to the country in 2013. In regard to Ukraine, Hunter Biden was paid $83,000 per month as a board member of the gas giant Burisma Holdings, despite having little-to-no expertise in the energy sector. The vice president forced out former Ukrainian prosecutor Viktor Shokin as he was investigating Burisma Holdings and even bragged about threatening to withhold $1 billion in aid to Ukraine unless he was fired.

“China should start an investigation into the Bidens, because what happened in China is just about as bad as Ukraine,” the president said ahead of a visit to Florida to deliver remarks on Medicare.

“I would think that if they were honest about it, they would start a major investigation,” he added. “Nobody has any doubt that they weren’t crooked; that was a crooked deal, 100 percent.”