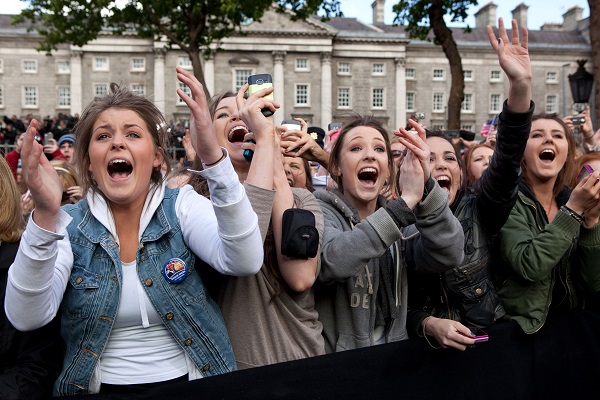 When last Thursday night Joe Biden told America, “Donald Trump and the MAGA Republicans” “threaten the very foundation of our republic,” he missed the mark.  The real threat comes from the unlikeliest of suspects: educated liberal females, or “ELFs” for short.

These are the women who will proudly vote Democrat regardless of soaring inflation, rising gas prices, rampant crime in the streets, the unchecked flood of illegal aliens, and oppressive COVID policies that have irreparably damaged all children, the poor most notably.

If NBC’s polling from April is to be believed, this is the only demographic cohort more favorably inclined to Democrats in 2022 than in 2018.  Unable to sell these women on his accomplishments — there are none — Biden last week appealed to their paranoia.  What made this pitch strategic is his target audience’s proven susceptibility to fear-based propaganda.

At the core of the ELFs’ vulnerability is their ignorance, if not at the top, certainly among the masses.  This should not surprise.  Everywhere and always, men have performed better on political knowledge tests than women (just as conservatives routinely outperform liberals and independents).  Researchers exploring this particular gender gap long ago gave up on questioning whether this was true and have focused instead on why.

Avoiding the obvious answer — namely, that men and women, being different, have different interests — researchers have spent millions of your tax dollars on the improbable and irrelevant.  Among the more popular hypotheses is that women are more risk-averse than men and thus, on tests, are less likely to “guess under conditions of uncertainty.”  For some reason, it is more acceptable to stereotype women as “risk-averse” than as “politics-adverse.”  In fact, women, writ large, are likely both.

A survey of 10,000 individuals across ten nations by the Economic and Social Research Council (ESRC) offers a more sobering analysis.  What most surprised researcher James Curran of the University of London was that “gaps in political knowledge are wider in countries that have done the most to promote gender equality.”  Curran noted that women’s scores in the U.K., the U.S., and Canada were more than 30 percent lower on average than men’s, a significantly greater gender gap than in Greece, Italy, and Korea.

The ESRC data suggest that formal education may actually increase the knowledge gap between men and women.  There are reasons why this is so.  Historically, married women have tended to vote more conservatively than their unmarried peers.  Spousal influence plays a role in their voting, but so does the added awareness of real issues that comes with raising a family and owning a home.

Today, however, more than a third of college-educated women are childless.  Then, too, marriage rates among the educated continue to decline as they have over the past 40 years while the age of first marriage continues to increase.  In 2021, the average age for a female’s first marriage was 28.6, roughly nine years more than 60 years prior.

In the not too distant past, women attended college with the expectation of finding a spouse.  Today, they would have much better luck hanging out at a construction site.  As late as 1970, there were five men for every four women in America’s four-year colleges.  By the fall of 2021, there were almost two women for every man.

Once in college, the progressive grooming that began discreetly in high school now publicly and proudly moves to center stage.  A study of faculty voter registration at 40 leading U.S. universities showed a more than ten-to-one ratio of Democrats to Republicans with the numbers skewing higher in liberal arts and among young faculty.  In some fields, there are no Republicans at all.

Lacking a male counterpoint in their lives and often majoring in subjects with a social justice agenda, college women enter the political arena not so much uninformed as misinformed.  Given that communications/journalism faculty members skew 20 to 1 Democrat, the media these young ELFs consume will only reinforce the biases nurtured in college.

The ELFs fail to see how they have been propagandized.  They read the New York Times and other establishment media, thinking them gospel.  Those ELFs less keen on reading rely on media outlets even more biased than the Times.  As to friends and family who offer alternative points of view, there is the knee-jerk fallback, “Where did you hear that?  Fox News?”  ELFs don’t want to know about the border crisis or the recession or Hunter’s laptop, and their media oblige them.  If their social media allow alternative voices to bleed through, the ELFs are the first to demand that those voices be silenced.

The danger that ELFs pose to constitutional government became all too evident in the Black Swan year of 2020.  With the onset of COVID, ELFs quickly found themselves in the grip of what Belgian  psychologist Dr. Mattias Desmet calls “mass formation psychosis.”  Writes Desmet in his surprise bestseller, The Psychology of Totalitarianism, “It is, in essence. a kind of group hypnosis that destroys individuals’ ethical self-awareness and robs them of their ability to think critically.”

Devoid of ethical self-awareness, it was the ELFs that emerged as our “Karens.”  What made them truly annoying was their belief, given their education, that they knew more than the people they were hectoring.  They didn’t.  If proof were needed, a study of 35,000 U.S. adults by Franklin Templeton-Gallup revealed that a shocking 41 percent of Democrats believed that 50 percent or more of those who contracted COVID ended up in the hospital.  The correct answer was 1–5 percent.

Through their control of the teachers’ unions, ELFs have outsized influence on Democrat party politics.  Deeply misinformed about COVID’s impact, ELFs used their influence to lock down schools as long as they possibly could.  Schoolkids, especially the less affluent, will never recover.

In her essential book, The Bodies of Others, Naomi Wolf reveals how her “affluent, liberal ‘tribe'” behaved during the COVID years.  It wasn’t pretty.  These “new authoritarians” resisted information outside approved channels and smugly oppressed the “working people” who dared question the orthodoxy du jour.  Wolf documents in lived experience what Desmet describes as a “profound intolerance of dissident voices and pronounced susceptibility to pseudo-scientific indoctrination and propaganda.”

In May 2020, as the joke goes, people had to take down their COVID decorations to prepare for George Floyd season.  My office in Kansas City overlooked the staging area for the “largely peaceful protests” that would ravage our city.  On that first day, I watched young men with out-of-state license plates unload heavy backpacks from their cars.  They knew what they were doing.

The ELFs didn’t have a clue.  That evening, driving home, I passed the park where the protesters were gathering.  To my surprise, the crowd was overwhelmingly white and female.  The unintentional death of a chronic felon at the hands of four police officers of three different races in a progressive city in a Democrat state was indicative of nothing.  George Floyd did, however, cry out “mama” at the end, and that was prompting enough for the ELFs to get swept up in one more self-destructive mania.

The men would do most of the damage in the streets — $2 billion of it nationwide — but the ELFs would do the lasting damage to our institutions.  Those with access to Fox Nation would do well to watch Tucker Carlson’s interview with Nicole Levitt, a liberal family law attorney in Philadelphia.  In the immediate wake of Floyd’s death, her organization, like others everywhere, showed its commitment to social justice by creating what Levitt calls “a racially hostile work environment permeated with discriminatory insults and stereotypes.”

Levitt had the courage to blow the whistle on this Maoist nonsense.  None of her colleagues would back her.

Women may, in fact, be as risk-averse as researchers suggest.  How else to explain, for example, the silence of so many female Ivy League swimmers forced to compete against a male?  Here too, “pseudo-scientific indoctrination and propaganda” overwhelmed common sense.  And this is just one recent mania out of many.

In November, Biden needs the ELFs to vote en masse.  This will happen only if they remain ignorant of the things that should worry them — the border, crime, inflation — and scared silly of things that need not.  Something tells me that the producers of Biden’s Nuremberg-style spectacle knew what they were doing.