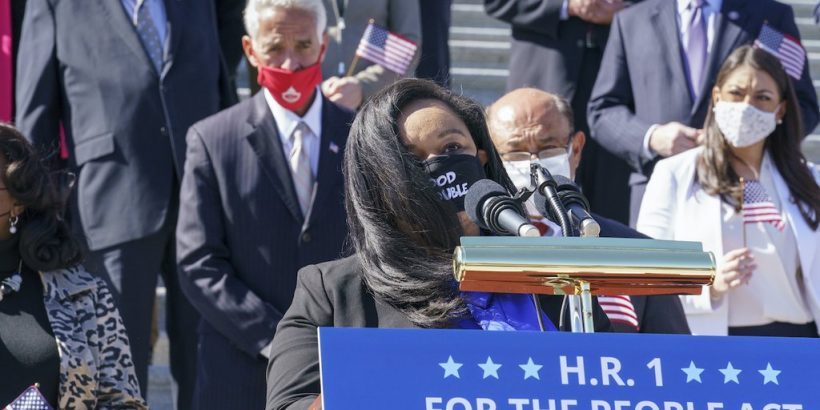 If you’ve ever read Lord of the Flies, The Rise and the Fall of the Third Reich, or 1984, you understand the threat to life and limb from unrestrained power. Lord Acton distilled the danger down to a simple phrase: “Absolute power corrupts absolutely.” Our Founding Fathers knew that which is why they crafted for us the Constitution, the greatest document ever written by men. With H.R. 1, the Democrats will destroy our rights under that document.

The Founders built into the Constitution a variety of checks and balances on government as a whole and its branch of government to ensure they never accumulated too much power. They gave us the Connecticut Compromise, which balanced representation between large and small states, with two Senators elected from each state and Congressmen being elected based on population; the Legislature, which passes laws, and the Executive, which implements them; and the hugely significant Massachusetts Compromise, which created the ultimate check on government power, the Bill of Rights, which explicitly articulated individual rights upon which the government could not infringe.

Finally, in what was likely the most groundbreaking element of any constitution ever written, the Founding Fathers explicitly limited the government’s powers with the 9th and 10th Amendments. The former stated that the Constitution’s enumeration of certain rights did not preclude the existence of others not addressed, while the latter stated that the federal government had only those powers given and any not given to it were reserved for states or the people.

Extraordinary students of history and men, Madison, Adams, Franklin, et al., understood man’s nature and built a Constitution specifically crafted to counter that nature. It wasn’t a perfect document — and had a tool for addressing imperfections built into it — but it largely worked well for 233 years and allowed the United States to develop into the strongest and most powerful nation in the history of mankind.

Specifically, the Founder’s Constitution worked because – by design – it was insulated from men’s passions. The Senate’s staggered six-year terms balanced the House’s biennial elections – and, originally, the states appointed Senators while the people elected Congressmen. Presidents were elected every four years and Justices were appointed for life. For each office, the Constitution explicitly limited their powers.

Incredibly, while the Founders knew nothing about cars, televisions, mobile phones, or the Internet, the mechanisms they put in place largely survived Time’s march. But for all of their familiarity with the dark sides of man’s nature, even the Founding Fathers, possibly the greatest assembly of men to ever come together in history, couldn’t foresee the darkness that lay ahead with the Democrat party of the 21st century.

Today, America sits and watches as Democrats essentially send the Constitution through the shredder. Emboldened by a pusillanimous Supreme Court, Democrats with H.R. 1, seek to undermine the Constitution’s very foundation: Voting integrity by the governed. They seek to codify arrangements that, by their very nature, are intended to eviscerate the notion of vote integrity.

These anti-integrity initiatives, and many more, will be codified under H.R. 1, with the goal of giving Democrats end-to-end control over voting in the United States. Once they achieve this, they will control every branch and every element of the federal government in perpetuity. And given that they back a regulatory state that never met a freedom it didn’t want to regulate, they will control every aspect of the lives of formerly free Americans.

And that will be the end of America as we know it. Entrepreneurial innovation? Gone unless the mission furthers the green or “justice” themes of Democrats. Educational freedom? Access to and success within will be predicated on a willingness to muzzle any thoughts or words that fall outside of whatever is currently deemed acceptable. Virtually everything, from sports to medicine to science to literature to media to the Internet to your very job will become nothing more than a vehicle for establishing people’s acquiescence to the left’s diktats, whether the Democrats regulate them directly or they come indirectly from their fellow travelers embedded in academia, the media and increasingly, big business.

For more than two centuries, Americans suffered through periods of government overreach, incompetence, malice, and outright failure because they understood that the American people had the ultimate hand in dictating how the government is run and the voting booth would give them the opportunity to make a change for the better. Voting and elections were chaotic, exasperating, and sometimes frustrating, but we largely accepted them because they were seen as a legitimate reflection of the public’s voice.

With H.R. 1, the Democrats are disemboweling election integrity, sullying the sanctity of the voting booth and, most importantly, undermining Americans’ confidence that they control their own government and, by extension, their own destinies. The Constitution works only because people have confidence in its workings and their role in it. It’s that confidence that has bound Americans as one people and fostered an extraordinary nation for two centuries.  It would be tragic — albeit predictable — if Democrat schemes pretending to strengthen election integrity resulted in just the opposite and in doing so undermined the very ties that bind the nation together in the first place.

IMAGE: Voting when it meant something. Original 1918 image from the Library of Congress. No known restrictions.