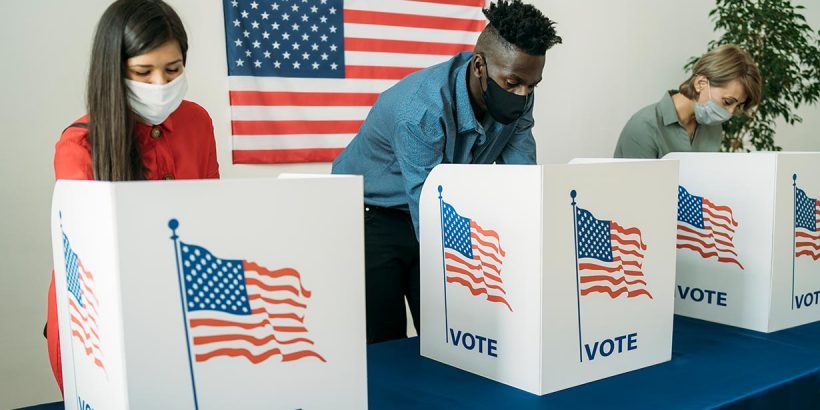 “There are hundreds of bills threatening to make voting more difficult in dozens of states nationwide,” says the statement by senior executives at corporations that also include Estee Lauder, HP, LinkedIn, and Levi’s.

“We call on elected leaders in every state capitol and in Congress to work across the aisle and ensure that every eligible American has the freedom to easily cast their ballot and participate fully in our democracy,” the business leaders wrote.

While the business leaders didn’t specify which election-related bills or legislative efforts they have in mind, they broadly took aim at initiatives that they claim “impose barriers that result in longer lines at the polls or that reduce access to secure ballot dropboxes,” an argument made by opponents to a recently enacted election reform law in Georgia.

In the wake of the 2020 election controversy, Republican and Democrat lawmakers across the country have been pulling in opposite directions by introducing legislation that either reduces barriers—and guardrails—to voting or seeks to strengthen election integrity, which can also make casting a vote more effortful or burdensome.

SB 202, or the Election Integrity Act of 2021 was signed into law by Gov. Brian Kemp, drawing praise from those who argue that more stringent requirements around voter ID, among other measures, make elections more secure, while sparking condemnation from those who view them as “voter suppression.”

Republicans, and other proponents of more secure voting, have argued that the reforms are necessary improvements to shore up integrity and build confidence in the state’s elections. The measures include requiring photo or state-approved identification to vote absentee by mail. They also mandate that secure drop boxes be placed inside early voting locations, with constant surveillance, and the law expands early voting across the state, addressing a key Democrat concern. The bill also shortens the election cycle for runoffs from nine weeks to four and requires a minimum of one week of early voting before Election Day.

Georgia Secretary of State Brad Raffensperger has responded to the criticism over the new law, saying, “There’s no rational argument against requiring state ID—provided for free to those who don’t have a driver’s license—for absentee ballots.”

Raffensperger dismissed voter suppression arguments, saying he implemented a version of the identification requirement during the November 2020 election, and that all absentee ballot requests that came through the state website were cross-referenced with a driver’s license database or another record.

“The left said that photo ID for in-person voting would suppress votes. It didn’t. Registration and turnout soared, hitting new records with each election cycle. Their cataclysmic predictions about the effects of this law are simply baseless. The next election will prove that, but I won’t hold my breath waiting for the left and the media to admit they were wrong,” he said.

“There is no middle ground here,” Chenault said in the letter. “You either are for more people voting, or you want to suppress the vote.”

“It does not promote principles we have stood for in Georgia around broad access to voting, around voter convenience, about ensuring election integrity,” he said. “This legislation is wrong and needs to be remedied.”

Kemp has responded to pushback from corporate leaders to the Peach State’s new election integrity bill, saying that he welcomes the criticism as an opportunity to debate the merits of the measure.

“I’m glad to deal with it,” Kemp told CNBC when asked about backlash from business leaders opposing SB 202.

“If they want to have a debate about the merits and the facts of the bill, then we should do that,” Kemp told the outlet.

“We have 159 counties in Georgia. One hundred and thirty-four of those counties under this legislation will be offering more hours of early voting, not less, so I would encourage these CEOs to look at these other states they’re doing business in, and compare what the real facts are to Georgia, and I think their focus will probably need to be in other places and not here,” he told the outlet.

Senate Minority Leader Mitch McConnell (R-Ky.) has also weighed in on the controversy, admonishing corporate leaders for their criticism of Georgia’s voting law in an April 5 statement, in which he accused them of falling for “absurd disinformation” and of “dabbling in behaving like a woke parallel government.”

“Our private sector must stop taking cues from the Outrage-Industrial Complex,” McConnell said in the statement. “Americans do not need or want big business to amplify disinformation or react to every manufactured controversy with frantic left-wing signaling.”

McConnell added that corporations protesting the law could “invite serious consequences” if they “become a vehicle for far-left mobs to hijack our country.”

Citing data that over 70 percent of Americans, including a majority of Democrats, support voter ID requirements, McConnell argued that the opposition to SB 202 was a way to build support for Democrat-led efforts to reform election laws.

“Washington Democrats want to pass a sweeping bill that would let them rewrite all 50 states’ election laws and turn the Federal Election Commission into a Democrat-run partisan body,” McConnell said.

“This power grab is impossible to defend, so the left wants to deflect. Instead of winning the debate, they want to silence debate by bullying citizens and entire states into submission,” he said.

The legislative thrust he was presumably referring to was H.R. 1, the For the People Act of 2021, which passed the Democrat-controlled House on March 3 on a largely party-line vote of 220–210, with all Republicans and one Democrat—Rep. Bennie Thompson of Mississippi—voting against it. The bill awaits action in the Senate.

Democrats—and other proponents—have framed the bill as a crucial step against voter suppression, while Republicans—and other opponents—argue it weakens security measures and makes elections more prone to fraud.

The Brennan Center for Justice, an advocacy group that pushes for progressive policies, counted 106 bills in 28 states designed to tighten voting standards so far this year, a significant jump from last year. At the same time, 35 states introduced a total of 406 bills to make voting less restrictive, also up from last year.