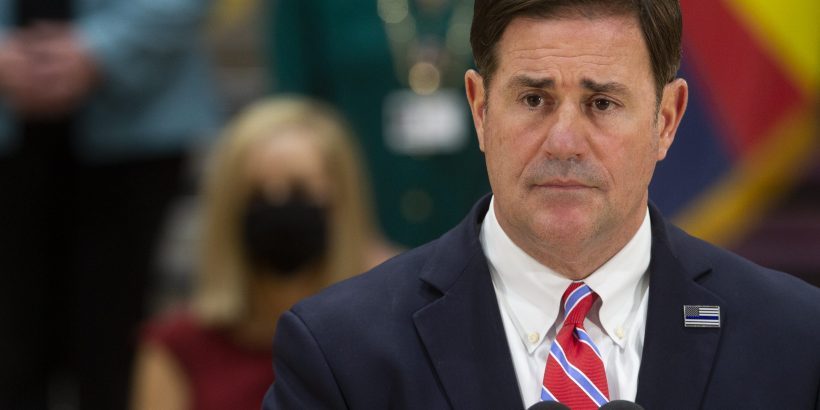 Arizona Republican Governor Ducey vetoed 22 bills on May 28, including measures relating to election integrity and Critical Race Theory, arguing that lawmakers need to focus on passing a budget.

“Today, I vetoed 22 bills. Some are good policy, but with one month left until the end of the fiscal year, we need to focus first on passing a budget. That should be priority one. The other stuff can wait,” Ducey wrote on Twitter. The governor, a Republican, said he won’t sign any more bills until a budget is passed.

Republicans in the state, including Arizona GOP Chairwoman Kelli Ward, noted that some of the bills that were vetoed include an election integrity measure and a bill that would prohibit entities from using taxpayer funds to promote the quasi-Marxist Critical Race Theory.

According to the Arizona Legislature’s website, House Bill 2792—which would bar the mass mailing of ballots to residents who did not request them—was vetoed on May 28 by the governor. The measure would make it a felony for an election official to send a ballot to a voter who hadn’t made that request.

Another bill that was vetoed by Ducey, Senate Bill 1074, would prohibit the Critical Race Theory training of government workers that “that presents any form of blame or judgment on the basis of race, ethnicity or sex,” reported the Arizona Mirror.

Ducey also vetoed Senate Bill 1514, which would have made the state’s Department of Housing provide emergency shelter for homeless senior residents in Maricopa County, among other pieces of legislation.

The governor also vetoed measures proposed by Democrats in the legislature, including two bills that would establish new testing and inspection requirements for marijuana dispensaries, the Mirror reported.

“Truthfully, I’m not happy about it, but it’s a civics lesson reminder that it takes 31-16-1 to be successful here. Sometimes we forget about the one,” Bowers told the Arizona Mirror. “I believe that the proposed budget is good, and I’m determined to keep working with our diverse caucus until there is unity to move forward. I’m optimistic that will happen soon.”

Ward, the GOP chairwoman, was more forceful in her criticism.

“Twenty two bills that the legislative branch worked all session on. Bills that went through the process & passed & went to the executive’s desk. This tyrannical approach is dangerous to what #WeThePeople in AZ support #ElectionIntegrity #StopCRT,” Ward wrote on Twitter, referring to “CRT,” or Critical Race Theory.

But Ducey wrote that the state will “have the opportunity to make responsible and significant investments in K-12 education, higher education, infrastructure and local communities, all while delivering historic tax relief to working families and small businesses.”

“Once the budget passes, I’m willing to consider some of these other issues. But until then, I will not be signing any additional bills. Let’s focus on our jobs, get to work and pass the budget,” he said, without making reference to election measures or Critical Race Theory.

However, State Representative Mark Finchem, a Republican currently running for Arizona’s Secretary of State office, said on “War Room Pandemic” that the state legislature didn’t pass a budget because it “has so much pork in it, you’d think we were going to a barbecue,” accusing Ducey of acting as a “petty dictator.”

The Epoch Times has contacted the governor’s office for comment.