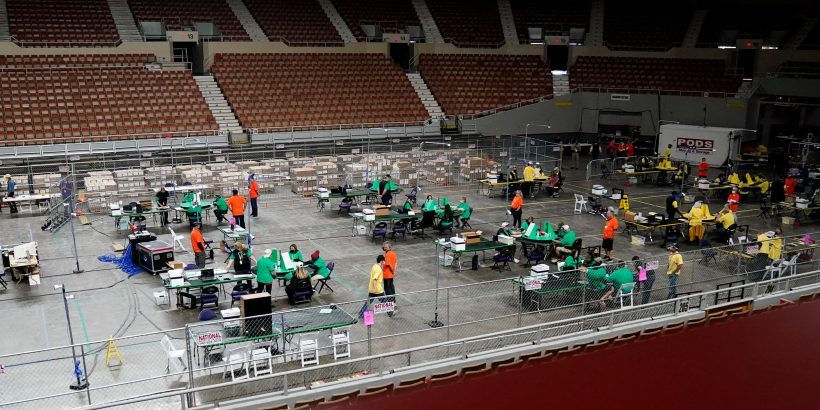 The Republican-led Arizona Senate served a new subpoena to Maricopa County officials seeking routers for its audit of the 2020 election. 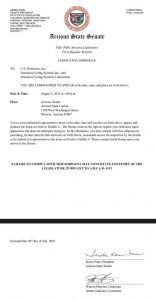 Bill Gates, a Republican member of the Maricopa County Board of Supervisors, revealed the development during an appearance Monday night on CNN.

“Right before I came on here, the board of supervisors received another subpoena from the state Senate ordering us to turn over the routers, in addition to some other information. And they threaten us in these papers that if we do not turn those over by Aug. 2 — so that’s next Monday — then we could be held in contempt,” he said.

Images of the subpoena, which includes a demand for the routers or “virtual images of the same” as well as the public IP of each router as part of a broader demand for election-related materials, were later shared on social media by local reporters.

Members of the audit team testified before the Arizona Senate earlier this month about information and materials they said they need to complete their review.

CyFIR founder Ben Cotton stated it is “critically important” to obtain routers owned by the county, insisting they would help clarify specific vulnerabilities he claimed existed in Maricopa’s digital election system. Cotton also said the county hasn’t updated the antivirus software on the election management system since “August of 2019.”

Maricopa County officials, who have resisted complying with all the demands of the Arizona Senate and auditors, have fought back against the push for router access, including a prior subpoena demanding “access or control” of them earlier this year.

Maricopa County officials, who opposed the Arizona Senate’s audit in court until a judge ruled its subpoenas were “legal and enforceable,” previously authorized two election machine audits that found no irregularities in the county’s 2020 election. There was also a recount of a sample of ballots that did not turn up any problems.

The state Senate previously considered holding members of the county’s board of supervisors in contempt in February over election-related materials, but the effort was defeated by one vote when Sen. Paul Boyer, a Republican from the Phoenix suburbs, broke ranks and joined Democrats in opposing it. The move could have landed county officials behind bars.

Boyer, who once claimed the audit “makes us look like idiots,” was recently singled out by former President Donald Trump, who gave a boost to his 2022 primary challenger.

“Boyer has been nothing but trouble, and nobody knows why,” Trump said on July 22. “All we demand is Voter Integrity!”

Republican state senator Michelle Ugenti-Rita called the Senate’s audit “botched” while speaking at a rally headlined by Trump in Phoenix on Saturday, receiving boos and condemnation from the audience.

Ugenti-Rita describes herself as an advocate for election integrity and is running for secretary of state in Arizona.

Gates told CNN that Ugenti-Rita becoming the second Republican state senator to criticize the audit shows that the fresh threat of holding Maricopa County officials in contempt is a sign of the GOP caucus getting “desperate.”

“The reality is the good people of Arizona know that this audit is a sham audit and that it’s time to move on,” he said.

The Washington Examiner reached out to the Arizona Senate for comment on the latest subpoena.

President Joe Biden won Arizona and its 11 electoral votes by more than 10,000 votes out of the 3.3 million across the state. His lead of roughly 2 percentage points was due partly to his advantage in Maricopa County, where the Democrat scored nearly 45,000 more votes than Trump among roughly 2.1 million ballots cast.

Biden was the first Democratic presidential candidate to win the Southwestern state since President Bill Clinton captured it in 1996.

After courts rejected several lawsuits challenging the 2020 results in Arizona and other states Trump lost, the former president and his allies have turned their attention to the GOP-led Arizona Senate audit in Maricopa County, touting it as an inspection that could support their claims of widespread fraud or irregularities.

Maricopa County officials announced last month voting machines subpoenaed for the audit would be removed from service after Arizona’s Democratic secretary of state, Katie Hobbs, threatened to decertify the equipment, citing concerns with the methods of Cyber Ninjas, a Florida-based firm hired to lead the review.

The U.S. Justice Department has also signaled it may take action against the audit.

Arizona Senate President Karen Fann says the audit is not about overturning the election but rather finding problems that could be addressed in election-focused legislation. Still, some in her caucus, including state Sen. Wendy Rogers, have called for recalling the state’s electors even before the audit is completed and its final findings are released.

State Senate Majority Whip Sonny Borrelli floated the possibility of introducing a resolution to “reclaim electors” if the audit’s findings put Biden’s 2020 election victory in doubt. Although audit officials predicted the audit would conclude by the end of the summer, testimony last week before the Arizona Senate indicated it could be drawn out if their request for more materials and information leads to subpoenas.